"The Ground Was Full Of Water. The Children Became Sick Because Of The Cold." 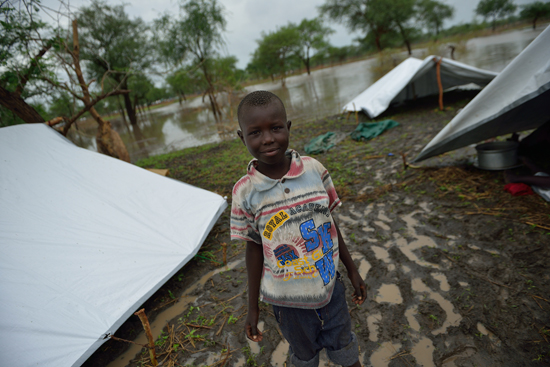 A young boy stands near the flooded makeshift shelters at the T3 transit site near Jamam. Heavy rains have complicated the transfer of thousands of refugees from these transit sites to the more permanent Batil camp.

Sheik Osman is 55 years old, a father of seven and a leader of 500 families from his village, Kwaimol. He fled Kwaimol in September, along with 18 of the families in his group. They have been living in Jamam camp since December.

"In September, the bombing of our village started. When the planes dropped bombs, they burnt everything, including the houses. The planes would come at night to drop the bombs, but sometimes they would come during the day. Then they would bomb all day. When one plane finished, another would come and take its place. We would run and hide in the grass and bushes.

When we ran, we went with difficulty. One man was carrying three children on his back. I was carrying two children on mine. I have seven children, but only five of them came to Jamam. The other two went missing in September when they were grazing cattle and I haven’t heard if they are alive. We would run and find somewhere safe and we would rest for one day, but then the planes would come again and we would run.

We were given food so the children could eat, but here, there is a problem of water. There are many people, so sometimes the water runs out. Usually around four o’clock, the water will be drained and sometimes there is not enough for cooking, so we save it for drinking.

In Kwaimol, life was comfortable. When we ran, we left everything – the cattle, the hens and the sorghum. Because of the war, we left everything there. Everyone left all their things when they scattered. I don’t think about the things I left behind. We came only with the clothes on our bodies. That is what we have been wearing until now. These are the shoes I was wearing when I left.

We spent four months traveling and finally reached El Fuj [the border crossing point] at the end of December. In El Fuj we had some rest, but then the planes came and bombed there as well. When we arrived in Jamam I was happy to be in a safe place with no fighting. We were given food so the children could eat, but here, there is a problem of water. There are many people, so sometimes the water runs out. Usually around four o’clock, the water will be drained and sometimes there is not enough for cooking, so we save it for drinking. Since we reached Jamam there have been many people sick. We walked such a long way and many people had joint pain and diarrhea.

The problem here is the flooding. When it rained last week, some tents fell down because of the flooding. The tents were flooded and everything was wet. The children were raised above on the beds to sleep, but the ground was full of water. The children became sick because of the cold. Some had coughs and fevers, so we took them to the clinic and they became better. Some had diarrhea and we took them to the ORS [oral rehydration salt] point and they became better. One girl has a fever, a cough and some chest pain and is not better yet.

We want to move to drier ground, because the Sheik in Jamam tells me that in August and September there is a lot of flooding and this area will be full of water. I think about my homeland and I want to go back. But I only want to go home when there is peace. Because of the war, we are still here."