Haiti: "If She Does Not Drink, She Will Die"

A nurse recently back from an MSF cholera treatment center in Port-de-Paix recounts what she saw, what was accomplished, and what remains to be done in the effort to battle the cholera outbreak in Haiti. 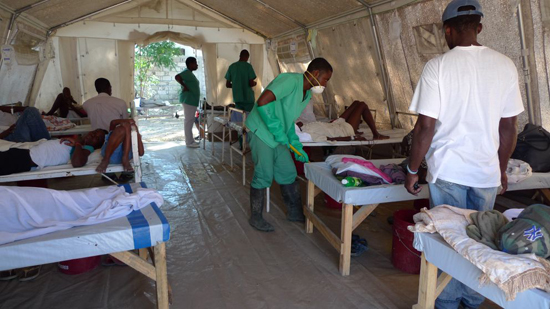 Haiti: A New Cholera Treatment Center in the North

Michelle Mays first went to Haiti with Doctors Without Borders/Médecins Sans Frontières (MSF) just after the earthquake last January. This November, in the midst of the cholera outbreak in the country, she returned to spend three weeks working as a nurse supervisor at MSF’s cholera treatment center (CTC) at a Ministry of Health hospital in the northern city of Port-de-Paix, one of the places hardest hit by the epidemic.

Overall, as of November 28, MSF had treated more than 41,000 patients in the seven weeks since the outbreak began, while continuing to maintain all of its other programs in Haiti. The organization now has 30 CTCs in the country and 3,200 beds dedicated to cholera treatment. Admissions are now rising in some areas, decreasing in others, and stabilizing in the Artibonite region, where the first cases presented.

In Port-de-Paix, Mays and her colleagues treated more than 2,100 cases in just three weeks. MSF teams have been able to bring down the case fatality rate in CTCs like the one Mays oversaw to less than two percent. But, as Mays recounts below, the sense of urgency and the need for continued vigilance, creativity, and training remains.

How did the program in Port-de-Paix take shape?

The exploration team found this hospital, and they had already started to treat some cholera patients, but there was no protocol. There was very little information. There were maybe two auxiliary nurses, which is like a nurse assistant, who were taking care of about 40 patients when the team first arrived.

The first thing that they did was to separate the cholera patients from the other patients, and all non-cholera patients were transferred to other locations. We had a small compound on the grounds that contained a few buildings and a small chapel, which all became very quickly overrun with patients.

We had to both look at it from a logistical perspective of space for patients, creating beds, but then also from a staffing perspective, because you can't treat many cholera patients with two auxiliary nurses. When I first got there, there were maybe three or four nurses who had been hired; a few weeks later, we had more than 70 nurses and needed to hire probably twice as many to take care of 150 patients daily.

And this disease was new to health professionals and patients alike, right?

They don't know cholera. They haven't had it in more than 100 years, so there's a huge learning curve. When you respond to cholera in a place like Chad or Nigeria, where it's endemic and they have it every year, it's really different because the population knows to visit a health facility soon after the onset of symptoms. But in Haiti, the learning curve is just enormous. And so you have people coming in half dead. Hopefully, you can save them and resuscitate them, but for many of them it's just too late.

And if they don't get treatment, that can be a matter of hours?

This is just the nature of cholera. It happens so fast. If you're not in the room at the right time, then a patient might die. I mean there are so many times when I would go and round on the patients and I would find people who probably would have died within an hour or two if they hadn’t gotten treatment. This is the burden that you carry with you and, in terms of training, you have to instill into the nurses and into the doctors the importance of making sure the patients are hydrated and that you're assessing them constantly. [Editor’s note: Cholera patients who receive care in treatment facilities often recover quickly enough to walk home after only two or three days.]

When I got there, there were about 40 or 50 patients admitted into the hospital. And we were already starting to think about how we were going to expand. Within days we had 100 patients, and then that doubled, and then every day we were getting about 100 to 150 new patients.

You had to adapt constantly?

It requires an immense amount of creativity. At one point, the doctor and I were just sitting there, pulling our hair out because we had no more space and we were getting streams of patients. And they were patients who needed IVs. So we said fine, we're putting two kids in each bed, which is really not ideal. But you do what you have to do.

You have to think quickly, you have to think creatively. You just have to make it work. I think we can feel proud that we're able to do that. We can feel like we were really able to serve to the community. I mean, it's so tangible. One time, this little baby came in so dehydrated, so close to death. And we were trying to get an IV in for 20 minutes. The baby was getting worse and worse. It was just awful. Finally, the Haitian doctor got it, and you almost want to cry, because this is why we're here.

Were you able to get to all the places you needed to go?

In some villages, we set up smaller CTUs, cholera treatment units, or an ORP, which is an Oral Rehydration Point. We were able to do it but, we weren't able to get there every day because it's the rainy season. You have to cross a lot of rivers, and sometimes you just can't cross the river. It's too unsafe.

There must have been a lot of fear, a lot of anxiety.

There were a lot of rumors going around about how to prevent it, about what caused it. A lot of people thought that if you drink oral rehydration salts that it would prevent cholera, so people would come to the hospital and just start drinking the ORS. And people also try to make a profit out of it as well, trying to sell different medicines and saying that this will prevent you from getting cholera. This is really dangerous because people think it will work. They start having symptoms, and they come [to the hospital] very late, sometimes too late. The best way to break fear is treating patients within three days. Then they go back to their community and share the message.

Was it possible to have any kind of routine?

Patients were coming starting at 5 AM, and the team was really tired from working the night shift, so we started coming earlier and earlier. You walk inside and you have to wash your hands and get your feet sprayed with this chlorine solution for infection control. There is one small tent where we have registration and a triage nurse who would figure out who needs immediate attention and who can maybe hang out and drink oral rehydration salts. And, really, anyone who can drink should drink ORS regardless of whether they have an IV.

In the morning, usually 20 or 30 patients would be waiting outside this tent. I would check in with the triage nurse, find the doctor who had worked the night shift, talk about what was going on, if there had been any deaths. If there were any really serious patients, I'd go see them first. If not, I started making rounds and asking nurses if everything was okay with the patients. And checking supplies, because they might have used up a lot of supplies overnight.

You have people who almost die five or six times, and thankfully you're there and you give them the fluid, and sometimes you need to give them glucose or potassium because their electrolytes are completely out of whack. We had a lot of patients like that. One woman was vomiting violently, continuously, and I really thought she was going to die. But she lived, and she told me when I came in to see her, "I want to leave. Can I go today?" It's always a nice sign because a day or two earlier she was right at death's door. [Editor’s note: At present, nearly 99 percent of the patients who are treated in MSF facilities survive the illness.]

Did you see evidence of the strain among Haitians with this outbreak coming on top of everything else they’ve endured this year?

Everyone who works in Haiti comments about resilience of Haitians, but you have to wonder how much is too much. It's amazing to work with these people who are coming in every day, some from far away, because they needed the work. The work is so hard. Nurses and doctors work 10 or 14 hour shifts. Everyone is exhausted and then you have to wake up and do it again the next day.

It takes an immense toll on them as medical workers, and as communities. These [patients] are their parents, friends, brothers, sisters. And in the north they weren't so affected by the earthquake but [they have been] incredibly affected by cholera. One of our drivers was telling me, “I've already had five or six friends die from this.”

Did you see the training having an effect, of staff learning better how to deal with this disease?

By time I left, people were really getting it. I think people were just so stunned in the beginning that it was hard to have the space to teach. But once that was there, and the information was reinforced, you had people starting to take a lot of good initiative.

There was this baby who was maybe a year old, and a sister, two or three. Their mother was really sick and their father had to work during day. He said, “If I don't go to work, I might lose my job and can't take care of my family. So I said, “Don't worry about it,” [and] the nurses really adopted this family, taking care of the baby and little girl.

These are things where community really bonds together. When I'd make rounds, if a little kid's mother wasn't there, the mother of the little kid next to her would be taking care [of the child], telling me “they had diarrhea this many times, vomiting this many times." It’s a very communal group of people, and that’s really good to see, because without that, I don't know what we would have done.