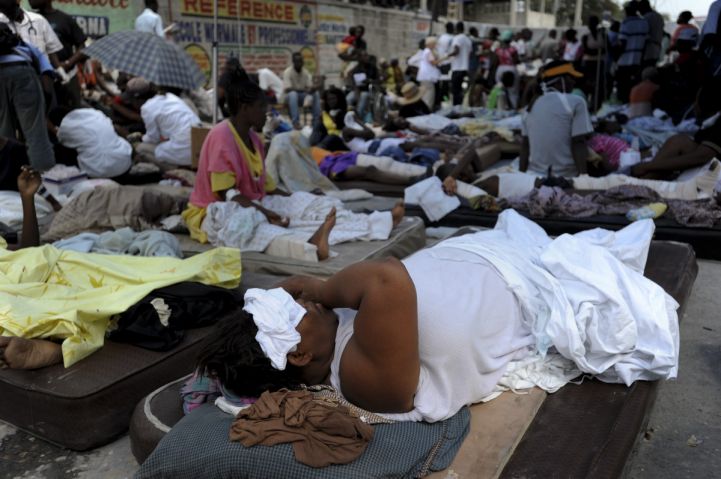 Isabelle Jeanson has worked in communications with Doctors without Borders/Médecins Sans Frontières (MSF) since 2003. She has spent time with MSF missions in Colombia, Russia, Nigeria, and Papua New Guinea, and she served as an emergency press officer in Sri Lanka following the 2004 tsunami. She joined the emergency team in Haiti 48 hours after the January 12 earthquake struck, and filed this report on the morning of January 21:

I had the scare of my life Wednesday morning. I had hoped I could sleep 10 extra minutes because I’ve been working on 5 hours a night for the last week and am hitting the bottom of the barrel.

No such luck. While still in my sleeping bag, I suddenly felt the bedroom floor rock back and forth. For a second, I thought maybe I was dizzy from being tired. But that thought faded when the rocking got stronger.

I jumped up, scrambled to the door in the dim morning light in my pajamas and ran downstairs to the locked front door. I didn’t have the key, but fortunately my colleague caught up to me to unlock it and we both got out.

I was shaking and on the verge of crying, and so was he. He had survived the quake last week, but he still had the courage to run back inside the house to get our two other colleagues out. My heart was racing. I finally understood the meaning of vulnerable, to be so exposed to this overwhelming force.

That was the start of the day.

In the afternoon, I spent a few hours at our field hospital in Carrefour. You enter through thick, gray plastic sheeting that is attached to two trees and spans a street in the middle of the town. First, you see the area where triage is done, where wounds are dressed, and where the inpatient ward is located.

It hurts to see so many injured children and adults, some of them screaming in pain when the nurse changes the dressing on their wounds. They have suffered serious burns, broken arms, and deep cuts in the skull. They have infected wounded, gangrenous limbs—and the list goes on.

The entrance to the hospital courtyard is through a small door in a gate. This is the surgical ward, which is basically a series of beds situated under two blue tarps and a tree. On one side, there are pregnant women who are giving birth or who need C-sections. On the other, there are three beds for patients who need more serious surgery, such as amputations.

Our teams are performing surgeries outdoors mostly because the staff are too traumatized to work inside the hospital building. Despite the conditions, in the five hours I was there, the team performed at least three amputations--two for young children--and a C-section. They also removed necrotic (dead) tissue from a young woman’s thigh.

Our team is tired. They have been working long, long hours in the heat, in crowded, noisy, demanding and stressful conditions. Fortunately, we found a spacious school building that was not affected by the earthquake just down the street from our hospital. We hope to move to this new location in the coming days.

The one shining light in all this physical and emotional suffering is the birth of healthy little babies. Eight healthy little new ones arrived today under the blue tarp of our hospital. We all need them to breathe new life and hope into this torn country.