Haiti: 'Patients who were not critical three days ago are now in critical phases'

"The situation remains critical. Few aid agencies are in place. Hundreds of bodies are still stuck in buildings. In the entire city, I've only seen about four or five trucks and cranes removing pieces of collapsed buildings so they can get the people out." 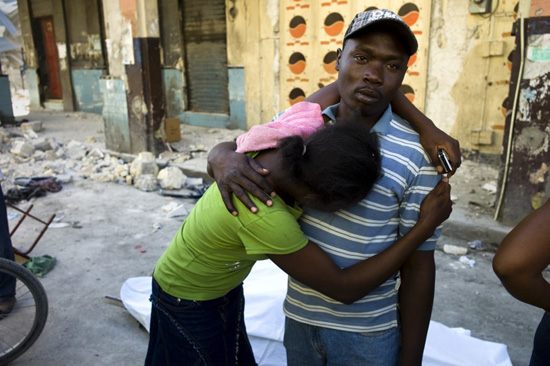 People grieve in a market area of Port-au-Prince three days after an earthquake struck the city.

Isabelle Jeanson, a Doctors Without Borders/Médecins Sans Frontières (MSF) emergency communications officer, has been with the MSF teams in Port-au-Prince since January 15. Here she describes the stuation as of January 17:

The situation remains critical. Few aid agencies are in place. Hundreds of bodies are still stuck in buildings. In the entire city, I've only seen about four or five trucks and cranes removing pieces of collapsed buildings so they can get the people out. 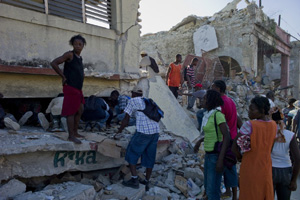 Earthquake survivors search under a destroyed building in downtown Port-au-Prince.

The smell can be overwhelming in some areas, particularly where corpses are rotting in the heat and where internally displaced persons (IDPs) are gathering. There is no sanitation. There are no showers or latrines, and hundreds of IDPs are gathering anywhere there is open space. At night, when we drive, we must be careful not to run over people who are sleeping on the road. I saw one person sleeping in the middle of an intersection, just to avoid any buildings that fall if there is another earthquake.

Yesterday, we experienced two more tremors. When the medical team started doing their work in the Carrefour operational theatre, the national staff continued working when the first tremor hit. But when the second one happened, the nurses dropped what they were doing and ran. People are still on edge. They’re afraid of sleeping indoors. I am a bit worried myself, and I didn't even go through the earthquake. We're sleeping in a tent in a hotel courtyard because there is not enough room for all the international staff at the office.

MSF teams at Carrefour did several surgical interventions. This was only 24 hours after setting up the operational theatre! This is totally amazing considering that the team went to Carrefour on Friday afternoon to start the setup, only two hours after the head of mission, a nurse, and I visited the empty hospital to do the assessment. I am in awe that our teams were able to set up this new and functional operational theatre in less than 24 hours. 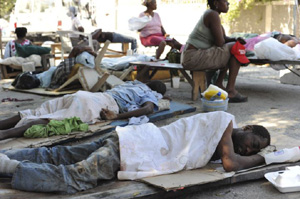 Patients in need of medical care wait to be seen in front a damaged MSF facility where staff are treating large numbers of people outside under tents.

We did an assessment in Léogâne yesterday, about one hour away from Port-au-Prince. We returned around 6 pm, in the dark. On the way back, we crossed some check points that had been set up by civilians. They were jumping on a pick-up truck that was carrying a load of corpses. They were very angry because the driver was going to dump the corpses in their town. They had set up checkpoints from that point on, all the way to Port-au-Prince, a distance of about 10km (6 miles). I would be angry, too, if someone was dumping corpses in my town. When we crossed the checkpoints they let us through, no problem, respectfully.

Small fires burn in the street. The air is smoky and smelly, and parts of buildings—concrete, wires, and debris—are strewn all over the streets. The crowds are smaller where we are based, in Petionville, though there are people sleeping along the lane going up to our other house, blocking access to the road. And last night, though the open windows, we could smell that horrible smell.

The team in Petionville is under a lot of stress. They have extremely limited surgical capabilities. I spoke to a surgeon yesterday, and he was so frustrated and stressed because he’d seen five patients yesterday who needed immediate surgery, but he can’t do it because he didn’t have a proper operational theater to work in. We need more space to perform surgeries. We need the inflatable hospital, if it ever arrives.

So, it's getting worse. Patients who were not critical only three days ago are now in critical phases. This means that people will die from preventable infections. It's horrible. It's really so terrible that people are begging for help and we can't help them all to save their lives!