Haiti: Saving as Many People as We Can 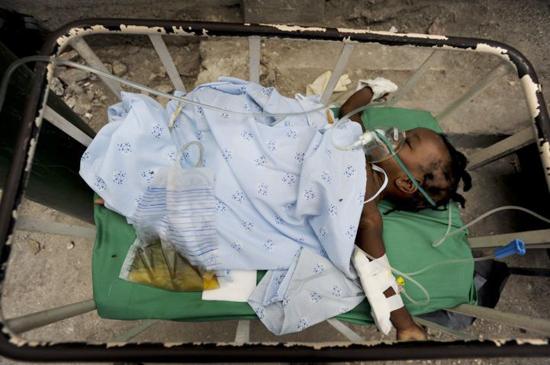 A child is stablized after emergency surgery in an MSF hospital in the Carrefour distrcit of Port-au-Prince on January 17.

Isabelle Jeanson has worked in communications with Doctors without Borders/Médecins Sans Frontières (MSF) since 2003. She has spent time with MSF missions in Colombia, Russia, Nigeria, and Papua New Guinea, and she served as an emergency press officer in Sri Lanka following the 2004 tsunami. She joined the emergency team in Haiti 48 hours after the January 12 earthquake struck, and filed this report on the morning of January 19:

Some people are now selling food in makeshift markets, and there is more traffic in the streets. There's also the regular sound of helicopters hovering overhead. More and more aid organizations are showing up and trucks and some cranes are steadily working through buildings in the city, searching for people who are still missing—though who knows how long it will take to dig through all the rubble.

Yesterday I visited the MSF operation at Trinite Hospital. There was a small baby, about six weeks old, lying on her side in her bed because her right arm had been amputated and she was covered in bandages. The auxiliary nurse told me her story. Sad and miraculous. She had been in the hospital when the earthquake hit. The building was partially destroyed. This tiny little girl fell through concrete floors and walls. Somehow, she survived and was rescued from the rubble. No one knows where her mother is, though. Chances are she doesn't have a family anymore.

A man with a gunshot wound was carried in on a stretcher. Two doctors jumped into action, first checking to see if he was conscious, then seeing if he could feel his arms and legs. Even though the gunshot had punctured his neck, they determined he was "operable,” which is to say that even under the limited conditions of our operating theatre—in this case, it’s been set up inside a converted shipping container—the team could still save his life. We're not sure who shot him or why.

The patients we are treating will end up leaving our hospitals as different people. Many must undergo amputations because their limbs were so badly crushed that there's no way of saving them. A colleague who is on his fourth mission with MSF told me he was amazed that MSF had the capability to bring together the human resources, logistics, and setup that is required to respond to this kind of emergency in these sorts of conditions. Amazingly, though, everyone here, including our Haitian staff, remains singularly focused on one common goal: saving as many people as we can.