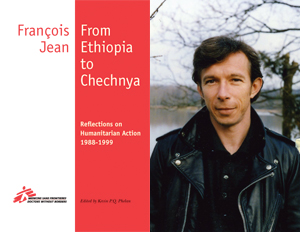 Photo courtesy of the family of François Jean.

This spring, Doctors Without Borders/Médecins Sans Frontières (MSF) will publish, From Ethiopia to Chechnya: Reflections on Humanitarian Action, 1988- 1999, a collection of essays from François Jean (1956-1999) translated by Richard Swanson. Jean contributed enormously in the field and at headquarters to the evolution and direction of MSF for nearly two decades. Born in Sainte Ménehould, France, he received a doctorate in sociology from the Institute for Political Studies, or Sciences Po, in Paris in 1979, as well as a diploma from the National Institute for Eastern Languages in 1980. After joining MSF in 1982 to establish medical and surgical projects in war-torn Lebanon, he went on to oversee emergency medical interventions in a variety of countries, including Chad, Pakistan, Sudan, and Chechnya.

Throughout his time with MSF, Jean wrote prolifically about the difficulties and challenges faced by humanitarian aid workers in a shifting political landscape. He helped create and edit the series, Populations in Danger, a collection of essays that wrestled with defining the scope and limits of humanitarian action, and contributed to many books, such as Ethiopia, A Useful Famine.

Over the course of this year, excerpts of Jean’s collected works will continue to appear in Alert. The book is for sale on our website. This first excerpt, “Necessary Independence,” was originally published in La Provence, a French journal, on December 20, 1997.

Murders in Burundi, Chechnya, Rwanda...kidnappings in Chechnya and Tajikistan. For several months such tragedies have been relentlessly on the rise; now humanitarian aid workers often pay dearly indeed for their efforts to deliver assistance to endangered populations. 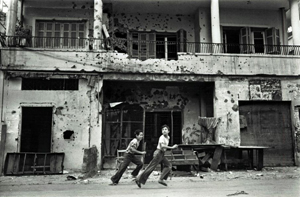 Children play in front of a bombed building in Beruit 25 years ago.

There has been a very real deterioration of security conditions for international organizations intervening in crisis situations. Yet this is not due to any radical change in the nature of conflicts themselves. Contrary to a widely held notion, the end of the Cold War has not brought us a period of disorder, anarchy, or chaos and violence that is bloodier, more senseless, or more irrational than ever before. Disillusioning though this may be for those who are nostalgic for a lost golden age, immunity for humanitarian workers has never existed, and relief organizations intervening in civil wars or internal conflicts have always faced a multitude of obstacles—as well as threats—in their efforts to deliver aid to victims of conflict or repression.

“François Jean was a great figure of humanitarian action. Few have matched his depth of commitment both to action and reflection. His intelligence, his willingness to ask hard questions, and perhaps more bravely and originally still, accept, even insist upon, sometimes ambiguous and unhappy answers, shine in this invaluable collection of his writings. they are a model—and thus very much still relevant today—of how to think about humanitarianism.” — David Rieff, author of A Bed for the Night: Humanitarianism in Crisis

Still, these troubles have increased in number in recent years, especially during that most perilous phase immediately following a cease-fire (which, in theory, should usher in a period of peace...)—a time when some armed groups begin to break down into detached, privatized, criminal gangs, reorganized on the basis of looting and racketeering. But the principal difference relates back to the aid system’s remarkable evolution over the last decade. At the close of the 1980s, the preponderance of international aid for crisis situations was distributed on the peripheries of conflicts in refugee camps, with only a few rare humanitarian organizations intervening directly to aid people trapped by the fighting.

Since then the number of relief operations in conflict zones has rapidly increased; there is now a profusion of UN programs and nongovernmental initiatives, Blue Helmets and multinational forces. At the same time, emergency aid budgets have grown six-fold, encouraging the blossoming of organizations without experience in crisis situations. A consequence of this rapid growth in the number of organizations of all sorts now present in arenas of conflict—private, state based, or even military—is that local populations and armed groups now have a more muddled perception of humanitarian actors. In some countries such as Somalia or Bosnia, humanitarian organizations are confused with the military. Elsewhere they are believed to be associated with their governments. In every case they are perceived to be rich and Western …

Under these conditions, it is more important than ever for humanitarian organizations to keep their distance with regard to the military, to outwardly demonstrate their independence with respect to political authorities, to leave established international circles in the capital cities behind in order to be nearer to the people—in sum, to reaffirm the core principles of humanitarian action: impartiality, independence, and solidarity. It is also fundamentally important in these crises, which in fact are not “humanitarian” but very much political in their violence and arbitrariness, to display clearheadedness, prudence, and determination, in order to preserve ourselves and protect the victims.