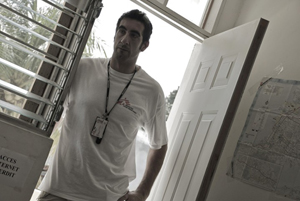 Despite ongoing conflict that has made it difficult for humanitarian organizations to be in Iraq, since 2006 Doctors Without Borders/Médecins Sans Frontières (MSF) has set up medical projects for populations in Anbar, Tameen, Ninewa, Sulemaniya, Baghdad, and Basra. MSF also runs a project in Jordan for Iraqi war wounded.

Khalil Sayyad recently returned from Basra, southern Iraq, where he worked as Field Coordinator for nine months. He was part of MSF's first international team to establish a presence in Iraq since 2004, when high insecurity led MSF to leave country.

In March 2008, when Iraqi government forces launched a military operation against armed militia in Basra, we provided supplies to the Basra general hospital in Nasiriyah. In the months following this battle, the security situation gradually improved. As a result, we were able to do some assessments in the area and consider starting a project with both expatriate and Iraqi staff. For the population, seeing foreigners return to Basra was a sign of stability and improved security. It also brought some hope that severe medical cases that had no treatment could receive attention, as we were training medical staff and providing updates on latest medical developments, techniques, and equipment.

What were your assessment findings?

Our assessment was focused on the hospital because although the security situation had improved, it was still volatile. We found doctors and surgeons who were very qualified and experienced, but in urgent need of medical updates. Also, during the conflicts in the last decades they would receive several patients into the operating theater at the same time. Basic standards would be forgotten so they could cope with the emergency. But this emergency mode had become a standard way of working. Therefore, we found Operating Theaters (OT) that were far from meeting minimum requirements. For example, they didn’t have a recovery room, patients were not monitored, material used was not properly sterilized, hygiene procedures were not there. All this increased risks of post-operative infections. Another great deficiency was in the anesthesia. There is a big focus on surgery, but anesthesia and bedside care, for example, were not given enough importance. And finally, they had a lot of equipment that had been donated in previous years, but which they were unable to install, use, maintain, or repair.

What kind of work did MSF decide to do? 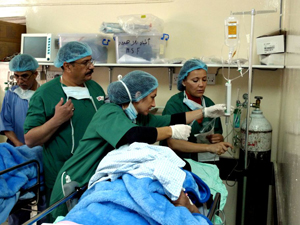 We identified huge gaps and needs in the emergency department and considered the possibility to work there. But staff in the hospital thought – and we agreed – that it was too early to start these activities. We were just coming back to the country and security was still an issue in Basra. We decided to work on improving the services in the General Surgery OT and ensuring patients had adequate care before, during, and after operations. We believed we could have a real impact there and at the same time work in a relatively safe environment. Also, for us it was an opportunity to be present and restart activities while the objective remained to start working in emergency when the circumstances allowed.

Did you have the impact you expected in the OT?

In nine months, things have really changed. First of all, hygiene has improved immensely. For example, after each surgery the room has to be cleaned before the next patient comes in, which did not happen before. We also changed the protocols of how our colleagues perform surgeries, introducing universal precautions such as one syringe per patient. There are now universal standards of hygiene and sterilization. We set up a fully operational recovery room and now the patients are properly monitored while they recover from surgery. We bought some biomedical equipment and repaired others that were not working, now they have functioning sterilizers, monitors, ventilators, anesthesia trolleys, and suckers. We also repaired the OT sewage system, which was not functioning properly. So we managed to increased the quality of care given to patients and, most importantly, reduce the risk of post-operation infection and minimize suffering of the patient. This is recognized by all surgeons in the hospital, as well as by the hospital director and the director of the Basra Health Directorate. To me, this was a big achievement. Our work is appreciated by our colleagues and now the doors are open for us to have a stronger presence in Basra.

What are MSF's next steps in Basra?

Basra General Hospital is the main reference for emergencies in Basra, most of the city's ambulances go there. But there are big gaps in services offered. We plan to start working in the emergency room in the next few weeks. We can make a real difference in the management of patients. From arrival to triage to the care provided in the very first hours, reducing loss of time and increasing the possibilities to save the lives of patients with huge traumas or other acute emergencies.

MSF supports eight hospitals in Anbar province and in Baghdad by training medical staff, supporting mental health counseling and providing medical materials. In the northern governorates of Tameen and Ninewa, MSF supports five hospitals by providing medical supplies, training staff, as well as supporting emergency response and health education campaigns. MSF also assists people who have been displaced to Dohuk governorate through the provision of psychological support. In Sulemaniya, in the North, MSF provides services at a hospital specialized in burns treatment. Each month, the hospital admits an average of 100 patients with severe burns and 1,600 patients are treated in the outpatient department. To continue providing valuable services despite the difficulties of operating inside some of the worst conflict-ridden areas, MSF has also established a program in Jordan. Since 2006, MSF has been offering reconstructive surgery for Iraqi war wounded in Amman. Over 660 patients have been benefited by surgery through this project.