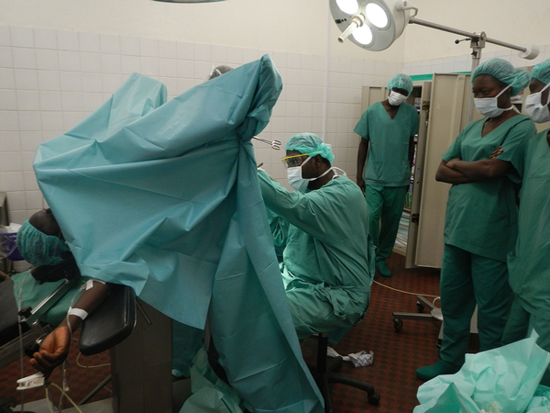 Dr. Valentin Vadandi operates on a woman suffering from an obstetric fistula in Abeche.

Trained with the aid of Doctors Without Borders/Médecins Sans Frontières (MSF), Dr. Valentin Vadandi is one of the few experts in obstetric fistula surgery in the world.

The calm of the operating theater contrasts with the bustle otherwise prevailing in the general hospital of Abéché, the largest city in eastern Chad. Dr. Valentin Vadandi puts down his instruments and removes his face mask. He has spent the last hour operating on a woman suffering from an obstetric fistula.

A Chadian surgeon employed by MSF, Dr. Vadandi has become a renowned specialist in these highly specialized operations. He participated in a round table organized by the Chadian Ministry of Health in early May in N’Djamena that focused on ways to improve the prevention, treatment, and social reintegration of women suffering from obstetric fistulas. That these discussions are now happening at all at these levels reflects the growing awareness of this condition in Chad. And Dr. Vadandi’s participation in them reflects his standing as one of the few surgeons in the country who can effectively perform surgery for this often debilitating condition, which occurs when a women undergoes prolonged labour without adequate medical care or supervision.

“An obstetric fistula operation can take much longer than an hour,” explains Dr. Vadandi. There are a host of cultural and medical challenges involved, chief among them the shortage of surgeons qualified to carry out the procedure. “The patients have often been operated on before by inexperienced doctors who’ve done more harm than good,” Dr. Vadandi notes.

If a pregnant woman goes into labor and has complications, but is unable to reach a maternity ward in time, the fetus usually dies and its head compresses the mother’s pelvis, stifling circulation. The prolonged lack of blood flow can cause necrosis of the tissue between the vagina and the bladder or the vagina and the rectum. The result is a fistula, or an abnormal opening that causes urinary and/or fecal incontinence thereafter. Women with this condition live in shame and are often rejected by their families and communities.

Chad is particularly affected by this phenomenon due to the vastness of its territory and the widespread lack of access to maternity and obstetric care. There are an estimated 450 new cases of fistula each year in the country.

Dr. Vadandi first began to appreciate the problem when he was working as a general doctor in a maternity unit in the south of Chad. He then went to Dakar in Senegal to specialize in urologic surgery, writing a thesis on the treatment of obstetric fistulas in that West African country.

When he returned to Chad, MSF had just launched a program to treat fistulas at Abéché General Hospital. The international medical organization was looking for a surgeon and Dr. Vadandi had both the training and the extra advantage of being Chadian. He started working for MSF in 2009 and continued his training with international experts in Chad and Nigeria. Today, he can successfully operate on even the most complicated fistula cases.

A Chance to Start Over

In 2009, MSF built a "Women’s Village" adjacent to the hospital. The village has a large courtyard, where patients with fistulas are cared for. Their stay can last from several weeks to up to three months. Extenuating circumstances are common. Some of the women come from such isolated and food-insecure places that they are suffering from malnutrition. Others, who have been handicapped by their fistulas for so long, must learn to walk again.

A butterfly adorns the entrance to the Women’s Village, symbolizing the metamorphosis of mothers who lived in shame and are now starting a new life. Having a fistula surgically repaired can give a woman back some of what she lost from the original injury, but, after the various traumas that have been endured, it is not a simple process. In addition to medical care, psychological support is provided to help women reintegrate into their communities. Income-generating activities are also organized.

Since 2008, MSF has treated 642 fistula cases in Abéché. In roughly 10 percent of them, it has not been possible to close the fistula. Previous unsuccessful surgeries, likely by unqualified surgeons, are a factor because success rates are higher when a fistula has not been operated on before. Around 20 percent of the patients saw improvements, though some incontinence remained. Approximately 70 percent of the operations, however, had perfect results, meaning the the fistula was closed and continence was restored. Several women have even given birth again (by caesarean section) after being operated on and have returned to their partners and communities.

Dr. Vadandi, for his part, finds the work deeply fulfilling. “We’ve increased our capacity and I’ve broadened my knowledge,” he says. “But the biggest reward is the gratitude of the patients.” And, he adds, with evident satisfaction, “Thanks to the awareness-raising work done throughout the region, fistulas are no longer seen as a curse.”