Indonesia: "Most of the people are still afraid of another earthquake" 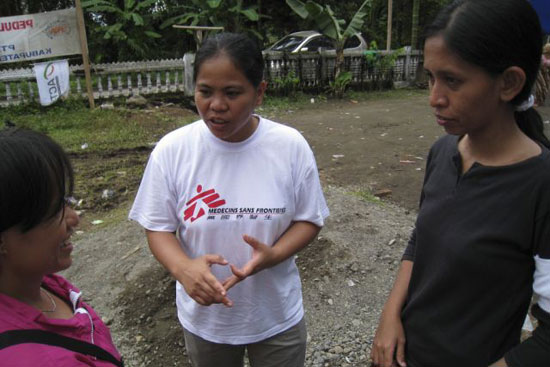 Indonesia: One Month After the Earthquake

Millions were affected by the earthquake that hit Sumatra on September 30 as massive landslides burried entire villages. Here is some of the stories told by MSF patients:

“I was very upset, because I lost everything, my house and my family members.”

- Zaidir, 37, was living in Kampung Panas, a village close to Pariaman, when a landslide caused by the earthquake killed seven of his family members. He does not want to go back to his village again.

“I was praying in my home alone. When the earthquake happened, I ran out and a coconut tree fell on me and I was buried under the soil. I could only feel pain in my leg. I prayed all night.

My mother cries every day. Once I see her crying, I also cry. I want to resume my normal life and work again with my mother and family.”

- Ismael, 23, was living in Lubuk Laweh village near Pariaman with four family members, when a landslide destroyed his village.

“I was sleeping in my house. When the earthquake happened, I ran outside and I was under the soil in 10 seconds.

I heard many people calling for help, but after a while, it fell silent and I knew that I was the only one alive."

- Dedi Hendra, 18, from Lubuk Laweh village near Pariaman, was trapped under a landslide but managed to dig his way out.

“I can sleep at night, but I still feel sad. I do not tell other people but keep it in my heart. At first I was afraid to go back into the house, because I worried that another earthquake would come. But my parents told me not to be afraid, so I went with my father.”

- Alvin, 10, lived with his family in Bari village near Padang. His family lost their house in the earthquake but Alvin and his brother helped their father rebuild it.

Daisy Plana, a Philippine psychologist working for Doctors Without Borders/Médecins Sans Frontières (MSF), has been providing mental health support to victims of the violent earthquake that hit Sumatra, Indonesia, on September 30, 2009, in the rural areas around the coastal city of Pariaman.

What is the extend of the need for mental health support in the villages?

There is a huge need. The people are still frightened and find it difficult to sleep. Some, who have lost members of their family are getting better, but they still have difficulties living from day to day.

Because most of the people are still afraid of another earthquake, the most important issue we are dealing with is helping them prepare for another emergency.

Not many of the villages that I visit are affected by the landslides, so there are only some specific areas where we need to focus on providing deeper psychological support. We are trying to reach these villages to help the people to stabilize and show them how to handle stress.

What kind of activities is MSF providing?

We are helping both adults and children prepare for earthquakes and other natural disasters. We are also giving educational mental health sessions on how to handle different stressors. We help them stabilize by showing them that all the psychological reactions they have experienced are normal. If they feel that they need more psychological support, we offer further group or individual counseling.

"Their culture makes it very difficult for people to talk about their feelings and what they are thinking."

If we have time, we organize playing and sporting sessions with the community as a form of therapy and release. We are donating sports equipment to help motivate people to return to the activities that they used to do before the earthquake. We are getting the children to sing, draw and play with other children again.

What challenges do you face when providing mental health support?

The first is language. In most of the villages where we are working, people speak Bahasa Indonesia which is the language our field workers speak. But in villages, where people only speak Bahasa Minangkabau, we need interpreters and if a lot of people, say 100, join our sessions we find it difficult to deal with everybody, especially the elderly.

Also, when we translate—sentence by sentence—people become bored and leave the activity one by one. So, it is better if we have someone who can speak Bahasa Minangkabau.

The second challenge is culture. We need time to build up trust with people because it seems that mental health and psychological support is very new to the villagers. Community leaders are reluctant to have mental health assistance in their communities so we spend more time with the people talking to them and implementing big group activities to help them understand how important mental health is and why we need to support them.

Their culture makes it very difficult for people to talk about their feelings and what they are thinking. Sometimes, in the middle of an individual consultation, they will run away from the counselor because they are unwilling to speak their mind.