"It's Really a Delicate Balance": An MSF Doctor in the Jamam Refugee Camp

Kirrily de Polnay, an MSF doctor working in South Sudan's Jamam refugee camps talks about the situation, the patients, and the nature of working in fast evolving emergency. 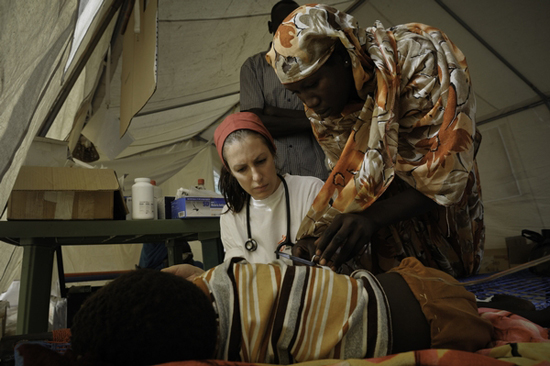 Dr. Kirrily de Polnay is working with Doctors Without Borders/Médecins Sans Frontières (MSF) in the Jamam camp in an isolated region of South Sudan, where thousands of refugees from Sudan's Blue Nile State are currently seeking sanctuary and the coming rainy season threatens to make delivering humanitarian aid even more challenging than it is now. Here, she talks about the situation in Jamam:

I’m constantly in the MSF hospital and so kind of isolated from the refugee camp. So that means that most of the patients you see are very polite, they’ve done that thing that people everywhere around the world do – make themselves look nice for the doctor – so they look nice, they are polite and you can almost forget that you are in a refugee camp, because you get the feeling that they have made an effort.

And it’s only when a child comes in who’s had diarrhea for one month and they’ve arrived from [the border crossing point in the village of] El Fuj the previous night, and they’ve had nothing to eat or drink for two days, and they’ve had five seizures during that day, that you suddenly remember where you are.

And the parents are so stressed. They’re so worried, and you descend on the child and it’s drips in, lines in, anyway you can get something in… And the children you are dealing with are often malnourished, so you have to do everything incredibly gently because you can tip a child into heart failure or into pulmonary edema so easily. So it’s a really delicate balance. You’re not dealing with healthy children who have become sick. You’re dealing with children who already have very low reserves.

We have so many cases of diarrhea and you’re trying to explain to them how to make the ORS [Oral Rehydration Solution] and they don’t have anything to make it in. Even I can find it hard to judge exactly half a sachet, and you tell them, "whatever you do you must drink water, you must drink the ORS we give you." And they nod and say yes, but you know that they do not have enough water to really do that. They’ve only got a few liters a day. So what we are prescribing, they don’t have. And so you feel like you are trying to put a tiny plaster on a big hemorrhage.

So far, we’ve all been sharing the night shifts. Especially with the severely malnourished children, you have to be there constantly, balancing giving them enough fluid with not putting them into heart failure. At the moment we’re able to do that, but I don’t know how much longer we’ll be able to work at that kind of pace.

There was one patient, quite young, two or three years old, who came in and we thought, this is it, it’s over for this one. Luckily we had just installed the oxygen machine, so we started with the oxygen, gave all the treatment, and by the end of the day the kid was complaining that he wanted to go home! And that is so incredibly pleasurable. When a child starts to annoy you, you know that things are going well. In the end, with cases like that, we keep them in overnight. I mean, he came in dying and you can’t just send him home later the same day… But sometimes you get these recoveries where they bounce back like that.

You also get some amazing recoveries when we refer a patient to Doro, where MSF has a bigger field hospital. You spend a couple of nights wondering how the patient is doing. Today for example, I saw a little seven-year-old boy who I absolutely did not think was going to make it. He was extremely sick and we don’t have the diagnostics here to know exactly what was wrong. When he left, it was all a bit of a rush. The grandma hadn’t been home, she literally had to get in the car and go right there and then.

She was weeping. It was heartbreaking to see her cry, and you could tell that she was scared and lonely. And she came back today, big smile on her face, shaking everyone’s hand, making the little boy shake everyone’s hand. And that can make an unbelievably bad day completely bearable.

Three-way translation, what a thing… It’s very hard, and the translators get tired, because I’m going through the tribal language and then through Arabic to English and back again. And frequently you get four children, say, who have come in with the grandma, or an older sister who doesn’t necessarily know exactly what has been happening. And they expect us to be mind readers, who can just guess what’s going on. And we try to explain that we cannot help unless they tell us. But this seems very strange to them, because we have stethoscopes and a stethoscope should be able to work out what’s wrong with anyone, surely? I know that the translators find it hard. Any translation is hard, but this is really hard.

On my first night here, there was a very sick child that we were staying up all night with. We were told there was another very sick child at the gate, so I went to the gate leaving the sick child alone for a few minutes so I could see the child at the gate. And as we walked over, the guards were killing this massive snake on the ground. And these are the moments you have to laugh, because it’s such a ridiculous situation… your headtorch is falling off and you’re falling down the Armageddon cracks in the ground and there’s a huge probably venomous snake. It’s quite extreme, so if you don’t laugh it’s hard to know what the alternative is.