Kala Azar in Southern Sudan: "Access To Health Care Since Wartime Has Been Very Challenging"

"We found that two factors were irregular this year. First, it was highly unusual that cases would begin as early as July. This is seven weeks earlier than last year. Secondly, the high number of cases..." 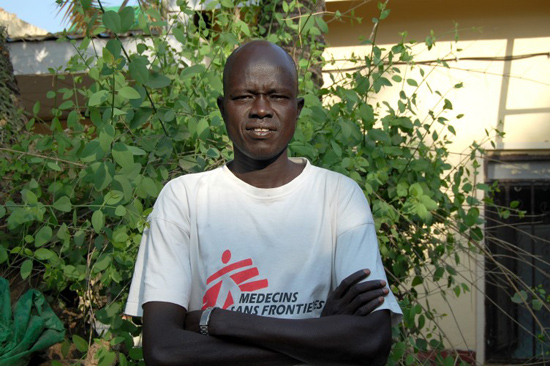 Doctors Without Borders/Médecins Sans Frontières (MSF) is responding to an outbreak of the neglected disease kala azar in Malakal, Upper Nile State, in southern Sudan. This year, teams are seeing eight times the number of cases of the disease as they saw last year. Kala azar is fatal if left untreated.

Moses Chol Maper is MSF’s emergency coordinator for the response. He comes from Lakes State in southern Sudan.

We began receiving reports that there was an outbreak of kala azar early this year. Kala azar is a parasitic disease caused by the bite of a sandfly. Symptoms include a prolonged fever, weight loss and enlarged lymph nodes.

We came to Upper Nile and Jonglei states to verify reports of the outbreak. We found that two factors were irregular this year. First, it was highly unusual that cases would begin as early as July. This is seven weeks earlier than last year. Secondly, the high number of cases: MSF teams has treated almost eight times as many cases this year as the same time last year—2,049 patients in 2010 versus 231 in 2009.

Looking at the past, there have always been factors that contribute to big outbreaks. In the 1980s and 1990s during wartime, there was a huge outbreak whereby tens of thousands of people were affected by kala azar. Because of the insecurity, people fled their homes into the bush, often in the acacia tree forests. The sandflies cannot tolerate the heat or light of day so they hide in the cracks in the black soil and the bark of the acacia tree, biting at night time. Forced to sleep outside under these trees, without protection of nets and lack of proper nutrition, they were highly susceptible to contracting kala azar.

Malnutrition also contributes to high numbers of kala azar patients. First, kala azar itself causes malnutrition—episodes of high fever mean that the patient loses their appetite and begins to lose weight. Because they aren’t eating, they aren’t storing proteins which make up the immune system and this low intake of food makes kala azar even worse. Secondly, those who are malnourished previously are then more prone to contracting kala azar because their immune system isn’t strong enough to fight the parasite. Then they risk further malnutrition with the disease itself. Monitoring the nutritional intake of our patients is priority number one alongside the kala azar treatment.

Access to health care since wartime has been very challenging in southern Sudan. With the peace agreement signed in 2005, it was thought that the situation would improve, but it didn’t happen. Access to primary health care is still very poor in most of southern Sudan, simply because of the physical difficulty of reaching a clinic. In the rainy season, it is practically impossible to travel by road. People must either fly or go by boat, but the majority of people cannot afford a plane ticket, boat fare, or the car fare during the dry season. So many people are forced to walk to find a health clinic, at least a few hours, if not two, three, or four days’ walk, which is so difficult when ill. If they are so weak they cannot walk, one of their family members must carry them in a hammock or stretcher all the way to find a clinic.

My biggest concern now is the return of so many southern Sudanese for the referendum to areas with kala azar. They have no immunity against the kala azar parasite and they are arriving during the active transmission season. As it takes a few months for the symptoms to appear, my concern is that the next season in 2011 will be a big challenge with numbers much worse than what we are seeing now in 2010.