MSF Dr. Susanna Ericsson describes the experience of a patient in Shamwana, where ongoing fighting between government forces and militias has forced thousands of people to flee into the bush. 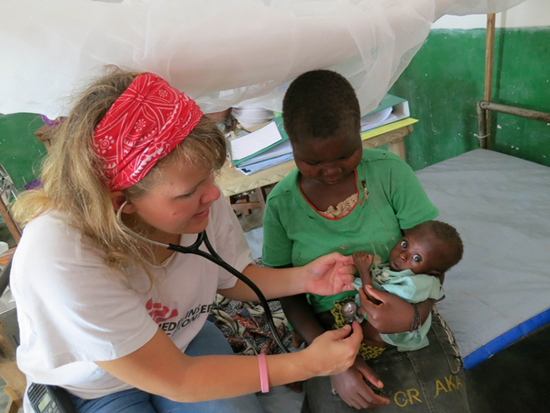 Dr. Susanna Ericsson works for Doctors Without Borders/Médecins Sans Frontières in the Democratic Republic of Congo, where ongoing fighting between government forces and Mai-Mai militias in Katanga province has forced thousands of people to flee into the surrounding bush fearing for their lives.

The medical consequences of this displacement are severe. Many patients cannot reach health facilities for essential medical treatment, and pregnant women who experience complications during delivery are particularly at risk. Here, Dr. Ericsson describes the experience of one such patient.

Our patient arrived early in the morning the day after we removed all non-essential staff from the project. She was the first person to be taken care of by our emergency “skeleton” team.

She was 23 years old, and came from a small village called Kilenge that has no health care facilities at all. The village is 25 kilometers [about 15 miles] from Kafumbe, where there is a small health post. There has not been anybody working at the health post for a long time because of the fighting and because there is a lack of health personnel and medicines in this region.

On the fourth day, the baby still hadn’t been born and her family was very worried as she had developed fever, smelled very bad, and the pain was worse than ever. At 3:00 am that morning the family set out for Shamwana where MSF runs a hospital offering free medical care to all.

It took the family 48 hours to reach MSF’s hospital on foot. The patient was transported on a bicycle, and 10 men and 4 women came along as protection, since the roads are not safe, and they were worried about an ambush.

Upon arrival at the hospital in Shamwana the patient immediately went into emergency surgery. A serious infection had already spread though her body and her baby had died. There is no doubt that without the surgery provided by MSF, the woman would not have survived.