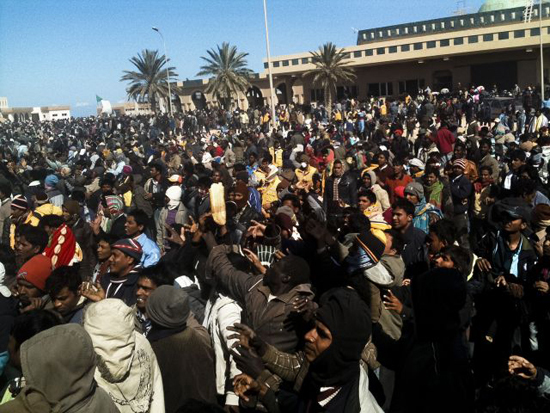 Migrant workers and others who fled the violence in Libya and are now at the Tunisian border awaiting repatriation to their home countries.

As violent clashes continue to convulse Libya, a Doctors With Borders/Médecins San Frontières (MSF) team is working in the eastern town of Benghazi, supporting medical facilities and trying to access strife-affected areas to treat the wounded. Another MSF team has been deployed in Ras Ajdir, just over the western border with Tunisia, ready to cross into Libya with medical material as soon as it becomes possible to do so. That team is being denied access into Libya, however, while the wounded inside the country are reportedly not being allowed out. MSF’s priority is to gain immediate access to this population.

Meanwhile, thousands of people, the vast majority of them non-Libyans fleeing the country, are waiting for repatriation to their respective countries. At the Tunisia-Libya border, MSF has identified the need to provide mental health care.

Ivan Gayton, MSF’s Emergency Coordinator, explains the situation at the border and what MSF is doing.

Many people who have crossed the border have told us that injured people are not allowed to leave Libya. Contacts with medical staff inside Libya tell us that they have wounded patients and lack material and drugs. The main pathology we are hearing about is trauma. We are in a deeply worrying situation where the wounded are apparently blocked on one side of the Libyan border, and medical staff and supplies are blocked on the other.

Do you agree with the reports that say there’s a humanitarian crisis on the Tunisia-Libya border?

Although people fleeing from Libya are going through a very difficult situation, at this moment, we cannot talk about a humanitarian crisis at the Tunisia-Libya border as such. This is thanks to the admirable response offered by the Tunisian civil society and the authorities, who have been working hard to meet the needs.

However, this massive influx of people is putting increasing pressure on transit camps and the situation is very fragile. If the number of people crossing the border continues to increase, the camp’s capacity risks reaching the saturation point. As of March 3, 91,000 people, the majority of them migrant workers coming from Egypt or Tunisia, but also from other African countries, as well as Asian countries, had crossed the border. These people tend to be healthy men, and medical teams have seen no serious health concerns among this population.

Generally, there have been strong efforts to make the outflow of people repatriated to their country keep pace with the inflow of people crossing the border. Tunisia has been responding to the massive influx of people with astonishing generosity. We have seen hundreds of Tunisians carrying private donations of food, water, blankets, firewood, and other materials.

What is MSF actually doing at the border?

First and foremost, our presence here, both in terms of our medical staff and our supplies, means that we are ready to intervene as soon as we gain access into Libya. We are seeking immediate access in order to treat the wounded, who are reportedly not allowed out, while doctors and critical medical supplies are not allowed in.

Secondly, we are closely monitoring the situation at the border, in case a medical-humanitarian intervention is required. MSF’s experience tells us that even if the situation is under control now, it does not mean that we should not be prepared for every possible scenario.

Thirdly, we are starting activities as we speak to support the ongoing efforts that the actors present here–civil society, governmental and non-governmental–have expressed a need for.

Which activities has MSF started at the border?

Our medical team has started giving medical consultations, in collaboration with the Tunisian health infrastructures and Red Crescent, which have been coping well with the situation. Until now, we have seen no severe pathologies amongst people crossing the border, most of them suffering from colds, headaches, and stomach aches. We continue monitoring the situation, although, at the moment, it is very much under control.

Meanwhile, having spoken with migrants in transit as well as other humanitarian actors on the ground, we have detected the need to immediately implement a mental health program. Many of the people having crossed the border have witnessed or themselves undergone various levels and forms of violence while they were in Libya. They are now waiting to return to their home countries and face great uncertainty for their immediate future, which is in itself an additional important stress factor. For this reason, we are starting a mental health care program, providing psychological consultations to patients referred to us by doctors at the border.

The team is also being reinforced with additional medical staff and supplies and is equipped and prepared to assist any wounded people inside Libya.