Terri Morris, MSF Head of Mission in South Sudan, gives us a look at the situation in what will soon be the world's newest country. 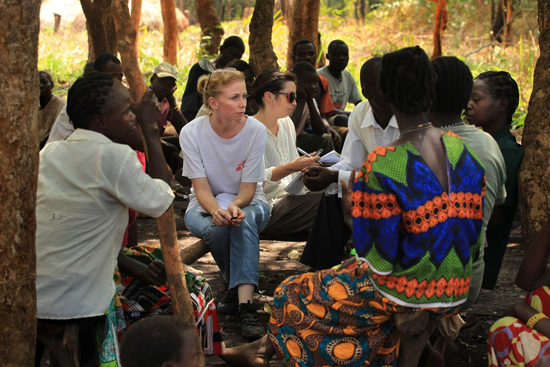 Terri Morris holds a meeting with South Sudanese refugees who fled from attacks on their villages to the Berezawa Internally Displaced Persons Camp.

Terri Morris has been working as a head of mission for MSF in South Sudan for the last nine months. In anticipation of the formal declaration of South Sudan's independence on July 9, Morris gives us an overview of the medical and humanitarian situation in what will soon be the world's newest country.

What is the current situation in the country?

South Sudan is experiencing a massive humanitarian emergency: the people have acute needs now and will continue to do so in the coming years. The situation is already critical in terms of the availability of healthcare. Added to this, the civilian population has borne the brunt of emergency after emergency: regular, violent clashes resulting in death, injury, and mass displacement; the arrival of 300,000 people returning from the north; and chronic malnutrition and frequent outbreaks of diseases such as kala azar, measles, and meningitis. The humanitarian response to these repeated crises has often been complicated and delayed. Prevailing logistical challenges make it difficult to reach people and provide lifesaving assistance.

Since February 2011 there has been a marked increase in violent clashes in South Sudan and the contested border areas between the North and the South. This has resulted in an increase in the number of violence-related trauma patients, some of whom are being treated in MSF’s medical facilities. But too many people in need of care—often the most vulnerable, including women and children not suffering directly from violence-related trauma—never make it to a medical facility.

The heightened hostilities between both sides and violent attacks by the North in contested border areas like Abyei and South Kordofan, in addition to similar patterns of violence on the border between South Darfur and Western Bahr El Ghazal, are making media headlines In the lead-up to the South’s independence from the North. However, other violence has also claimed lives and displaced people this year, but has rarely made it into the news. This includes intertribal or intercommunal-related violence, cattle raiding, and the rise of new Southern militias.

What are the consequences of the violence and insecurity?

The violence has taken a massive toll on the civilian population, causing death and displacement in states across South Sudan. An estimated 210,000 people were displaced by violence in South Sudan in 2010.[1]

In Western Equatoria State, for example, at least 18 incidents related to the Lord's Resistance Army (LRA) have resulted in abduction, death, or displacement in 2011, creating fear and anxiety among communities who are already struggling with high burdens of disease, limited access to basic services, and an uncertain economic future due to the disruption to their farming cycles.

Insecurity increases vulnerability to disease, particularly communicable diseases and malnutrition, and further restricts people's access to healthcare. It prevents many people from traveling to seek treatment, whether it is for violence-related injuries or for another medical problem. The various levels of insecurity also affect supply routes, hampering not only trade but also the delivery of drugs and medical supplies.

What is the health context in South Sudan?

In Sudan, 75 percent of people do not have access to even basic healthcare. Critical gaps remain for basic medical services, and particularly for emergencies. Currently, more than 80 percent of healthcare available in South Sudan is provided by international non-governmental organizations (NGOs).

While the context is rapidly changing—a Ministry of Health is being established and there has been a marked influx of NGOs—it will take the government of South Sudan many years to establish a functioning health system that can meet the needs of its people.

The extreme shortage of trained, skilled health workers in South Sudan is a major concern. MSF is investigating how it could play a role in improving the situation. For example, in Yambio County, in addition the usual training we offer South Sudanese staff working with MSF, we are focusing on malaria. We are training local health staff in rural health centers, donating medical supplies, and providing on-site support and supervision to improve the early diagnosis and treatment of simple malaria. People with severe and complicated malaria are referred to Yambio State Hospital, where MSF provides free healthcare to children and pregnant women, the groups most at risk from severe malaria.

What are the health needs in the country?

Women and children are the most vulnerable to the lack of access to healthcare. South Sudan has some of the highest maternal and infant mortality rates in the world. Many women in labor have to walk for hours or even days to reach a health facility. If they make it, it is often too late.

Food insecurity is increasing. The seasonal hunger gap started in May, and this year the levels of malnutrition are expected to be higher than last year because of violence and insecurity.[2] More people will need access to limited food supplies, including more than 300,000 returnees,[3] as well as the 210,000 people displaced by conflict. In addition, food and fuel prices are rising for several reasons, including blockages of routes from the north.

Malaria is endemic in South Sudan and hyperendemic in Western Equatoria State. In 2011, MSF has already treated more than 10,000 people for malaria.

Are there a lot of returnees coming back from northern Sudan?

An estimated 300,000 people have returned to South Sudan–the influx appears to have slowed since the referendum in January. These people are particularly vulnerable. They tend to have poor immunity to diseases such as kala azar and are at increased risk of sexual violence. They are also in a difficult socioeconomic position, as they face problems accessing and cultivating land.

What is MSF’s response to the situation?

In addition to running its regular basic and specialist healthcare projects with a specific focus on maternal health and on children under 15, this year MSF has also sent emergency teams to assist people wounded or displaced by violence in Malakal in Upper Nile State, Bentiu in Unity State, Akon in Warrap State, Bor in Jonglei State, and the towns of Mvolo, Gangura, and Tambura in Western Equatoria State. These teams have set up regular mobile clinics to ensure that displaced people living in remote areas can access healthcare. They have carried out measles vaccinations and distributed relief items and emergency food rations.

In this humanitarian emergency, MSF will continue to provide essential medical aid where the needs are greatest, and where we can be of most relevance and benefit to the population. Improving access to healthcare and improving its emergency response has to be a priority for this new country. However, the government of South Sudan has allocated just 3.7 percent of its budget to health in 2011, a decrease from 7.9 percent in 2006. It is essential that emergency humanitarian needs are adequately prioritized by the South Sudanese government, by donor governments and by international humanitarian NGOs.