An Interview with Judit Rius Sanjuan, US Manager of the MSF Access Campaign 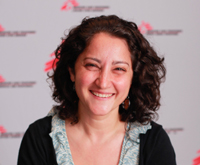 Judit Rius Sanjuan is U.S. manager of Doctors Without Borders/Médecins Sans Frontières (MSF)'s Access Campaign. In this interview, which originally appeared on the Results for Development Institute's Center for Global Health R&D Policy Assessment blog, she speaks with Soma Ghoshal.

1. Many of our readers may not be familiar with the history of this topic within the WHO. Can you describe the origin and objectives of the CEWG?

Many Member States, as well as civil society and experts, have long recognized that the current systems for health research and development (R&D) do not adequately address the needs of developing countries, and, as a result, they have supported a series of initiatives to investigate and find solutions to correct this imbalance, culminating in the creation of the WHO Consultative Expert Working Group on Research and Development: Financing and Coordination (CEWG) in 2010, whose report was just released.

The CEWG report begins with an important paragraph that sets the stage for their work quite clearly:

“The issue we were asked to investigate was identified at least two decades ago. Market mechanisms, and also publicly-funded research, collectively result in far too little investment in research and development on diseases that mainly affect developing countries. This means that poor people suffer and die because there are no effective health technologies like medicines, vaccines or diagnostics. Markets fail because intellectual property rights are not an effective incentive in these circumstances, and public investment is also dominated by the rich world and its own health needs. This is the challenge for the world as a whole, which has guided our discussions and deliberations. We have framed our recommendations to indicate that finding solutions is the responsibility of all of us in this interdependent world, in developed and developing countries alike.”

The experts considered a number of proposals for specific mechanisms to address R&D gaps for the developing world submitted by Member States, academics, industry, and civil society, including a joint submission by MSF, Health Action International Global, Initiative for Health and Equity in Society, Knowledge Ecology International, and Third World Network entitled “Consideration of an Essential Health and Biomedical R&D Treaty.”

The CEWG process was also informed by two previous and very important WHO documents: the 2006 report of the Commission on Intellectual Property Rights, Innovation, and Public Health (CIPIH Report), which concluded that the current innovation system has failed patients in developing countries, and the 2008 WHO Global Strategy and Plan of Action on Public Health, Innovation and Intellectual Property, which provided a roadmap on how to ensure innovation and access to medical technologies highly negotiated by WHO Member States.

While the CEWG’s report contains a series of recommendations, arguably the most striking recommendation is for WHO Member States to start negotiations on a new, binding, global R&D convention. The CEWG report argues that a binding convention “is needed to secure appropriate funding and coordination to promote R&D needed to address the diseases that disproportionately affect developing countries and which constitute a common global responsibility.”

2. In your opinion, what is the overall significance of the CEWG’s recommendations?

MSF considers the recommendation for a binding R&D treaty to be a landmark development in global health. The CEWG’s recommendations have the potential to boost R&D focused on the needs of patients living in developing countries, but also to change the way R&D is conducted to ensure that patients have affordable access to the fruits of innovations.

While efforts in recent years to address gaps in R&D have delivered some urgently needed innovations for resource-poor environments, these ad hoc efforts are not part of a sustainable system and are inadequate to meet the health needs in developing countries.

The CEWG’s comprehensive proposal takes us beyond the current piecemeal approach towards a more cohesive solution for priority-setting, funding and coordination based on global health needs. A binding convention could be a game changer in building a sustainable system to develop and deliver urgently needed vaccines, diagnostics, and drugs to patients in the developing world.

The report contains an excellent analysis of the failures of the current R&D system for the developing countries where we work. It also assesses a variety of proposed R&D financing, coordination and incentive mechanisms according to their potential public health impact, as well as their technical and financial feasibility.

The report further concludes that removing the link between the cost of R&D and the price of medicines should be a fundamental principle underpinning approaches to R&D for developing countries to ensure that resulting medical technologies will be affordable. In addition, the report specifies that an absolutely necessary condition for implementing these approaches will be a sustainable source of funding.

3. What are some of the implications of the recommendations for current R&D donors and other countries?

The recommendations could be transformative for R&D donors in several ways. The CEWG proposes the creation of new global norms for financing and coordinating priority medical R&D. It also aims to promote a more sustainable system for medical innovation to address the needs of patients in developing countries, based on the fair and equitable sharing of costs, access to benefits of R&D, and incentives to invest in needs-driven innovation.

Regarding overall funding of R&D by governments, the CEWG report’s principal conclusion is that all countries (developed and developing) should commit to spend at least 0.01% of GDP on government-funded R&D devoted to meeting the health needs of developing countries. In addition, the CEWG report proposes that countries should consider these targets:

The global convention could be useful for donors who currently make important contributions to global health R&D, especially in terms of prioritizing and coordinating efforts in relation to global health needs, but will also hopefully serve as a catalyst for countries that should be committing more.

Independently from the WHO discussion, I hope the report and its recommendations start a process of rethinking the way innovation is financed and coordinated at the national and regional levels. The result will hopefully be increased R&D financing and coordination for developing countries, and better models for biomedical innovation that promote both innovation and access.

4. MSF and others often use a term called “de-linkage” when they talk about the principles that they believe should govern the global innovation system. Could you explain the basic concept of de-linkage and give a few examples of how this principle could be successfully applied in practice?

One of the main problems with the current innovation model is that it relies on high prices, made possible with tools like patent-protected monopolies, to recover R&D costs. This model has at least two major flaws: a) high prices leave millions of patients without access to medicines that they cannot afford; b) a lack of incentives to drive innovation for patients (or governments that pay for their treatment) who cannot pay high-prices or create a profitable market. The system encourages profit-driven, rather than needs-driven, R&D, leaving many patient needs unaddressed.

Therefore, MSF advocates for an innovation system that de-links, or separates, the R&D cost from the sales price of products, therefore ensuring both innovation and access, and re-directing R&D efforts towards a more patients needs-driven approach.

Breaking the link between R&D costs and the sales price of products can be accomplished through a variety of incentive mechanisms, and should be seen as a standard for evaluating how well incentive mechanisms do against public health objectives. For example, the concept of de-linkage could serve as a way to assess incentive mechanisms currently being explored, including Innovation Inducement Prizes, Advance Market Commitments, the US FDA Priority Review Voucher, and the new USPTO Patents for Humanity pilot.

The WHO Member States have already recognized that separating the costs of R&D from the sales price of products is an important issue that should be further explored, and one of the main conclusions of the 2008 WHO Global Strategy and Plan of Action was a mandate “to explore, and, where appropriate, promote a range of incentive schemes for research and developing including addressing, where appropriate, the de-linkage of the costs of research and development and the price of health products, for example through the award of prizes, with the objective of addressing diseases which disproportionately affect developing countries.”

In its final report, the CEWG agrees that de-linkage is a powerful principle. It mentions some examples where de-linkage has been or could be applied, such as open innovation models where the R&D costs are covered by public or philanthropic sources and research results are made available in the public domain; licensing conditions imposed by funders or research organizations that permit non-exclusive licensing or prescribe a low target price for a product; or more comprehensive schemes that envision wholesale replacement of the intellectual property system by government-funded payments for R&D. MSF is especially interested in innovation inducement prizes as one way to separate the cost of innovation from the final price of products. During the negotiation of the WHO Global Strategy, the governments of Barbados, Bolivia, Suriname, and Bangladesh presented several proposals for prizes to reward innovation, including two proposals that MSF has followed with particular interest, given the diseases that we currently treat: a Chagas disease prize fund for the development of new treatments, diagnostics and vaccines; and a prize fund for development of low-cost rapid diagnostic test for tuberculosis.

In May 2012, the 65th World Health Assembly will deliberate over the findings and recommendations of the CEWG. The key to translating the CEWG recommendations into action will, of course, be political will and leadership by the WHO and its Member States. MSF hopes that governments will seize this opportunity and commit to starting the process of establishing a binding convention on research and development relevant to the health needs of developing countries.