MSF teams that have been working among 75,000 Malian refugees at the Mbéra camp in Mauritania since February 2012 are now scaling up their medical activities. 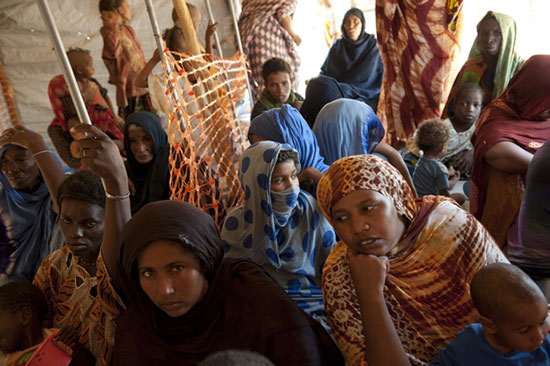 Doctors Without Borders/Médecins Sans Frontières (MSF) teams that have been working among 75,000 Malian refugees at the Mbéra camp in Mauritania since February 2012 are now scaling up their medical activities. Although the emergency phase of the response is coming to an end, significant needs remain. Dr. Louis Kakudji Mutokhe, an MSF doctor in Mauritania, provides an update on the situation.

Has the nutritional situation improved since the last influx of refugees in January?

In January, the situation quickly deteriorated with a new influx of refugees fleeing the resumption of fighting in Mali. Since then, despite the mobilization of the various organizations in the camp, the nutritional situation has remained a concern, with malnutrition rates above the emergency threshold. Each month, MSF’s nutritional centers record an average of 330 severely malnourished children. Each day, that means 12 children at risk of dying that must be looked after. Fortunately, 85 percent of them emerge from our program healthy.

What measures have been taken by MSF to improve the medical situation?

We have built a third health post in the camp’s extension zone to improve access to care and health coverage. As a result, we are receiving more than 1,800 patients a week. The increased options for treatment, the strengthening of the capabilities of the medical staff, and the greater mobilization of health promoters have enabled us to improve our effectiveness. Children arrive sooner at the hospital and are better able to adhere to ongoing treatment.

In cooperation with the Ministry of Health and UNICEF we have also put in place vaccination teams in the health facilities to strengthen routine vaccination activities (EPI): diphtheria, poliomyelitis, tetanus, measles, and whooping cough. These diseases are easy to prevent, and vaccination is one of the best ways to protect children. In terms of the fight against malaria, we expect an increase in patients with the arrival of the rainy season. Some 45,000 insecticide-treated mosquito nets will be distributed in the camp, with priority given to children under 5 and pregnant women.

Can it be said that the situation is under control?

Many efforts have been made in recent months. They must be intensified in order to maintain an acceptable level of assistance. But the situation remains worrisome, of course.

It is unlikely that the refugees will return to Mali in the near term. Although a few families have returned, the tensions that exist in the north of the country still do not create conditions favorable to a voluntary return of refugees. The last families who arrived a few weeks ago in this zone are frightened. They refuse to go to the camp and prefer to stay in Fassala, a town on the border with Mali. Similarly, a large number of refugees who arrived during 2012 are still afraid to return to Mali for fear of suffering reprisals.

As for the living conditions in the camp, they are very precarious. Food remains unreliable, even though food distribution has improved considerably. Once a month, children between the ages of 6 and 24 months now receive food rations containing CSB ++ (a fortified mixture consisting of milk, oil, and sugar). This is essential to their growth and helps prevent malnutrition. But, considering the families’ lack of resources, these rations are sometimes shared with older children. So MSF gives nutritional biscuits to households where one of the children suffers from malnutrition. It is difficult therefore to be fully optimistic because some structural causes of malnutrition remain.

What other problems do you encounter on the ground?

With the rainy season, the roads are muddy and it is sometimes difficult to reach the Mbéra camp. We try to anticipate as best we can: reinforcing the medical buildings to withstand water and sandstorms; preparing for the peak of malaria; fighting diarrhea and respiratory infections, which remain the primary causes of mortality; mobilizing to improve access to water and sanitary conditions; encouraging early resort to health services, et cetera.

Another problem is the shortages of medical staff. MSF is currently having some trouble recruiting qualified medical personnel who are prepared to work in the Mbéra camp, in the middle of the desert. Yet this is a prerequisite for improving the medical and nutritional situation of the refugees.