Patient Story From Zimbabwe: "I thought I was going to die" 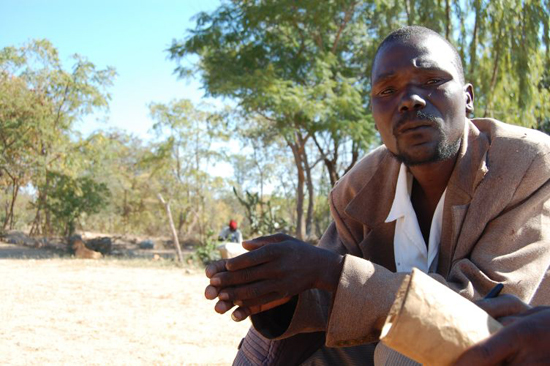 In Murwira Clinic, southeastern Zimbabwe, Dennis Taronga is receiving antiretroviral (ARV) therapy with the help of Doctors Without Borders/Médecins Sans Frontières (MSF). Taronga, a husband and father of three who used to work as a builder, contracted cholera in January 2009 in the historic cholera outbreak that infected nearly 100,000 people and left thousands dead. This is his story.

Last January, I began feeling really sick. I had general body weakness and could not move. I was so badly ill I thought I would die for sure. I had diarrhea; I felt very cold and was very dehydrated. I wasn’t working at the time—my family had to look after me.

My cousin brought me in a cart to the MSF clinic in Murwira, where I also receive treatment for HIV. For three days I could not eat or drink. I only had an IV drip. But after four days I started to feel good—I was so happy, able to move and go back to my family.

Many others in my village were sick too. My uncle was very sick with cholera and died on the way to the hospital. I was very upset because none of us could go to his burial.

I thought I was going to die. There was nowhere else I could go. I don’t know how others escaped cholera. Now I know the illness is caused by dirty water. Now I know how not to get sick when the rainy season comes back—I will use the aqua tabs from the MSF clinic here and then I won’t get sick again.

I come to the clinic now for my ARVs. Last year we brought my child to the hospital in Murambinda where she died of AIDS at just one year and six months old. I was tested and they said I was positive and so is my wife. Now we both come to the clinic here in Murwira for our ARVs.

If the clinic was not here, definitely people would get AIDS. It’s too expensive and too far away to get treatment anywhere else.

I would really like for MSF to keep on supporting us and keep us on ARVs. I feel better now but I cannot find work and there is not enough food. I hope that I can get work—carpentry, anything that can give us a good life. We are no longer getting a life. The job situation is not improving as the country is a desert. There is no money to pay here. We are just sitting while not having anything. I just want to work for my family to get better.