Patient's Story: "They told me I am brave because I spoke while many didn't"

Esther, 17, was raped at 8 o'clock in the morning at a public bus stop in Guatemala City. Two months later she is struggling to find a way back to normalcy.

"The first night was very difficult. I had dreams about what happened to me. I cried a lot. I couldn’t sleep for a few nights. I was scared to have dreams about it, and it might come back. I see in my dreams the moment when he pushed me against the wall and lifted my skirt. . . I had the image of his face in my mind. I will never forget that. He was fat, dark with long hair, with a moustache." 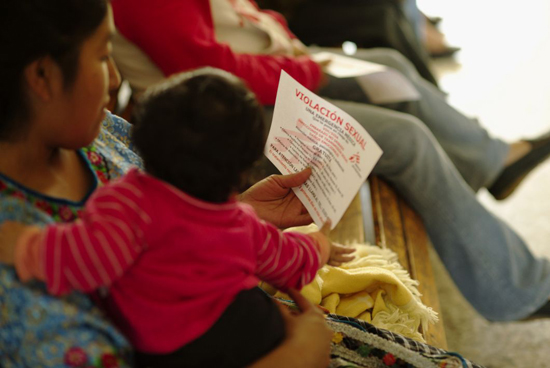 A girl walks home through Zona 7, one of the most violent areas of Guatemala City, where an MSF clinic for victims of sexual violence is located.

Sexual violence affects thousands of people every year in Guatemala. However, there has been little assistance provided to survivors of sexual violence by the national health care system. Since 2007, Doctors Without Borders/Médecins Sans Frontières (MSF) has operated a clinic in Guatemala City specifically to treat these patients.

One of these survivors is Esther, a young woman with a beautiful laugh and a strong focus on her studies. At the moment, this is all she has. She says she doesn’t enjoy going to dances or movies anymore. But at least she’s not alone. She is receiving support that will help her get back a little bit of normalcy. This is her story:

The first night was very difficult. I had dreams about what happened to me. I cried a lot. I couldn’t sleep for a few nights. I was scared to have dreams about it, and it might come back. I see in my dreams the moment when he pushed me against the wall and lifted my skirt. . . I had the image of his face in my mind. I will never forget that. He was fat, dark with long hair, with a moustache.

It was March 23 this year. I had my last exams. I woke up late, so I left really quickly. There are two roads to my school. One goes through Zona 1 and one through the bus terminal—that’s the quicker one. I didn’t even have breakfast. I ran out of the house with my backpack. I walked to the bus stop and there was a guy who pushed me to a wall. He took all my stuff to look for money. I thought this would be the only thing he did—but, no. It was daylight, 8 o’clock in the morning, and he raped me. It was very difficult for me to accept this. I was a virgin.

In Guatemala, there are a lot of people who don’t help you. There were many people around and they just laughed. They don’t help because they are scared. I don’t know if the guy had a gun. I had a lot of marks from him all over my body and between my legs. I had his fingerprints on my body. He shut my mouth and I bit him. I couldn’t scream. Then he just left me on the ground. A lady helped me. She told me to go home. But I had to go finish my exams. I was really frightened about my exams. I went to school. My teachers and friends were around. I couldn’t even talk. I really wanted to finish my exams. They told me not to worry about this. So I calmed down a little bit.

The headmaster asked me if I wanted to go to the bus terminal to look for my attacker. My parents came. I went to my father and he was very nice to me. We went directly to the ministry of justice and filed a legal report. I felt very dirty.

After this happened to me, I didn’t go to school for the first week. I didn’t want to do anything. I just wanted to stay closed up in my house; I shut myself off so nobody could hurt me.

Then I went to see MSF for the medical and psychological treatment. Now it is much easier to talk about it because it is already two months. But even one week ago, I would have cried or not spoken. I met Wendy, the psychologist from MSF. I also met the doctor who gave me medication against Hepatitis B. They examined me for syphilis and HIV, something I would have never imagined I would go through. Thanks to god they were all negative. But I still have to be under observation for the rest of the year. I have to take antiretrovirals and pills against nausea. It has been quite a bomb for my stomach.
I am happy that I am not pregnant. I would have kept it, but it would have been difficult because it would have had the face of the one who raped me.

I spoke while many didn’t

They told me to talk about it; it’s not good to keep it inside. They told me I am brave because I spoke while many didn’t. So I talked. I have been seeing MSF for two months now. When I had my second breakdown, I thought about killing myself. I didn’t have the will to live. I didn’t have a logical explanation of why this happened to me. The psychologist said there is never a why. We are not selected, those who are raped. There is only one way to go on. I still have so many dreams and goals which I won’t give up just because what happened to me.

My life became very hard. When I went back to my studies, I had difficulties since some teachers didn’t believe me. They said I am not in school because I don’t want to be.
I found out that the same thing happened to my mother. What was different was that my grandmother didn’t help her. She told her to wash herself and it will be OK. My grandmother still has doubts if it had really happened. My mother told me so I would know I wasn’t the only one. For her it was difficult, too. I never knew this happened. I have become much closer with my family.

The psychologist said that it’s up to me whether I tell my boyfriend one day. I don’t want to run around with a flag saying I was raped. But I want to tell the people who I am close with. Guatemalan men are quite macho; if you are not a virgin, you are promiscuous. My mom told me, “yes, you are still a virgin in front of the eyes of god.” My concept of virginity has changed a lot. I always imagined it would happen with someone I love—the love of my life, in the house on the beach, with candles and flowers.

Since then, I have a completely different perspective. I don’t think of everything so romantic, pink and nice. It is just not like that. I think I have grown up a lot. For my age, I am quite grown up. It is difficult to think of a 17-year-old girl like me speaking like this. All these things made me grow up.