?Practically Impossible to Get Emergency Obstetric Care in Syria"

A recently returned MSF midwife discusses the process of providing maternal and obstetric care in war-ravaged Syria, along with some of the more memorable women she met while in the country. 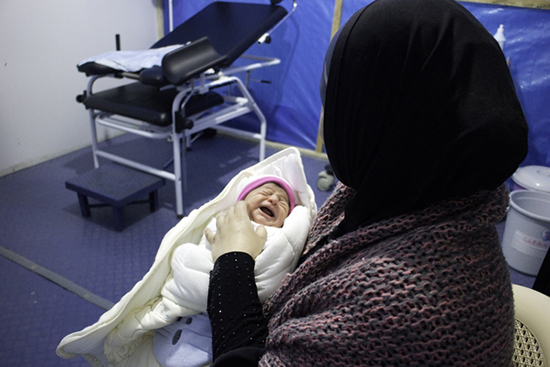 A mother and baby in the maternity department of one of MSF's makeshift hospitals in Syria.

Margie is a midwife who recently spent seven weeks working in a Doctors Without Borders/ Médecins Sans Frontières (MSF) hospital in northern Syria. The hospital includes an operating theater where staff members treat war wounds and large burn injuries, an emergency department, and the maternity unit where Margie was working.

Why did MSF establish a maternity unit at this hospital?

We set up the maternity unit because women are unable to access adequate health care in this area. For women facing pregnancy complications, it’s practically impossible to get emergency obstetric care. There are still some midwives in the community providing support for normal deliveries, but if complications arise then it becomes problematic to find somewhere to refer.

Some health facilities have been destroyed in the conflict, while those that remain are not functioning adequately. There are some private hospitals but they are beyond the means of many people. There used to be a network of midwives providing antenatal care, but now it seems that many pregnant women don’t get antenatal care at all.

The conflict has also reduced women’s access to good food and many are displaced. All this creates stress that can itself impact on their pregnancy.

What sort of services is the maternity unit providing?

We provide safe delivery services, including emergency obstetric care, and [we] refer patients needing caesareans to the surgical team. Many of the women have had a lot of children, sometimes 10 or 11. And many have previously delivered by caesarean section, which gives you an idea of the standard of health care that was available before the conflict.

The maternity unit also provides antenatal care, including prophylactic treatment during pregnancy—for anemia, for instance—and immediate and follow-up postnatal care. But it’s not just obstetrics that we’re doing: we also offer gynecological services, which are quite difficult for women to access in Syria.

The conflict has reduced the kinds of healthcare available, and because it’s an Islamic context, if some women can’t find a female health care worker, they may not seek care at all.

Probably about half the patients we saw came from surrounding villages. Women would often come in with someone who had previously been to our maternity unit – many had heard of us through word of mouth.

Did you work with local Syrian staff?

Yes, I was working with a wonderful team of four Syrian midwives.

Each week, we delivered up to 12 babies and held around 50 to 60 consultations. My colleagues managed the normal deliveries, but if complications arose then I supported them and worked with them on the medical care required.

They all had varying levels of training and experience, so I was also training and updating the skills of the Syrian midwives. They were very appreciative of the opportunity to learn additional skills because another consequence of the conflict was that for some, their training was interrupted.

Due to the shortage of qualified staff, one of the midwives we recruited had completed her nursing training, but was only part way through her maternity training. She was like a sponge soaking up knowledge: anything I told her she would put into practice. It was inspiring to see that sort of dedication.

Were there any particularly challenging cases?

We assisted with a lot of normal births, but there were some difficult cases.

One example was a woman who had delivered four healthy babies but had then lost a baby at full term. Like many women we saw, she had been displaced by the conflict and was living with her whole family in one room in a school. When she came in, she was pregnant and suffering from severe preeclampsia, which indicates very high blood pressure. She had obviously had the condition for some time, because her baby was poorly grown.

In fact her baby died as we tried to save her life. She was an example of someone who could not access the care that she needed during pregnancy and for whom the outcome was a tragic one.

Because her life was potentially at risk, the life of her baby came second to hers—a very difficult dilemma to come to terms with. But what stuck with me was her resilience, how she grieved but was still so grateful for the care and support that she was given. That was very striking.

Another woman who made a strong impact on me was a woman who came in for antenatal care. When I asked about her previous deliveries, she mentioned that she had seven children, but four of them had recently died in a bomb blast in the nearest town. But we were able to help her deliver a healthy baby. To see her holding her new baby after everything she’d been through was a really rewarding experience.

MSF is running six hospitals in northern Syria. From June 2012 to August 2013, MSF teams have carried out more than 66,900 medical consultations and 3,400 surgical procedures and have attended 1,420 deliveries. MSF teams have also provided more than 200,000 consultations for Syrian refugees in neighbouring countries.