Running After People Running for Their Lives: A Year of MSF's Response to Violence and Displacement in Wau, South Sudan

View Photo MSF
An MSF mobile clinic on the Protection of Civilians site near the UN base in Wau, South Sudan.
MSF
Click to hide Text

Julie Reversé was the Doctors Without Borders/Médecins Sans Frontières (MSF) deputy head of mission for South Sudan in 2016 and 2017. Here she describes the situation in Wau, and the challenges of providing medical to the backdrop of ongoing violence.

Wau is the third largest town in South Sudan and it's a commercial crossroads. I first went there with an MSF assessment team in May 2016 as the security situation deteriorated. The town itself was very lively, but the situation in the countryside was very different, with villages burned and health facilities looted.

People were very afraid. Ours was the first vehicle they'd seen on the road that did not belong to combatants. Many people had left their villages and were hiding in the bush.

We started running mobile clinics in different places every day. We were trying to gain people's confidence and understand where they were. This was for the first six weeks we were there.

Then on June 24 and 25, there was a major clash in Wau, and many people fled for their lives. At first our team found several hundred people seeking safety near the UN base, gathered under a tree. Then thousands more arrived in the following days, creating a crowded camp. These so-called "Protection of Civilians" (PoC) sites have formed around UN bases on numerous occasions during the current conflict in South Sudan.

Our team opened a clinic on the site. The patients were much sicker than we expected because of the violence and instability that had been growing for months. We saw victims of gunshot wounds and women who had been raped, people with mental trauma and some who had fled from a hospital in Wau town. After several days, we handed the clinic over to another aid organization so we could focus on people who had fled elsewhere, and that other aid organizations had not reached yet.

In Wau town, there were bodies in the streets and the tensions were high. We started doing mobile clinics for smaller groups of people who were gathering in churches, schools or what they thought were safe areas in their neighborhoods. They were old people, women and children who had not been able to flee as far as the others. They had had no food distributions, shelter supplies, mosquito nets or medical services for the first two or three weeks. We participated in a measles vaccination campaign for children across the city, and we opened a pediatric hospital near the protection of civilians site.

Meanwhile a huge number of people fled to the south and southwest of Wau, to a rural area called Baggari, which was controlled by the opposition. We had worked there before, but now it was a hectic humanitarian response, as many aid organizations tried to distribute food and supplies, provide water and sanitation, carry out vaccinations, etc. Most of the other organizations traveled in mixed convoys with the UN, but there were tensions between the UN and the South Sudanese soldiers who controlled the checkpoints, and the convoys stopped after several weeks.

Our team kept trying to go into this area. There were a couple of young soldiers at a checkpoint who would let us pass or refuse to let us pass. For a while, we could cross one day and not the next. We had documents signed by the civil and military authorities, but still we were not allowed to pass the checkpoint on many days.

Displaced people were gathering near the schools or health centers in the main villages of Baggari. There were big groups sheltering under plastic sheeting with a few basic things, such as blankets and water cans. We planned to start a bush hospital in a place called Brinji, where a lot of people had gathered, so we could treat severe malaria during the annual peak in cases. We were already running a big clinic there, with about 20 local staff. But the day before we were going to set up the hospital, there was a clash in Brinji, and everyone—several thousand people—fled the area. A few weeks later, we decided to start a bush hospital in another location, called Ngohalima, but again there was a clash there and people fled.

So, it was the same story: I saw the same people running from one place to another multiple times. We tried to move with the population and do mobile clinics. Later, we reinforced four clinics that we were supporting in the Baggari area so they could have beds to stabilize patients and treat severe malaria. We decided it was a better approach, because if we started a bush hospital, it would attract more people and could make them a target for attack. 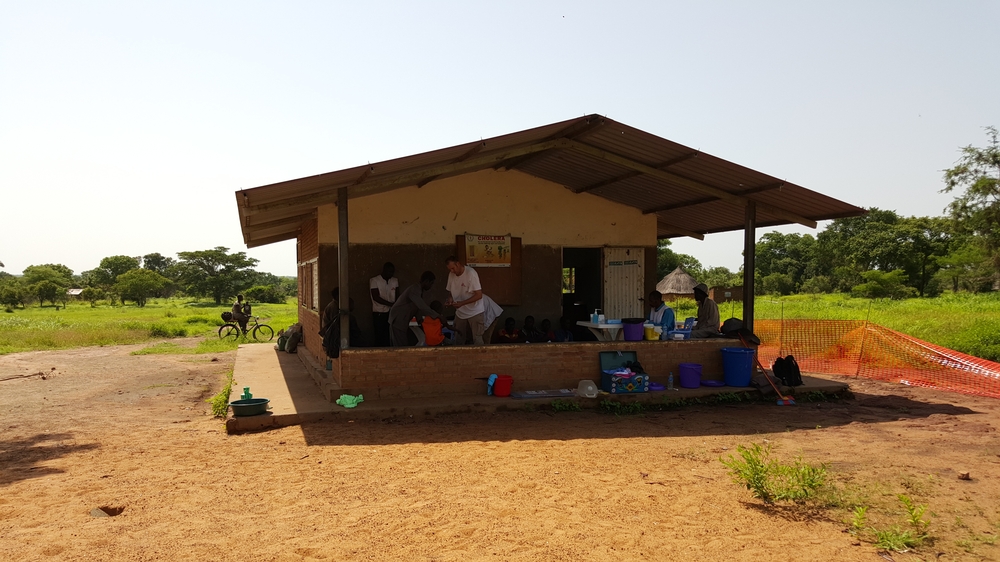 Another reason we didn't open a hospital is that we never knew if we would be able to cross into the area to supply the facility, supervise the staff and refer patients elsewhere if needed. The problems at the checkpoints continued. For five whole weeks we were not allowed to pass. It was never clear why.

Eventually the situation in Baggari calmed down a little. The conflict was kind of on standby, and people began to settle down and start farming, and their ability to travel into Wau town improved. Other aid organizations were able to travel there in January to do their own assessments of the needs.

We said that when other organizations had sustainable access to Baggari to provide medical services, we would pull out. Our last visit was on April 5. More recently, however, there have been new clashes around Wau, and it remains a tense area, where violence can escalate quickly.

No End in Sight

We left the PoC site, as there were two other clinics there that could cover the basic needs. The situation in Wau remains a protection issue, with civilians trapped in the PoC site and afraid to go home, even to houses a few kilometers away. We see the need to protect these people but the need for medical care on site is largely covered.

A major question is whether the population in rural areas will have access to medical care. Just before we left, there were significant clashes in Baggari area and the front lines moved. It is not clear if the medical services can be maintained in the local clinics with the donation of medical supplies that we did. We hope that the medical services will be supported by another organization, and we will continue to monitor the situation from Aweil, where we have a hospital.

What I saw around Wau is unfortunately what MSF has seen over many years in what is now South Sudan: people running from violence and MSF running after them, trying to provide medical care.

Read More: Displaced in South Sudan: "I Left Running—There Was No Time to Take Anything"