Somalia: "The Child is Completely Different Than [the] Day He Was Admitted" 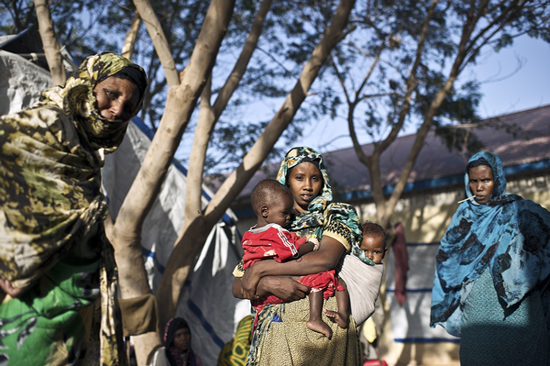 Mothers and children wait to receive medication and supplementary food at the therapeutic feeding center in Galcayo South, one of many centers MSF runs in Somalia to help children like Khalif.

Four-year-old Khalif has been under treatment in Doctors Without Borders’s/Médecins Sans Frontières’s (MSF’s) inpatient therapeutic feeding center in the southern Somali town of Kismayo for just over two weeks when his mother, Abshiro Gedi, tells his remarkable story.

The family lives in Mayondo village, about 37 miles (60 kilometers) north of Kismayo, in an area that has been heavily affected by the ongoing crisis in Somalia. Two of Khalif’s brothers recently died from complications related to measles, and Khalif and his sister were also suffering from the disease. When one of Abshiro’s brothers, who lives in Kismayo, heard the bad news about his nephews’ deaths and illness, he hurried to Mayando to bring the two remaining sick kids to MSF’s therapeutic feeding center for malnourished children in Kismayo.

Once there, Khalif was admitted as he had signs of severe malnutrition. “Today the child is completely different than [the] day he was admitted,” explained Abdirasak Sheikh Abdiwahab, MSF project coordinator assistant in Kismayo’s center for malnourished children. “Cases like this who improve quickly are many, not only Khalif, but this is a [good example of the conditions people face here].”

With the ongoing humanitarian crisis in Somalia hitting the southern regions hardest, MSF opened a therapeutic feeding center for children under the age of five in the city of Kismayo, aiming to curb child malnutrition and mortality in the city and its surroundings. Children this age are most at risk of dying from malnutrition. Since opening this center in November 2011, MSF has treated over 300 children, with an average of 50 receiving treatment at any time.

MSF has worked continuously in Somalia since 1991 and currently provides free medical care in eight regions in the country. Over 1,400 Somali staff, supported by approximately 100 staff in nearby Nairobi, Kenya, supply water and relief items and provide free primary health care, surgery, treatment for malnutrition, in nine locations in south and central Somalia. MSF is also providing medical care to Somali refugees in Kenya and Ethiopia.