Somalia: "I did not choose this career at the beginning" 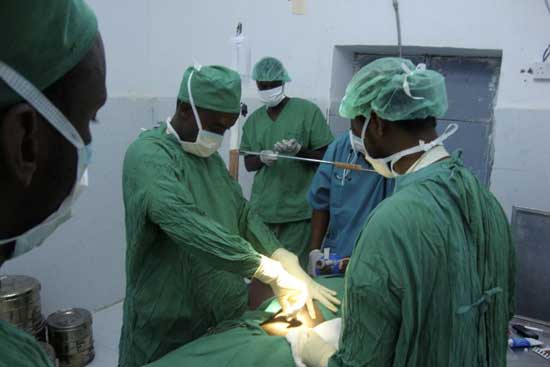 In the central Somali city of Galkayo, Dr. Abdullahi Adan Mohamoud is working for Doctors Without Borders/Médecins Sans Frontières (MSF) to provide health care to a vulnerable population trapped in a conflict-ridden and divided city. In this interview, he discusses the medical needs in Galkayo and his experience working as a surgeon in Somalia.

Why is MSF’s surgical facility in South Galkayo Hospital so important?
The MSF surgical facility in Galkayo is very important because it is the only free surgical facility in a region affected by frequent violent clashes. It caters for many people, in towns and villages as far away as Dhusa Mareeb (150 miles). The people in this region are too poor to afford private surgery, which costs a fortune. Furthermore, there are very few surgeons working in Somalia as a whole. The majority are concentrated in Mogadishu, which is far away from Galkayo (about 450 miles).

What kinds of surgeries do you perform?
We perform all types of surgery, however, war-wounded patients make up roughly half of the patients we operate on. This is sporadic and very unpredictable, like the clashes. We also carry out pathological surgeries for things like intestinal obstructions, appendicitis, ulcers and C-sections in the maternity unit—assisting with the safe delivery of babies when there is a difficulty.

How long has MSF been providing surgery in Galkayo?
The MSF surgical facility in Galkayo has been operating for five years. I took up my position here four months ago. Before I arrived, MSF had been forced to stop surgical activities for around 10 months due to lack of human resources. It is very good that we can now offer the service again.

Can you tell us about any recent incidents that illustrate your work?
In late October and early November, Galkayo experienced a number of heavy clashes, including an explosion. As a result, the hospital received around 45 injured people, in this instance, predominantly men.

The explosion took place after midnight and the hospital was flooded with wounded. Unfortunately, there were two patients with very heavy injuries who died at the triage before even reaching the operational theatre.

People had all kinds of injuries, ranging from minor injuries to major abdominal and vascular injuries. The easier cases needed medical treatment and the major cases needed surgical intervention. We managed to save every single patient we treated and now all of them are conscious and some are even discharged.

One case in particular stands out, as the man was very confused. He had come from the north of Galkayo, which is a difficult journey due to the division of the city. He had multiple injuries and needed surgical treatment. However, his condition made it difficult to get the necessary consent. Thankfully, we could eventually treat the man, thanks to support from the elders. He is now much better.

How did you get into surgery?
Actually, I did not choose this career at the beginning. I was thinking of fleeing the country as the violence was becoming intolerable. However, my brother encouraged me to go to university and study. I took his advice and studied hard at Benadir University in Mogadishu. In 2008, I graduated, among the first group of doctors to graduate in Somalia since the fall of Siad Barre. After graduation I went to Medina hospital to gain specialist training in surgery, facilitated by MSF.

How do you feel about your job?
I enjoy doing this job. It is the best thing that ever happened to me. The part I enjoy the most is seeing my patients coming back to the hospital after treatment and thanking me and encouraging me. This gives me feeling of accomplishment and fulfillment.