Somalia: "I realize I am one of the lucky ones" 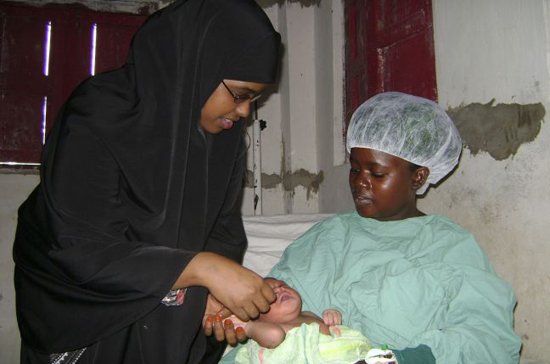 Dr. Hafsa Abdurrahman Mohamed is one of only 20 students to have graduated from medical school in Somalia in the past two decades.

In December 2008, 20 Somali students overcame huge odds and graduated from medical school in Mogadishu—the first batch to do so for almost two decades in the failed Horn of Africa state. Dr. Hafsa Abdurrahman Mohamed, 26, was one of those receiving a diploma from the capital’s Benadir University. Upon completing her studies, she decided to work for the Doctors Without Borders/Médecins Sans Frontières (MSF), using her skills to help provide free medical care in Somalia. In this interview, she describes some of her experiences growing up in Mogadishu and working as a female surgeon in Somalia:

When I was very young, there was peace in Somalia but I don’t remember it. Throughout my childhood fighting, looting, destruction and killing were commonplace in Mogadishu.

When I was very young, there was peace in Somalia but I don’t remember it. Throughout my childhood fighting, looting, destruction and killing were commonplace in Mogadishu. I was caught in crossfire many times when I was going to school. I saw people dying and others seriously wounded. University was especially challenging for me. I had the fear of death every morning and prayed to Allah every day that I would come home safely. In addition to the fighting there were other problems, many parts of the city had no electricity so studying at night or doing practical training in hospitals was very difficult.

Despite all the challenges, I realize that I am one of the lucky ones. My mother went to live in the UK before I started university and she paid for my education. Many others don’t have that opportunity. There are so many very bright students in Somalia who don’t get the chance to achieve their dreams. I hope this will change. Education does not have an age limit. As the English proverb goes: ‘You’re never too old to learn’.

I chose to become surgeon because I wanted to help Somali women, particularly mothers who don’t get good medical care, especially when they have difficult births and need surgery.

I graduated at the end of last year. I chose to become surgeon because I wanted to help Somali women, particularly mothers who don’t get good medical care, especially when they have difficult births and need surgery. There is a huge need for female surgeons in Somalia as many Somali women don’t want male surgeons doing their operations.

After graduating I did six months further training in Mogadishu and then I came to work in Marere at the beginning of August. There was no hospital in Marere until MSF started working here in 2003. There used to be an expatriate surgeon but due to specific risks faced by international staff, MSF has been forced to run its programs in Somalia without their input since early 2008. In Marere, this meant they had to suspend surgical activities as they couldn’t find a qualified Somali surgeon.

Before I started working in Marere, MSF would refer women needing emergency obstetric surgery to Kismayo. The journey would take five hours in the dry season and MSF would cover the costs. Now that I’m here, we can do surgery again. On August 31, I performed my first caesarean section. I had done many caesarean sections as a student, but this was my first one as a practicing surgeon.

The girl I operated on was only 18 years old. She’s partially disabled in her right leg and lives with her parents in Jilib, a town about 11 miles north of Marere. Her husband is in Kenya right now. As her pelvis is very narrow she was not able to deliver properly. She was in labor for 24 hours before her parents brought her to the hospital. Without surgery her uterus could have ruptured, killing both her and the baby. Fortunately, her parents brought her here in time. The surgery was quite straightforward, we managed to deliver the baby in less than an hour. Both mother and daughter are doing well. In fact, the baby has been named Hafsa in my honor.

MSF has worked in Marere since 2003. In Marere hospital, MSF staff provides outpatient services for adults and children and inpatient care for children, medical and maternity cases. Medical staff provides delivery services, including emergency obstetric care, therapeutic and supplementary feeding, surgery (mainly obstetric), outpatient curative and preventative services and tuberculosis treatment. In nearby Jilib MSF runs a feeding programme but was forced to suspend these activities in August 2009 due to insecurity. In the first six months of 2009, MSF teams in Marere provided 18,104 outpatient consultations and admitted 536 patients to hospital. 2,453 children were treated for malnutrition and 3,373 received vaccinations.