Somalia: No Time to Waste in Mogadishu

MSF staff recently returned from Mogadishu discuss what they saw there and the issues the humanitarian response to the ongoing crisis must address. 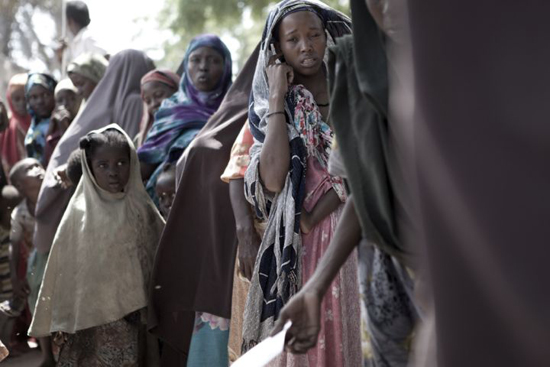 Somali women and children at a measles vaccination campaign run by MSF in Mogadishu last week.

Doctors Without Borders/Médecins San Frontières (MSF) Emergency Coordinator David Michalski and Field Coordinator Said Hassan recently left Mogadishu after launching new MSF activities there in response to the ongoing nutrition crisis and the flood of internally displaced people (IDPs) and refugees it has set in motion. In this interview, they describe the humanitarian situation and the initial steps MSF has taken in the Somali capital.

Michalski is customarily based in Dubai and serves as MSF’s coordinator of operations for Ethiopia, Somalia, Bahrain, and Somaliland. Hassan is a Kenyan-Somali who started working with MSF in 2006 and is now back in Egypt, where he is supporting the mission with emergency preparedness.

David Michalski: I arrived in Mogadishu with two colleagues on 31 July and immediately we began to look at the situation in the IDP camps. They are everywhere in Mogadishu, some with just a few families and some with hundreds of families. Most of the vacant land in Mogadishu has been taken over by these densely-crowded camps.

Said Hassan:  Just walking down one of the streets you can find 30 or 40 crowded camps. They usually have small huts they set up, and there isn’t even space to walk between the shelters. Some camps have latrines, but the majority don’t. During our visit to the camps, we were told that a lot of people are outside begging because they don’t have enough food to eat or anything to sleep on or in. In the camps you always see some people who are so sick they are just lying on the ground.

People are flocking to Mogadishu because of the drought, because their animals have died and they have nothing to live on. For many of them, the food that international agencies are sending to Somalia has not been reaching them, because they live in areas where the aid hasn’t gotten through.

Michalski: We immediately saw three main priorities for MSF. We found a large number of people with measles, so we commenced a treatment and prevention program along with the distribution of relief items like plastic sheeting and soap. There are a lot of people—mainly very sick children—who are malnourished, so we’ve opened a feeding center and a stabilization center where the most malnourished are being given around the clock nursing supervision.

Hassan: Talking to people in the camps, we didn’t even have to ask them what they needed. The first thing everybody said to us was that they needed food, shelter, and medical care. There are quite a few hospitals in Mogadishu, but they’re not free. All old government hospitals cost money, but most of the people in the camps have little or no money. One woman I met had been sick for 14 days but told me she couldn’t go to the hospital because she didn’t have any money.

Michalski: As soon as we saw what the situation was like, we were able to get supplies in. We brought in material from our base in Nairobi, and our supply center in Brussels also flew in two full airplanes of supplies. Nevertheless, it is difficult to have a global overview of the situation in Mogadishu due to security constraints that restrict movement.

Looking forward, I think MSF is going to be faced with some major challenges here. The situation is quite bad and for the foreseeable future it probably won’t get better. The harvest has failed and the outlook for the coming months is bleak. The scale of needs and the fact that the situation will likely worsen is very worrying, as is the security situation, which is extremely volatile and is hampering the delivering of aid, just as it has for the past 20 years. We need to keep working to ensure we are getting help to the population.

Hassan: This is an emergency situation and we need to move very fast. There is no time to waste.