Duncan McLean, MSF program manager for Somalia, talks about the difficulties of working in Somalia today. 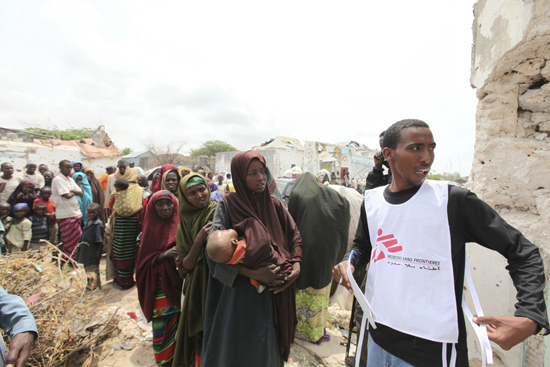 Somalia has been in a state of war for 20 years. Today, the forces of the Transitional Federal Government, supported by the African Union Mission for Somalia (AMISOM), are fighting with the Al Shabaab armed group in Mogadishu and other parts of the country. Safe access for international NGOs remains difficult, impeding aid operations. Two Doctors Without Borders/Médecins Sans Frontières (MSF) projects recently had to suspend activities, but MSF was just able to reopen one of them to respond to the current emergency. In all, MSF currently has a dozen across Somalia and is working hard to extend its medical operations even further, despite continuing obstacles.

What do we know today about the situation in Somalia?

State services aren’t functioning, and the data we have are too fragmentary to let us make any precise diagnosis about the condition of the population. Security problems and lack of access inhibit data collection. Although there are no doubts that the situation is critical, we still have a very patchy view, limited to the areas of our activities.

In Somalia as in other conflict zones, intentions are not enough: there are many obstacles to assistance. An NGO such as MSF will not be able to act without negotiating with all local actors. The ability to access and provide assistance to populations depends on them. The interests of the people are only one criterion among many, however, and not always a priority for those involved in the conflict. If they were, Somalis wouldn’t be leaving the country in such numbers. In Ethiopia, for example, in an equally drought-affected region such as Oromia, people don’t go so far as to cross the border. In Somalia, there is a human crisis that cannot therefore be the result of arid land alone.

And yet everyone is talking about a drought-related famine…

Besides the alarms that were raised last year by several organizations, it’s not easy to obtain any concrete evidence of what is being called a famine. At the end of last year, drought had affected access to water and to wells. We noted an increase in the number of people coming to some of our projects looking for help. In the two projects we suspended in June, Daynile and Jamame in Somalia, the indicators were, paradoxically, less suggestive. We weren’t told about the death of livestock, for example. The signs of a major crisis were first seen at the Ethiopian and Kenyan borders, where thousands of Somalis started to leave the south of the country in June this year.

Why were activities suspended just before this crisis?

Surgery was perceived as synonymous with “war wounded," with activities linked to the war, and as controlled by those who waged it. The suspension aimed to clarify these issues with our local contacts before things became any worse, and [to] guarantee as much as possible the preservation of a neutral and independent space for assistance. We only succeeded in part: international staff are still unable to access our projects. We decided to resume activities anyway at the end of July, in light of the serious deterioration of the situation in the country.

Where do things stand now?

The project in the hospital at Daynile is open again and now includes a nutritional center. Our activities in Jamame in the south should also restart quickly. We are in negotiations to introduce new activities to the area around Mogadishu to assist the recently displaced people. In the camps that our teams have been able to visit, they found people very weak, cases of malnutrition. Above all they noted a large number of deaths caused by severe acute diarrhea.

We are planning consultations with hospitalization on-site, activities linked to malnutrition (which could include general food distribution), measles vaccination. Our first concern is still improving access to safe drinking water, as the sheer lack of proper water and sanitation services create conditions for the spread of diarrheal diseases, which might put malnourished children at greater risk of death.