Somalia: "What I saw when I was in Afgooye was a desperate humanitarian situation."

Dr. Gustavo Fernandez, head of mission of MSF in Somalia

People have been fleeing Mogadishu since the start of the clashes, but the last month has seen a real increase of people arriving in the Hiraan, Galgadud and Bay regions and also in Afgooye. We think that there are about 10 to 12,000 families who have fled to Afgooye from Mogadishu, with an average of 6 people per family. They're mostly women and children, there are very few men. 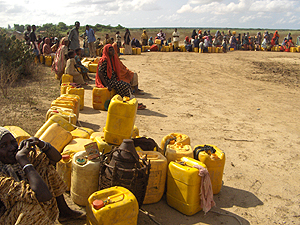 In Afgooye, Somalia, displaced people who have fled the continuing violence in Mogadishu wait to receive clean water from MSF. Photo © MSF

As a tentative calm settles over Mogadishu, Doctors Without Borders/ Médecins Sans Frontières (MSF) continues to provide emergency medical care throughout the country and to assist those who have fled the fighting in the capital. Since April 17, MSF has been assisting people who have sought shelter in Afgooye, a town about 30 kilometers west of Mogadishu, and those living on the road leading to Afgooye from Mogadishu. The doctor in charge of this emergency response, Gustavo Fernandez, has just returned from Afgooye and describes his experiences.

"People have been fleeing Mogadishu since the start of the clashes, but the last month has seen a real increase of people arriving in the Hiraan, Galgadud, and Bay regions, and also in Afgooye. We think that there are about 10,000 to 12,000 families who have fled to Afgooye from Mogadishu with an average of six people per family. They're mostly women and children; there are very few men.

The people in Afgooye are there for three reasons. Some have family there and have sought refuge with them. We estimate that every family in Afgooye town has at least two or three families staying with them. Or they are there because they want to stay close to Mogadishu; they have businesses in the capital and want to try to return as soon as they can. Finally, there are those who are just too poor to go anywhere else. They have got as far away from Mogadishu as they can, but they can't afford the transport to somewhere further away like Galcayo or Belet Wayne. These people have less resources, less chance of returning to Mogadishu, and no immediate solution to their situation

What I saw when I was in Afgooye was a desperate humanitarian situation. Many of the people I met had been on the street for more than a month without any assistance. They were scared and anxious and the atmosphere was very tense. When I asked people where they had been sleeping and what they had been eating, they just pointed to makeshift shelters and told me, 'There's nothing here'. People are surviving as best they can and families are taking care of themselves in groups. But it's clear to me that if the situation doesn't change, this coping mechanism will grind to a halt and many people will suffer even more.

Until now there's been very limited healthcare in Afgooye. When I was there I saw signs of skin diseases and of water-related diseases such as chronic parasitosis and watery diarrhea. In the two health structures in the area there have been around 1,700 cases of watery diarrhea reported, with 33 fatalities. The doctors in these health structures told me they had really struggled as they had no medical materials, so patients were asked to buy their own. Of course, some of them could, but the majority of them couldn't. These doctors were receiving lots of patients, but they weren't able to treat them as they didn't have the materials to do so. In Afgooye and on the road to Mogadishu there is a complete lack of sanitation. People are defecating in open areas and when you take account of all these conditions the risk of a major disease outbreak is extremely high.

As soon as we were able to, MSF started to help the displaced people in Afgooye. We set up emergency response two-and-a-half weeks ago and have sent senior medical staff to provide technical and medical support. We are supplying the two existing health structures with medicines. We've been distributing materials like plastic sheeting so that people can build themselves some kind of shelter to live in, and we have started water sanitation and distribution. At the moment we're supplying 72,000 liters of clean drinking water a day. On April 26, we sent 6 tons of materials, including 2,000 liters of ringer lactate which can treat approximately 300 people with cholera, chlorination kits, emergency kits for 10,000 people, 1,000 mosquito nets, and other logistical materials. On May 4, we sent another 14 tons of supplies.

But what we're doing is just a drop in the ocean compared to what is required. The needs are huge and the insecurity has prevented us from responding as quickly or efficiently as we would have liked. Working in Somalia is always a challenge, it's a country where humanitarian actors must be really careful to be impartial and neutral. But now, more than ever, the Somali people need assistance."