South Sudan: "The Clock is Ticking for Approximately 80,000 People"

MSF nurse Caroline Scholtes describes the situation in Jonglei State, where some 80,000 people have gone missing after outbreaks of violence in recent months. 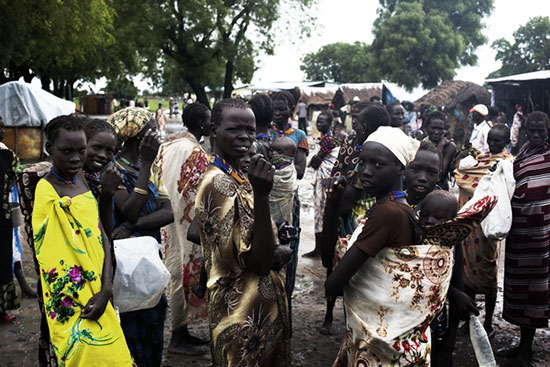 Women stand in the market after heavy rains in Gumuruk village, Jonglei State

Caroline Scholtes, a Belgian nurse, just returned from a three-month assignment in South Sudan's Jonglei State, an area that has suffered many outbreaks of violence in recent months. Since these clashes, some 80,000 people have gone missing in the state. In hiding, they are cut off from all humanitarian aid.

What is the situation in the state of Jonglei?

In the wake of a series of skirmishes between rebels and the South Sudanese armed forces, the people in Pibor County, in the south of the state, fled into the bush. Violent intercommunal clashes in the bush followed in mid-July, leaving many wounded. Since then, people have been afraid to return home or to go into villages or markets because they are scared of being targeted.

I saw a small boy of three or four years old who was traumatized when an adult approached him because he had spent three days alone and helpless in the middle of the swamps.

We know that some have taken refuge in Kenya, Ethiopia, and Uganda, and in Juba, the capital. Twenty-four thousand people are located in the area surrounding the village of Gumuruk and 10,000 more in two remote areas of the county. But there are still 80,000 whose whereabouts are unknown, who are hiding, who have gone to ground and are having to survive in unsafe and difficult conditions.

What does MSF's work in the field involve?

Many humanitarian organizations have been evacuated because the health centers have been plundered. MSF has a clinic in Gumuruk that is providing primary medical care. In two days, our team set up a surgical unit in a tent at the clinic. From here, we are trying to access the war-wounded and the people who have fled and are living in unprecedented isolation. We do not know what state of health these people are in.

We have also carried out mobile clinics by helicopter. We land in the bush with boxes of medicines, plastic sheeting, and stakes to provide a little shade and we go about our work with just the basics. Messengers, as in Roman times, travel through the bush and pass on the word to the people they meet. We would very quickly receive hundreds of people. Every day, we had more than 100 hand-picked consultations: people with serious infections, malnourished children, pregnant women with infections, and the list goes on.

We noted that the people refused to go back to their villages when they needed to, even for food or treatment. In Gumuruk, we had patients from the bush, some of whom were war-wounded, but mainly women and children. The men stayed in hiding. These people gave accounts of days of flight in the bush, families dispersed, broken up, affected by the death of those close to them. I saw a small boy of three or four years old who was traumatized when an adult approached him because he had spent three days alone and helpless in the middle of the swamps.

These people truly have nothing. When I asked the women what their priorities were, they all said that it was food and access to medical care. They were afraid of famine because they are in an unprecedented situation: they no longer have any animals following the cattle raids in mid-July, they have not been able to farm their land, and they have no means to feed their families. As they cannot go to the villages, these people are in a drastic humanitarian situation. I could sense a real call for help in their stories.

What are the challenges facing the MSF teams?

This region is a vast flat plain, with swamps and winding rivers that feed into the Nile. It is an open, barren landscape with barely any roads. The minute there is a major rainfall, these zones are flooded and become swamps. Firstly, therefore, there is the logistical challenge of accessing these people in the middle of the bush. Helicopter is often the only way. There is also a geographical challenge: in a vast region four times the size of Belgium you can imagine the difficulty of finding people in hiding.

These people will very probably face the risk of epidemics, as well. With very limited access to potable water and food, epidemics such as cholera, malaria, and measles are a threat. We also fear a Hepatitis E epidemic, which has already broken out in the refugee camps up north near the border with Sudan, where MSF is also currently working.

These people have an outlook and a physical strength that are awe-inspiring. Listening to them sent shivers down my spine.

It really is a daily battle for our teams. The clock is ticking for these thousands of missing people. When I left, the teams were going to receive a helicopter for carrying out intensive searches. We are also lobbying other organizations to distribute food, shelters, water purifying equipment, and so on.

What struck you personally during this assignment?

Day-to-day life was not easy for the teams: we were living in tents with very limited access to clean drinking water, we were cooking over a fire, and our means of communication was limited to satellite telephone. But when you land in a helicopter in the middle of the bush and are surrounded by hundreds of men and women who still have their pride despite the unimaginable living conditions, you cannot remain indifferent.

These people have an outlook and a physical strength that are awe-inspiring. Listening to them sent shivers down my spine. Meeting these people, you cannot help but tell yourself that, despite the basic living conditions, you must persevere.