South Sudan: "People are Dying, People are Suffering?This Is a Crisis" 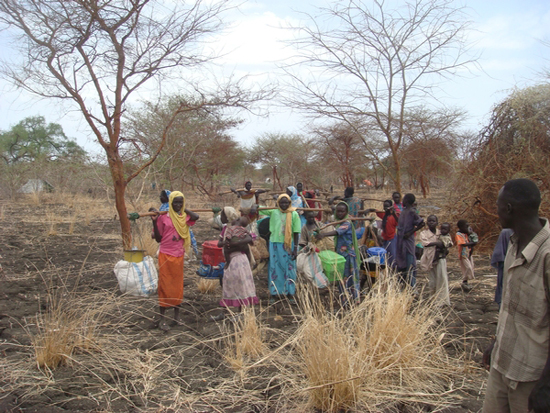 A new influx of 30,000 refugees crossed the border from Sudan's Blue Nile State into South Sudan's Upper Nile State over a period of about two weeks.

Water has already run out in one of the temporary gathering places for around 30,000 newly arrived refugees in South Sudan. Because the existing refugee camps in the area are full, the new refugees initially settled at a new temporary gathering point. As water supplies ran out, refugees began to move to a second site as well. They are sleeping under trees, with no shelter, virtually no food, and a quickly diminishing water supply. In this field news update, Erna Rijnierse, Doctors Without Borders/Médecins Sans Frontières (MSF) medical team leader, describes the situation and the urgent need for the refugees to be relocated to a better place.

The roads here are a nightmare, especially after rains when it is almost impossible to get to the people in need. You only have a few seats in the car, so you take the sickest of your patients—but there are people that you have to leave behind and hope that you can see them again tomorrow. As a doctor, this is a very painful thing to do. But we have no choice, we have to prioritize the most critical patients.

The problem in these temporary refugee places is that there are not enough humanitarian organizations on the ground. These people have been walking for weeks to get here so they are already weak, especially the most vulnerable ones—the elderly, children under five, and pregnant women. MSF has been providing water at the first refugee site, but the surface water pool where we were treating and distributing water is now empty. There is no more water at the first site. We are treating and distributing water at the second temporary transit site, but the available water there will soon run out, too. This is why it is so important for the United Nations refugee agency and its partners to move these refugees to a better place without delay.

Every day we go to the small tented clinic we have set up. We have to triage to ensure we are seeing the most severe cases. Yesterday, just before we were going to leave the clinic at the first site, there was a small child who was brought in gasping and in a state of medical shock. We managed to save that child, a timely reminder for me of why we are here and what we are able to do, even in the toughest circumstances.

Last week we conducted a total of 537 consultations at both temporary refugee locations. 292 consultations were for diarrhea and 40 were for respiratory diseases. Of the 342 children who came to the clinic and were screened for malnutrition, 38 percent of them were malnourished, which is way above emergency thresholds. With the rainy season coming up, we are also seeing the first cases of malaria. People are living close together and, with the rain, the temperature is dropping—so we are bound to see other diseases, and pneumonia, especially in young children, will likely become more prevalent.

Aside from the urgent life-saving medical care we are providing, perhaps the biggest impact we can have will be on prevention of diseases. Tomorrow we start a measles vaccination campaign for children under 15. Measles is a very contagious and potentially fatal disease, particularly in a refugee situations where there is a large number of people in a small area. These people have not been vaccinated, so this is something that is also part of our first emergency response.

The situation is dire. There has been very little progress in identifying a place of refuge for these 30,000 refugees, and rain and logistical constraints have paralyzed organized movement. The refugees don’t even have a piece of plastic to sleep under—so as you can imagine this [does] not improve the health situation of this very vulnerable population. There is no question—these people need to be moved right now to a suitable place where they have food, water, and shelter; and where their health can be assured. Time is not on their side.