View Photo Michael Goldfarb/MSF
Health promotion posters flank the entrance to the incinerated remains of the emergency room at the MSF hospital in Leer, South Sudan, February 23, 2014. The hospital was thoroughly looted, burned, ransacked, and effectively destroyed, along with most of Leer, sometime between the final days of January and early February, 2014, leaving hundreds of thousands of people cut off from critical, lifesaving medical care. The hospital, opened by MSF 25 years ago, was the only secondary health care facility in Unity State.
Michael Goldfarb/MSF
Click to hide Text

Four months ago, the Doctors Without Borders/Médecins Sans Frontières (MSF) hospital in Leer, South Sudan, was destroyed by unknown attackers. Here, MSF project coordinator Sarah Maynard describes the devastation she witnessed on her return and the team’s efforts to get medical services up and running again.

“I’d been working in Leer hospital since September. The place was always busy, with hundreds of patients, caretakers, and visitors every day. Some 270,000 people depended on us for medical care. We had the only surgical facility in southern Unity state. After the conflict started in December, we managed to keep operating, but as the frontline came closer, the international team evacuated in January, leaving the local staff to run the hospital. When we left, we never for one minute imagined the level of destruction we’d find later.

When I returned to the hospital in February, the first moments were really shocking—the place where I had spent all my time, and where the team had been so busy, day and night, was utterly destroyed, burned and looted.

What struck me most was the absence of life and movement—I’d never seen the hospital without patients in it: no staff; no noise; not even babies crying. Parts of the hospital had been so badly [damaged] I hardly recognized them. All of the beds had been looted. We had to scramble over piles of damaged surgical materials to look into the operating theater, where we saw broken vials and supplies all over the floor. One of the operating tables was burned, the other damaged.

In the tents and storerooms, all of our stock—months’ worth of supplies—was gone or destroyed: all the drugs, dressings, vaccines, therapeutic food, and laboratory tests were either burned, looted, or strewn on the floor, along with patient records and damaged medical equipment.

We were able to speak to our South Sudanese staff who had fled into the bush. What they told me was horrific—they were living in fear for their lives and, although the team had managed to evacuate some surgical patients and take some supplies with them to set up 'bush clinics,' there was no other health care, little food, and no clean water. 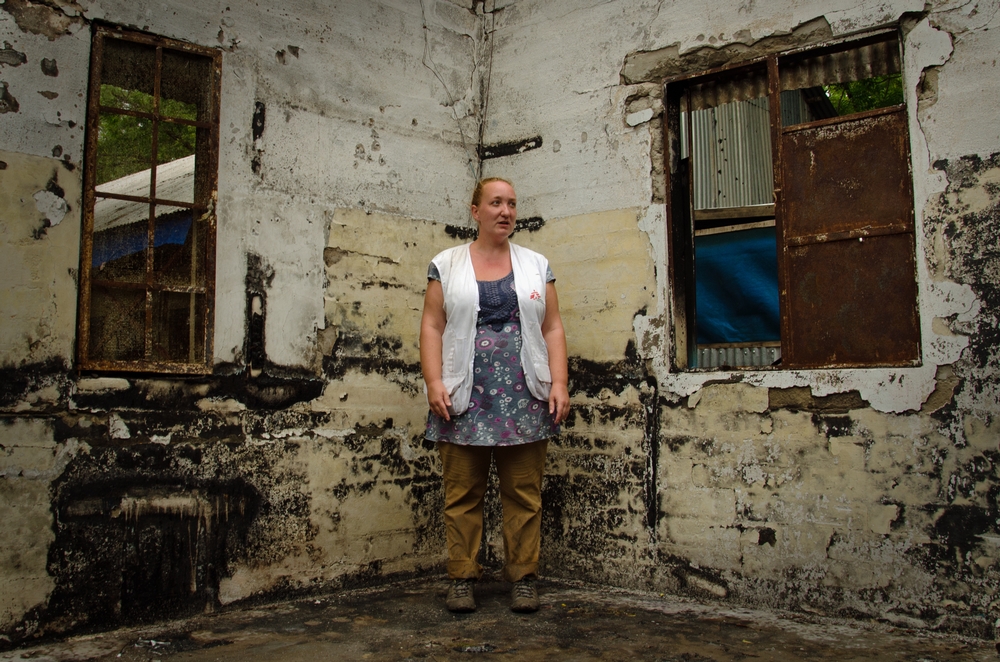 As people began to return to the town, we restarted some activities in May. It was clear that people’s medical needs were enormous, and there was no other health care available for miles. It was also clear it was going to be extremely difficult to start operating again in a burnt-out hospital. There were dozens of people quietly waiting on the benches in the outpatient department; some had even come to sleep inside the hospital, wanting us to admit them right away.

It was extremely difficult to explain that we couldn’t run all our services because we had no drugs, no equipment, no way to treat them properly. But still people kept on coming, many with diseases directly related to living in the bush, such as malaria, acute watery diarrhea, and respiratory tract infections.

At first, the medical team sat on the floor to do consultations as we didn’t have a stick of furniture—not a chair, not a table. We did a nutrition screening, with alarming results, and started a feeding program for severely malnourished children under five. Hundreds of mothers were bringing their children for weighing and measuring—I remember thinking we might admit as many as 500 children by the end of the first week. In the end it was 900.

We cleaned up bit by bit—first trying to get rid of the bats which had taken up residence in the wards, then cleaning up the drugs, vials, and broken equipment all over the floors, then trying to get power and water running again. We found a bullet hole in one of our water pipes, and the control panel for the water pump had been ripped off the wall. In the meantime the team carried water in jerry cans from the borehole. It was a very big day when our logistics team managed to get the water running again.

But every day it took to clean up and replace supplies was a day that we couldn’t admit the sickest patients. Although we had no delivery bed, mothers were coming and giving birth on the floor, wanting to at least be close to the medical teams.

One day a staff member pointed out a dead body lying outside the hospital. It was a man we’d seen in the outpatient department who [was suspected to have] tuberculosis. We couldn’t admit him to the ward, but he stayed just outside the hospital gate because he still wanted our help. He had no caretaker and died under a tree outside the gate.

We’ve made a lot of progress since then. We’ve been running medical services in the hospital for eight weeks now, and we are seeing almost 1,300 patients every week. The inpatient ward has reopened, although the patients are lying on mattresses on the floor as we have no beds. We have admitted more than 2,500 severely malnourished children into our feeding program—and some have already been discharged, having reached their target weights. We’re using more than 800 kilograms [about 1,764 pounds] of therapeutic food every day—all of which has to be flown in to replace the looted supplies. The maternity ward opened officially last week, so mothers can now give birth on a delivery bed instead of the floor.

We’re still cleaning up the hospital. When I walk past the burned parts of the hospital I try not to look too much. It’s too sad to think of all the people who went without health care for so many months after the destruction.  Now, I want to concentrate on the parts where life has come back again, with noise, movement and lives being saved.”

Health promotion posters flank the entrance to the incinerated remains of the emergency room at the MSF hospital in Leer, South Sudan, February 23, 2014. The hospital was thoroughly looted, burned, ransacked, and effectively destroyed, along with most of Leer, sometime between the final days of January and early February, 2014, leaving hundreds of thousands of people cut off from critical, lifesaving medical care. The hospital, opened by MSF 25 years ago, was the only secondary health care facility in Unity State.
Michael Goldfarb/MSF