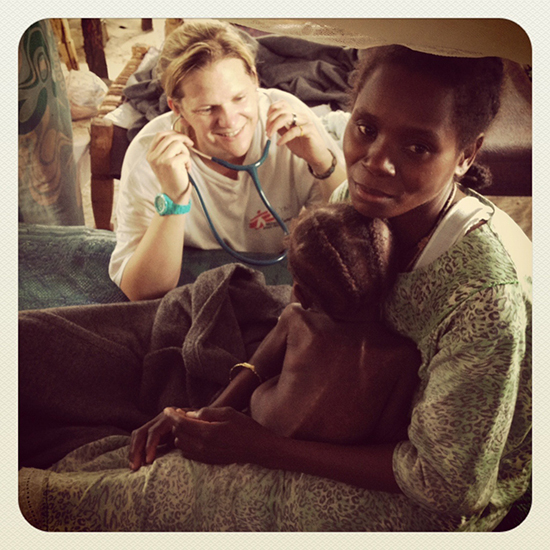 Dr. Lynn Jacoby treats Aziza while her mother holds her. The little girl was severely malnourished and in danger of dying at the Batil refugee camp in South Sudan.

“I’m a pediatrician and this was my third field assignment with Doctors Without Borders/Médecins Sans Frontières (MSF). In my briefing with the emergency coordinator, she told me there was widespread malnutrition in the Batil refugee camp in South Sudan, and a lot of children were dying. My job would be to open an inpatient therapeutic feeding center to help decrease child mortality.

One of the patients who really stays with me is Aziza. Aziza was a severely malnourished little girl who was hospitalized the entire time I was there. She almost died multiple times a day for the first week. She would go into shock, because she was suffering from lots of infections that were really difficult for us to treat. We had to be really careful with Aziza because malnourished kids lose so much muscle and a lot of the muscle they lose is in their heart. If you give them too much fluid, they go into heart failure. So we sat with Aziza and we gave her small amounts of fluid, and then we’d recheck her heart rate every 15–20 minutes. We weren’t doing anything fancy, but it was time-consuming, and you have to pay very close attention.

By the time I left, she was sitting up, and even smiling a little bit. A couple of weeks after I left, Aziza finally went home.

The refugees in Batil Camp wanted to know our stories. They asked why we had come, and how did we even know they were there? It had a major impact on them to realize that we were documenting their situation, and that this information was enough to get people like me to come there to help them. I think that is really powerful. I think that knowing someone on the other side of the world saw what they’re up against, and cares enough to come, really helps people.”