South Sudan: "These People Have Already Had Such a Challenging Journey, and It?s Not Over"

Vanessa Cramond, medical coordinator for MSF in South Sudan's Maban County, describes the dire situation of some 35,000 refugees who have crossed the border from Sudan. 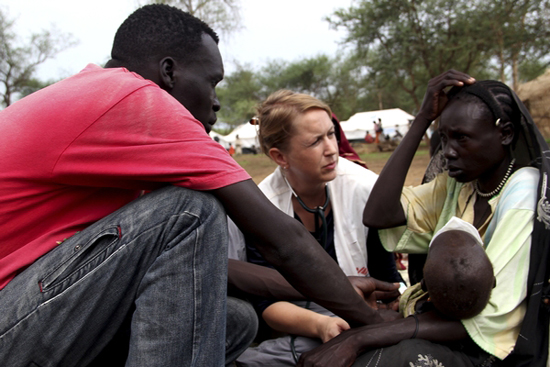 Vanessa Cramond, a nurse from New Zealand, is medical coordinator for Doctors Without Borders/Médecins Sans Frontières (MSF) in Jamam, in South Sudan’s Maban County. Here, Cramond recounts how MSF teams have been moving with a large influx of around 35,000 refugees who crossed the border from Sudan’s Blue Nile State in May–June, supporting them with medical care, clean water, and shelter on their journey to Jamam camp. She highlights the challenges faced by MSF teams as they try to provide assistance in an inhospitable place where rains; disease—including rising rates of malaria—a widespread lack of safe water; and the long, arduous journey have left people vulnerable and in dire need of medical attention.

We started to receive reports about a large movement of people arriving from Blue Nile State into Upper Nile State toward the end of May. The MSF teams were able to quickly make an emergency assessment and start providing life-saving health care to this new refugee population. In the past four weeks, we’ve done more than 3,000 medical consultations with this group of new arrivals, primarily treating diarrhea, respiratory infections, and malnutrition.

From what we understand, some of this new refugee population had been planning their move for some days, while others seemed like they left very quickly, which affected how prepared they were, what they brought, and their ability to look after themselves during their journey. You can see that some people don’t have blankets; they don’t have cooking equipment, basic items to survive. Some of them were really, really struggling to look after themselves. In response, we did an emergency distribution to 4,000 households [approximately 20,000 people] of non-food items, emergency relief items—such as jerry cans—blankets, and plastic sheeting, which helps protect people from the elements, especially the many young children and pregnant women.

Water has been and remains the biggest concern. There is not enough safe water for people to wash their hands and manage their own family’s hygiene. The conditions are hard to imagine, many families sharing small makeshift shelters. So much close contact can become a health risk, but they have no choice. People have been drinking from the hafirs [natural reservoirs], too, and we’re seeing a worrying percentage of the population here with diarrhea: about 40 percent of all medical consultations have been related to diarrhea.

It’s about 50 to 60 kilometers [about 35 miles] from the border to Jamam, a very long way when you’re traveling by foot and without water. At [the informal transit point at] kilometer 43, we tried to make the best of a very difficult situation, but water ran out quickly. The population was forced to walk to kilometer 18 (“KM18”) in search of more available water, and MSF quickly set up treated water stations and oral rehydration points along the road. But tragically, every day our teams saw people with acute dehydration as they walked, and some people passed away despite our attempts to revive them. They were simply too weak to survive. At KM18, we set up a mobile clinic and provided clean water and did the emergency distribution of relief items. But again, there wasn’t enough water there to last more than a few weeks. It was clear to everyone they had to continue their journey to seek more sustainable refuge. 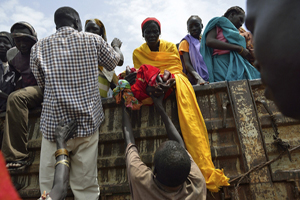 Refugees from the KM18 camp are transferred to Batil.

UNHCR [the UN Refugee Agency] and other agencies agreed to set up a new camp in Batil, and some of the KM18 population has started to be moved there. It’s not an easy journey because of the rain and the roads, but, bit by bit, as the weather allowed, the population has been moved and we’ve tried to support them by checking that people boarding the buses and the trucks are fit to travel. We wanted to address any urgent medical needs that we could, and refer people to the nearest MSF hospital who didn’t seem well enough to endure that journey or survive the conditions in Batil. So we’ve tried to be supportive in terms of addressing diarrhea, respiratory infections, and severe acute malnutrition. In the last week, we’ve seen an increase in malaria, too, and an incredibly significant number of eye infections across the whole population, in children as well as adults. It’s a real sign that the population is struggling to manage their hygiene; they simply do not have the water needed to stay clean and wash clothing and blankets. And now with the rain—you can imagine for a malnourished child, hypothermia is a real risk, their small bodies unable to regulate their body temperature. Their blankets and clothes get wet, they get cold. For those children who are already vulnerable, there is a huge illness risk and for some it will lead to death. 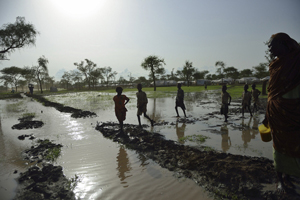 Children in Jamam must wade through water and mud after a night of hard rain.

Having been on the move already for a number of weeks—some for months—the closer this community gets to the end—to shelter, consistent food distribution, and the prospect of a safe new home—the more they want to get there. So it gets somewhat chaotic as trucks get loaded and unloaded, and we were unable to medically check the people boarding the vehicles at KM18 for a few days because of the sheer volume of people being moved. When they arrived in Jamam, they were just as eager to get off the truck as they had been to get on them. MSF teams tried to identify children and adults who were dehydrated, malnourished, or unwell as best we could, so we could provide emergency care. You really only have a few seconds to see if each person needs assistance before they move on.

We had some really serious cases coming off nearly every truck: children with high fevers; severely dehydrated people; severely malnourished, drowsy, and hypoglycemic people who urgently needed medical support. Over the last four weeks, we have admitted over one-hundred people to the hospital for dehydration, infection, or severe malnutrition. We’ve had women getting off buses already in labor, people with malaria, lots of people who need hospital-level, 24-hour care to simply secure their survival.

People have to make very tough decisions. If a child is really sick, for example, mothers have to find a way to split their care between that one child and the others they might have. It’s an unbearable reality. It’s especially difficult when they’ve just arrived in a new and unfamiliar place, don’t know where anything is or what the process will be next, and are trying to scramble to find the few possessions they have. Some of these families have already split up, and the mother is on her own. Within this culture, it’s not always easy for women to make decisions in these circumstances. Some evenings, I’ve talked to women about bringing their sick children to the hospital and they say they have to wait until their husband arrives. In those cases, we do what we can to provide immediate health care on the spot until someone can make that decision to bring the child to hospital. 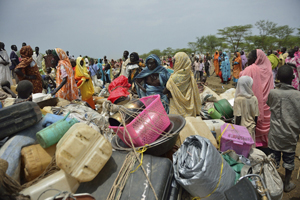 Thousands of refugees at KM18 wait to be transferred to Jamam.

We’re also just meeting this community, so we have to be patient and try to understand their needs. What we might see as a priority is not necessarily the same for the family; that’s part of this new relationship we’re trying to develop.

During one usually crazy morning helping the buses board, I encountered three women who were queuing for the bus to move from KM18 to Batil camp. Buried beneath their layers of colorful clothing I discovered three very tiny babies in their arms, all of them very small and underweight. Two were doing quite well considering they had been born on the journey from their homes in Blue Nile State. One was not doing so well. Luckily, much of the family was there, so we could explain the conditions and the challenges in Batil and all three women and their husbands agreed to let the mothers and their small children return with us to Jamam hospital, and for the fathers and the other children to go on and settle in Batil. Now, we have three very sweet but very tiny babies here in Jamam with us and they’re improving each day. I think if they had gone on to Batil, they would have been extremely vulnerable and may not have survived.

For acute malnutrition, there are two phases of the response. One is community-based care using ready-to-use therapeutic food, a nutrient-rich paste that children have to eat every day. Those kids are sick and vulnerable, but medically they’re doing okay. Then we have children who are severely malnourished and have a complication such as malaria, diarrhea, chest infections, or malnutrition so profound that they’ve lost appetite and ability to eat. Those kids generally need hospitalization where we really control the feeding and recovery process and carefully treat any infections. It’s a delicate balance. It can take anywhere from weeks to sometimes months to turn around a child who is severely malnourished. But here, they’re in the right place. Over the last four weeks, we’ve admitted over 300 children from this particular group of new arrivals into the community-based nutrition program, and we’ve admitted more than 30 children into the inpatient program for 24-hour care. I can’t say that everyone is going to make it—some are simply too sick and too vulnerable. Life will remain precarious, but I know there will be lots and lots of success stories in there as well.

Hopefully, over the next six weeks some of the most present morbidities, such as diarrhea, chest infections, and the skin and eye infections, will start to dissipate when people get more consistent access to food, clean water, shelter, and health care. The stagnant water all around Jamam is a risk; I know already in Batil and Doro camps MSF teams are seeing higher levels of malaria, which can be seriously detrimental to pregnant women and young children. And, of course, there’s the risk for cholera, which is endemic in Blue Nile State, so some of these people may already be carriers. So we’re doing our best to ensure that we’re ready to respond and to try to mitigate the risks before it happens. If it does happen, we will do everything we can to contain the spread.

We’ve had to scale up rapidly and it has not been easy. The geography of this place is not to be taken lightly. I think we’ve done a great job of scaling up quickly and providing care for the most immediate health issues and emergent needs that we can. These people have already had such a challenging journey, and it’s not over. There are still difficult months ahead for them. But, they’re incredibly vibrant, they’re still smiling and saying hello and sharing their tea! I hope that we can continue to work alongside this community, learn more about them as they learn about us, and together we’ll hope to see an improving situation for them in the future.

MSF has been providing aid to refugees in Upper Nile State since November 2011. MSF is running medical services in the three main camps—Jamam, Doro, and Batil—and is running mobile clinics for refugees still in the transit sites, providing 5,000 consultations per week across all sites. MSF is also engaged in extensive water supply activities at various sites in and around the camps.