South Sudanese Refugees in Uganda: "Starting Life All Over Again"

Vanessa Cramond is a nurse from Auckland, New Zealand, who recently spent two months as emergency medical coordinator for Doctors Without Borders/Médecins Sans Frontières (MSF) in Uganda, where MSF is responding to an unprecedented influx of refugees from South Sudan. Here, she describes the situation.

I’ve worked in population displacement responses for over a decade, and I’ve never seen the sheer size and magnitude of what I witnessed in Uganda. Over 230,000 South Sudanese people have arrived in Uganda since January 2017, fleeing escalating violence [perpetrated] by various armed groups in the Equatorial region, and all in need of immediate humanitarian assistance. That is a staggering number of people. There are very few countries that could cope with a population influx like that. In total, Uganda is hosting around 900,000 refugees, making it the largest refugee-hosting nation in Africa and one of the biggest in the world.

Uganda has a long history hosting refugees from surrounding nations, and because of that the government does not encourage "refugee camps" as we might see and work on in other countries. Rather, refugees are given a plot of land, some basic items and food, and encouraged to resume a more "normal"-looking life. People can move more freely, which is fantastic, but that can also make it really challenging to get to know the population and, from my perspective, to determine their health needs and deliver meaningful services. The sheer geography of the refugee settlements is also massive—you can leave in the morning and drive all day and you wouldn’t visit it all.

Many women and children have also experienced sexual violence either before they left their homes or on their way to Uganda, and MSF is working with other organizations to try to reach survivors of sexual violence.

A Focus on Water

One of the biggest problems the refugees and humanitarian actors face is access to sufficient groundwater. I’ve never seen such long queues of people waiting to receive water at the tap stands. When I arrived people were waiting days for water, with a huge line of jerrycans snaking through the settlement. As a result, water provision has been a key focus for MSF. Our initial emergency response in Palorinya, one of the new refugee settlements, has involved pumping water direct from the river Nile and treating it. The establishment of this surface water treatment plant enabled MSF to provide up to 2.7 million liters of safe water every day. It was fantastic to see the progress in the two months I was there. By the time I left, people were noticeably cleaner, and the huge queue of jerrycans had all but disappeared. Instead of days, people were only waiting hours for water. 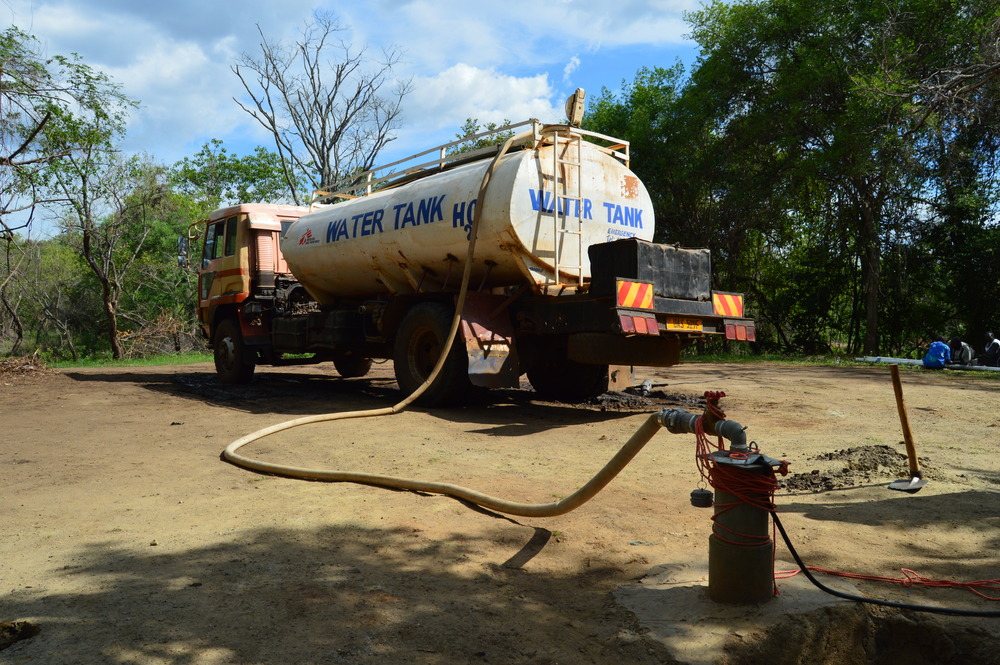 Another important part of what we’re doing is community outreach and surveillance to try and improve our understanding of the population’s health. We don't just look at who comes through our clinic doors, we must also look at who doesn’t. Our teams go from house to house asking about recent births and deaths to project key information such as the under-five mortality rate and the crude mortality rate (CMR). Those rates reveal some vulnerability among certain age and morbidity groups, but thankfully the CMR is still below emergency thresholds.

We are beginning to understand the malnutrition situation, and although the rates of severe and acute malnutrition are okay for now, we’re expecting them to worsen as the rainy season comes and infections including malaria and diarrhea increase, making children more susceptible to malnutrition.

One person I met who has stayed in my mind is a young woman who had recently arrived with her small children. I met her standing in the rain in Palorinya, in one of the newly populated zones of the settlement, and it was chaos—people everywhere, under trees, trying to figure out what to do next. Her husband was missing—she didn’t know if he was dead or alive.

She had been treated for leprosy in South Sudan, and you could see the effects of that infection on her face, feet, and hands. Leprosy’s effects are irreversible once the cutaneous damage is done, so she urgently needed to resume treatment. But she had two young children to care for, as well as having to queue for water and food and build a shelter. So she faces enormous challenges, let alone having to consider being admitted to a hospital where she could be re-established on treatment.

It is distressing to meet people who have experienced multiple displacements. I met one gentleman who had been displaced twice before in his lifetime, and this was his third time as a refugee in Uganda. It’s hard to hear how many people have had their lives so frequently disrupted, and just when they think things are getting better, that more insecurity and uncertainty comes along, and they are on the run again, become refugees again, having to face starting life all over again.

Read More: "We Left With Nothing"