These patients must adjust to a whole new reality of living with paralysis in a post-conflict setting and they are trying to come to terms with the permanent loss of movement and sensation that is a daily reminder of the war. 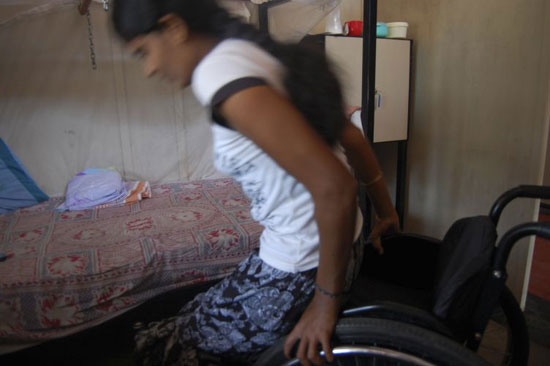 Suvarna, a 22-year-old patient at Pompamadhu Hospital in Vavuniya, gets into her wheelchair.

For more than two decades the people of Sri Lanka have lived with violence and conflict. Since the end of the war last year, survivors have gradually begun returning to their homes and trying to rebuild their lives. In the North of the country, Doctors Without Borders/Médecins Sans Frontières (MSF) is running an innovative specialist rehabilitation program for people with spinal cord injuries sustained during the conflict.

We arrive at Pampaimadhu, just in time for the morning’s physiotherapy session. Patients in wheelchairs gather round the edges of an open-sided tin-roofed building in the middle of the hospital grounds. Despite stern instructions from MSF physiotherapist Valeria Maglia, there are many smiles, as well as occasional grimaces when a stretch causes pain or discomfort. The session lasts about 30 minutes and there is sweat on the brows of most participants. 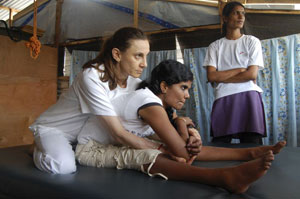 An MSF physiotherapist conducts a rehabilitation session with Suvarna.

As Valeria wraps things up, the atmosphere changes. The serene and orderly air dissolves as the space explodes into activity. Some patients gather in groups, talking and laughing. Some head off to individual physiotherapy appointments, motivational coaching sessions, nursing classes, or go to visit friends in other wards.

The atmosphere is relaxed and chatty, and I am surprised. This is a rehabilitation unit for people who have sustained severe spinal injuries and I know the likelihood is that they will never again enjoy the mobility and freedom of movement they once did. These patients must adjust to a whole new reality of living with paralysis in a post-conflict setting and they are trying to come to terms with the permanent loss of movement and sensation that is a daily reminder of the war.

I meet Suvarna, a 22-year-old former schoolteacher, who was injured by a shell blast in April 2009. “I was a bed patient before,” she says. “I couldn’t go anywhere. I couldn’t sit on a wheelchair. I couldn’t do anything without help. Now, I can do everything. I can wheel this wheelchair, I can go anywhere …”

She was injured during the final stages of the long-running conflict between the Sri Lankan security forces and the separatist Tamil Tigers (Liberation Tigers of Tamil Eelam or LTTE). As the war reached its final stages, she and her family were forced to flee their home.

“We had fled from our own place," she says. "We went to the next village, but then we had to move from there to a coastal area. We were sheltering in a bunker when a shell blasted nearby, within five meters. We all got injured by the blast, my father, my mother and me. My injury was very severe because I was hit on the spine.”

As Suvarna goes to her next physiotherapy session Valeria explains to me that when many patients arrive they are bedridden and unable to feed or dress themselves. Many suffer from complications such as infected pressure sores and incontinence. They feel they have become a burden for those on whom they are dependent for round the clock nursing care.

I ask Valeria about how the program works.

“There are three main areas that our patients work on during their rehabilitation," she says. "The physiotherapy is hard but makes a real difference to their mobility. The nursing classes cover the practical elements of living with a spinal injury: relearning how to wash and dress, avoiding bed sores and managing them should they occur. Perhaps most importantly, patients learn techniques to manage their bowel and bladder functions which restore dignity and self-respect. And our third focus is motivational coaching to help the patients prepare for life outside the unit. Once someone has completed these steps, they leave the center and start the process of rebuilding their lives. And we also help them to find training or work.”

When Suvarna returns from her physiotherapy session, she looks exhausted. She tells me the exercises she is doing are designed to give her as much freedom of movement as possible, but that she finds them difficult: “The exercises are very painful for me, because I can’t lift this leg. I can lift only my right leg.” But, despite this pain, Suvarna has made huge progress, even to the point that she can walk with crutches for a few meters, although she will never be without her wheelchair.

I ask her about the motivational coaching she received and she tells me it is vital. She says that when most people arrive, they just want to lie on their bed. She says that this was the case for her, and only when she started talking about her past and her fears could she start to think about the future and what lies ahead, outside of the walls of Pampaimadhu.

She tells me that when she first learned that the shell had damaged her spine, she thought she would never even sit up straight again: “At that time I was mentally upset. I got angry easily, and scolded my sister all the time, but now I am not like that. I think now I am all right, not 100 percent, but all right.” Although she laughs as she finishes this last sentence, her eyes tell me that it is not entirely a joke.

Suvarna is not alone in thinking like this. Other patients I talk to stress the importance of coming to terms with what has happened to them. The motivational coaching gives them confidence and allows them to help others in similar situations, creating an informal peer support network that is accessible and open to everyone.

In fact, the only doubt that Suvarna expresses is when she mentions leaving the hospital. I am surprised initially as I would expect patients to look forward to this day, but Valeria explains why some might be apprehensive about life outside Pampaimadhu.

“MSF logisticians designed and made everything here for use by people with spinal injuries. The beds have frames so that patients can get onto them easily, surfaces are smooth and wheelchair-friendly, sinks and taps are low enough. When they leave, this may not be the case. We do as much as we can with the care package we give to patients when they leave?which includes their wheelchair, bed and standing frame?but we cannot control the environment they are going to.”

Suvarna agrees. But it is not just this. She says she will miss her friends and the unit itself hugely, partly because all the people there are in a similar situation. She says that when she leaves, she knows she will be "the one in the wheelchair".

There have been more than 60 admissions to the program, which takes around three to six months. Seventeen have already returned for follow-up sessions to assess how they are doing, and all have reported back that they are happy in their lives outside of the center and no further rehab has been necessary.

I am honored to have visited the project and to be able to tell MSF supporters about it. Before I went to Pampaimadhu, I knew it was a unique project for MSF to be running. Sri Lanka is no longer a country at war, and this is no longer emergency medicine. What Suvarna, Valeria and the other patients and staff made me realize, however, is that specialist rehabilitation has a huge impact on the life expectancy for people with spinal cord injuries. Without it, Suvarna and other patients like her would only survive for two years in a post-conflict setting such as this. As Suvarna said to me, “After I finish my rehab, I will be able to live without anyone’s help. I will be able to look after myself and I will have a proper job. As soon as a suitable job comes along, I’ll do it!” I believe her.

The decades-long civil war between the Sri Lankan security forces and the separatist Tamil Tigers (Liberation Tigers of Tamil Eelam) came to an end in May 2009. In 2009, MSF surgical teams worked in hospitals in the north of the country to treat those who had escaped the war zone. Overall, MSF treated almost 4,000 war-wounded between February and June. Medical teams also cared for more than 60 patients with spinal cord injuries who needed rehabilitation. Although life-expectancy for people who have suffered a spinal cord injury is two years without rehabilitation, with rehabilitation it is returned to normal. MSF worked with the Ministry of Health to set up the spinal cord injury unit in Pampaimadhu.