Stories from the MY Phoenix

Since early May 2015, Doctors Without Borders/Médecins Sans Frontières (MSF) has been carrying out search and rescue operations in the Mediterranean Sea with two ships—the MY Phoenix (operated jointly with Migrant Offshore Aid Station) and the Bourbon Argos. MSF teams onboard work alongside search and rescue crews to provide medical assessment and care ranging from primary care to resuscitation and advanced life support. Here, patients rescued by MSF tell their stories. 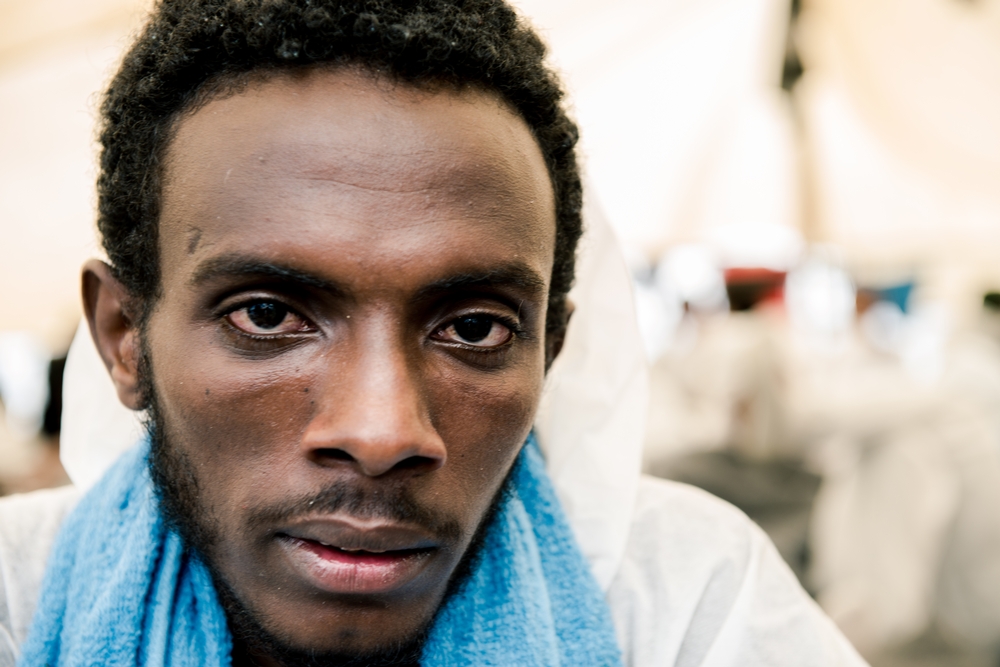 “I knew how dangerous the travel is—my friends had told me on Facebook. But I had no choice.”

Not wanting to worry his family, 20-year-old Fresghy left Eritrea without telling anyone. More than a year later he found himself imprisoned in Libya. His only chance of release was if his relatives could raise the money to pay off his captors.

“I migrated from my country because there are too many problems. My family has no work and no salary—things are impossible. The only solution was to leave. I decided to do it by myself, without telling anybody.

When I reached a refugee camp in Ethiopia, I called my relatives and they told my parents where I was and not to worry about me. This was 18 months ago.

I spent two months in Ethiopia before heading to Sudan. I decided to work in Khartoum so I could send money to my family. I spent more than a year there. Sudan is not a peaceful nation, but there is the chance of work sometimes.

I didn’t want to live in Khartoum because it is not possible to save money there. All you earn goes into rent and food. I couldn’t support my family from there.

So I went to Libya. I didn’t tell my parents I was going because they would have opposed me.

We went from Sudan to Libya in small containers, open at the back. The people were compressed in these containers, 30 to 40 people in each one. Many people fell off, but they didn’t get any help. They were left to die in the desert. Nobody can help you because no one knows where you are. Only the driver knows, but he says, 'Leave him. Those who fall down must be left behind.'

I called my family when I was in Libya and asked my relatives if they could help me pay for the voyage to Europe. I had to do that because I was taken by Libyan people. They robbed me and I had no choice but to call my relatives.

People in Libya are unkind. They argue all the time and they [treat people like animals]. They put me in a closed compound. It was very hot. There was no air supply, no facilities, and if you were sick, nobody gave you medicine because nobody cared about you. They care only about money, not about the life of the man.

Many women who were with us were raped.

When we called our relatives on the telephone, we told them what Libya was like and asked them to please hurry up getting the money, otherwise they would kill us. Libyans want to scare us, and we automatically scare our parents.

For rich ones there is no problem. But for ones like me and my parents, it takes many months to gather the money.

Once my family had paid, they put me into a boat with 550 other people. It was very unsafe. There were too many people on it. I was on top of the boat, but down below it was very hot and people started having problems breathing.

Everybody felt afraid because the boat was not safe. They didn’t give us any life jackets, and I don’t know how to swim. If any problem had occurred, I would have had no choice but to die.

I have many friends and relatives who came to Europe before me. I knew how dangerous the travel is—they had told me on Facebook and Messenger. But I had no choice. In Sudan there is no peace. In Ethiopia there is no peace. In Libya there is no government. We decide to cross very hard countries and be transferred in an unsafe boat, but this is the only choice we have: to cross the sea by the help of god.

The only thing you are thinking about is how to help your family and how to get to a peaceful place where you can live by working. My dream is to be able to provide for my family so that they will not be poor anymore." 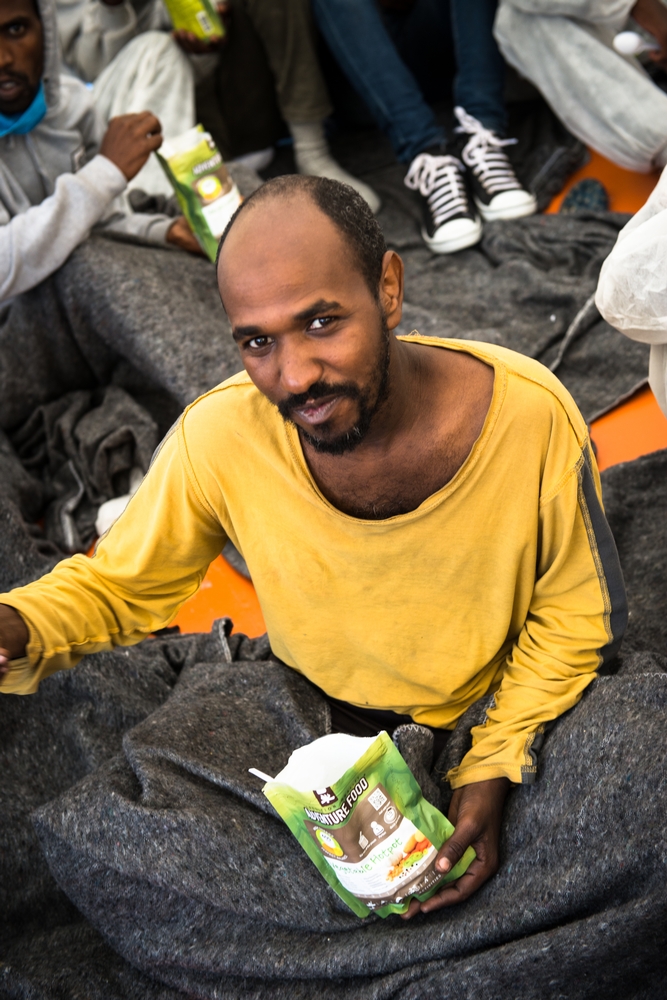 Mohamed, 32, worked as an IT technician in Saudi Arabia and as a translator for MSF in Sudan before deciding to travel with his wife and five children to Europe.

“My name is Mohamed and I come from Sudan. My parents are from Eritrea but I was born in Sudan, where I studied to become an IT technician.

My father invested a lot of money in my education. After graduating, I decided to go to Saudi Arabia because I couldn’t find any work as an IT expert in Sudan. But I was never made to feel welcome in Saudi Arabia, mostly because of the color of my skin. So I decided to go back to Sudan.

In 2006 I started working for MSF as a translator, mainly in mobile clinics. There are a lot of good doctors and good people in MSF, and I met a lot of them. I have good memories from that period. The money was good and I enjoyed the work.

After a few months, however, MSF let us all go because it was becoming too dangerous. From that moment on I tried to make my living in Sudan doing many different jobs, but it has been difficult.

Being an Eritrean born in Sudan and having moved a bit to work, I feel like I belong nowhere and everywhere—that I can easily move around and adapt. That’s why I decided to go to Europe. I have a wife and five children who are traveling with me.

Before getting on the boat to Europe, we spent three months in Libya. It is a horrible place, very dangerous, and people are not human there. The moment we crossed the border into Libya, people took me and my family into a house with lots of other people and locked us in. We were not free to move. All they gave us to eat was pasta and water.

The people that kept us locked up were always on drugs and beat us all the time. Having not much money, I sold myself to them to get on the boat with my family. I started working for them as a slave. And they kept on beating me. There was no respect, no humanity.

One day they took us, along with 400 others, to a warehouse. It was night when we were pushed onto the boat. I was put inside the boat, my family was put on top. The trip on the sea was very painful because there were so many of us in such a little space. It was very, very hot. Many people felt like they couldn’t breathe. At a certain point the engine started making weird noises and I got scared.

When we were rescued by [the MY Phoenix] we had been at sea for about eight hours. Since the rescue, some of my family are on a different boat. Now all I hope is to be reunited with them once we arrive in Italy. After that I would like to go to Switzerland.” 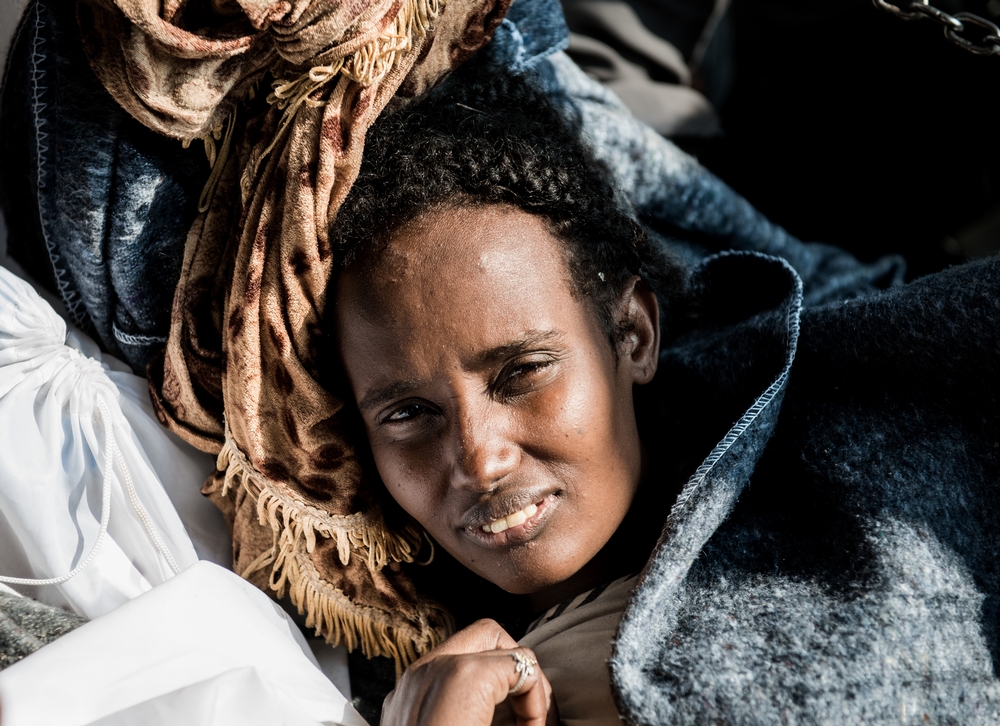 “I was beaten with bare hands, with sticks, with guns.”

Agnes, 30, and her husband escaped Eritrea with the aim of reaching Europe. Unable to raise enough money for both their journeys, her husband was forced to stay in Sudan, and Agnes and her two-year-old daughter continued alone.

“I left Eritrea four years ago with my husband. My husband was made to serve in the army, and he couldn’t provide for us. If he left the army, he’d be put in jail. Many people go to jail for no reason in Eritrea.

When we left we went to Sudan. We spent three years going from place to place, looking for work and trying to make enough money to come to Europe. Finally we made a bit of money, but it wasn’t enough for all of us, so I left with my daughter. My husband couldn’t come with us.

Crossing the desert between Sudan and Libya was very difficult. It took seven days, non-stop, in an overcrowded car.

After crossing the border, we moved from one town to the next until we arrived in Tripoli. We traveled in containers, like animals or objects. It was very dark and hot in the containers. Many people fainted because of the heat and some died.

Libya is a very dangerous place. There are a lot of armed people. Some of them are Da’esh [Islamic State]. They kill a lot of people and carry out a lot of kidnappings.

When we arrived in Tripoli they put us in a house with 600 to 700 other people and locked us in. We had no water to wash ourselves, we had very little food and we were forced to sleep one upon the other. It was very difficult for my daughter—she fell sick many times.

There was a lot of violence. I was beaten with bare hands, with sticks, with guns. If you move, they beat you. If you talk, they beat you. We spent two months like that, being beaten every day.

They asked us to pay to go to Europe, so I paid US $1,700 for me and my daughter. We were lucky because women and children were put on the deck of the boat. The people below were in the dark and it was really hot down there. I could hear some of them saying they couldn’t breathe.

I knew that the journey would be very dangerous and difficult, especially for my daughter. But what was the alternative? We could not survive in Eritrea or Sudan. Our government does not allow people to leave. With our documents in Eritrea, there was no other way for us to get to Europe.”