Syria: “The Feeling of Powerlessness is Excruciating, But I Cannot Abandon My People”

I am the only general surgeon serving a population of 100,000 people in the towns of Ar-Rastan and Al-Zafaranah in the northern area of rural Homs Governorate. Most of the other surgeons have left. It is a tough situation, both on personal and emotional levels. I cannot leave and abandon all those people at a time when other surgeons cannot get in. But I am not happy here; my wife and kids live in constant danger. I am certainly unhappy with my situation but I also know that people desperately need us.

Medical conditions are catastrophic. When the aerial campaign intensified in October, the first couple of days saw more than 100 people dying as a result of the bombardments and hundreds were injured here in rural Homs. For the displaced, options are limited; rural Homs has been besieged since mid-2012. The population is fleeing heavily bombarded besieged areas such as Deir Maalle and Al-Ghanto to other areas that are still besieged but relatively safer, such as Ar-Rastan and Al-Zafaranah.

With the wave of displacement, both areas have seen an increase in population, with more than 100,000 people now in these two small towns.

In Al-Zafaranah Hospital, for example, while the average daily consultations in our outpatient service ranged between 100 to 150 consultations per day, the number of consultations is now 1.5 times higher due to the obvious increase in the population.

It goes without saying that the average number of surgeries carried out by hospitals in relatively calmer zones is higher than interventions done in areas under bombardment. The two hospitals in Deir Maalle and Al-Ghanto are under tremendous pressure, yet they are the least equipped. Sometimes we are able to deliver equipment from other hospitals to these two that are in the midst of more intense conflict.  Evacuating the injured has proven to be a perilous endeavor, and so critical cases are immediately dealt with on the spot, regardless of the dangers.

Treating injured children is always so painful. The feeling of powerlessness that overcomes you is excruciating.

One of the airstrikes killed eight people, five from the same family—a father and four of his kids. One of the kids was barely one-and-a-half months old; she was still alive when she arrived at the hospital. Her tiny body was severely maimed from shrapnel that resulted from the attack. The problem is that I am the father of a one-year-old baby. Though we are used to encountering tragic cases, like amputations and crushed heads, when you see a suffering child you can’t help but agonize.

For a long time procuring medicines has been extremely difficult. Nowadays it is near-impossible to get medications. The routes that were normally used for the delivery of drugs—such as the one linking us with Homs—have been completely cut off. We now rely on a route leading to the north; it is certainly not easy but people are starting to use it. We hope that through this route we can obtain deliveries of medication. Still, this is an immense challenge.

Because of the numerous surgeries being performed, we are running out of anesthetics, in addition to gauze, disinfectants, antibiotics, and inflammation drugs. Hospitals in besieged areas have devised plans for emergency situations when they can’t secure medications, but they have exhausted our strategic and back-up  stocks.

"The Food Situation is Appalling"

Several hospitals in the northern Homs rural area entirely rely on MSF for their medical supplies. Without this kind of support, the situation would have been much worse. Regarding medical conditions, the support provided by MSF is just about sufficient; however, when it comes to other relief efforts such as food items and baby milk, much more needs to be done. The food situation is appalling. The associations working on the ground are incapable of addressing all the needs.

Poverty rates are ever-increasing and when you are poor you are helpless. People have no choice but to endure all this. Those who have money were able to flee. Those who do not have the money didn’t leave. Other reasons to stay include the strong belief some people have to never abandon their homeland. And my reason for staying is because I cannot abandon my people. 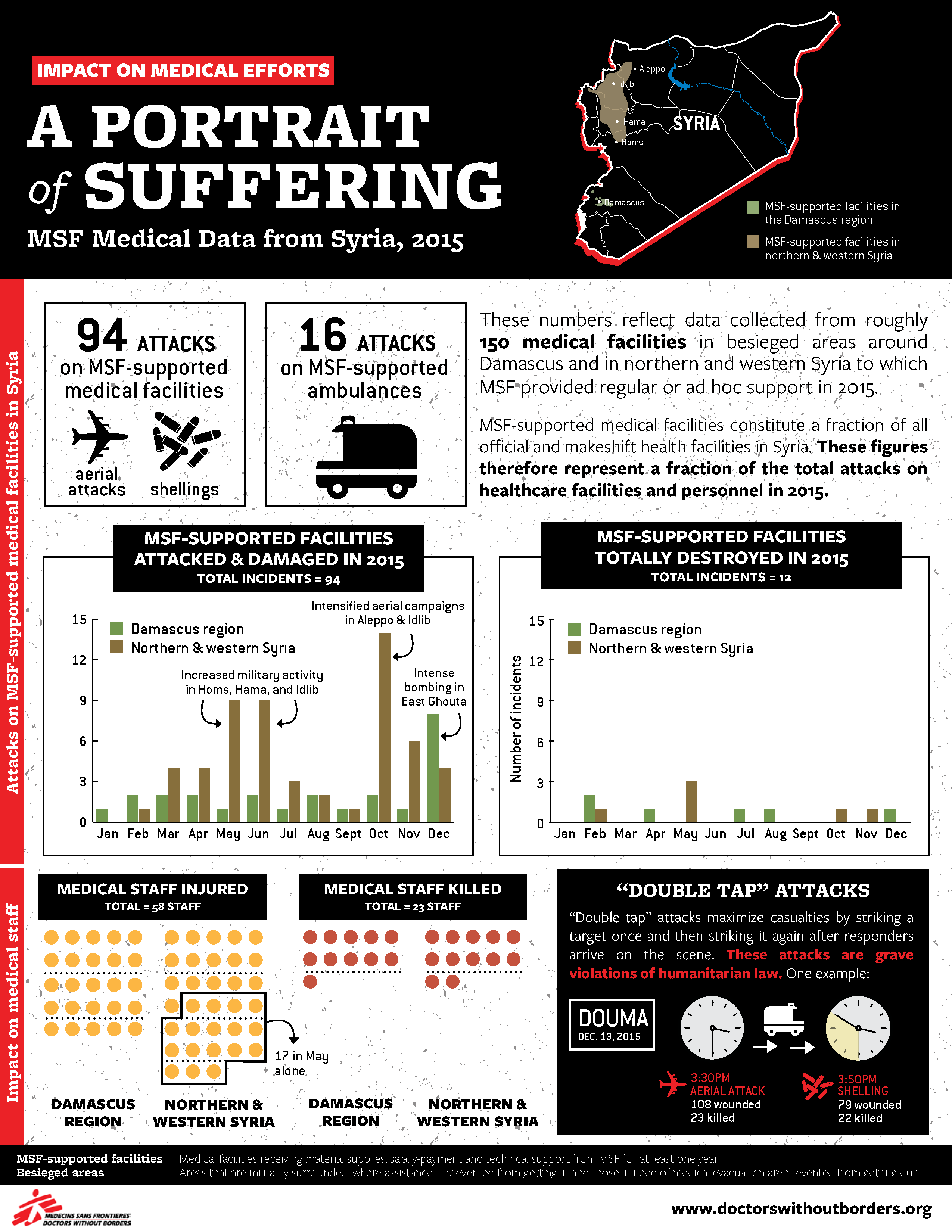