Syria: "I Feel Better, But I Can"t Walk"

A young woman from Syria starts a new life in Turkey after being shot by a sniper. 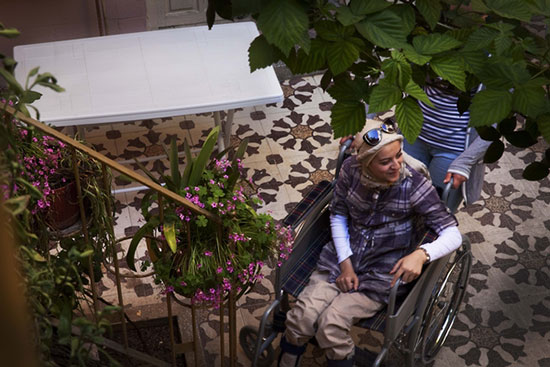 Salwah Mekrsh was shot by a sniper in Aleppo. In this photo, taken in April 2013, she is about to start a mental health consultation with MSF staff in Kilis.

Eighteen-year-old Salwah Mekrsh is unable to walk. Her mother and her sister push Salwah’s wheelchair through the streets of Kilis, a Turkish city near the border with Syria, then enter a small courtyard and stop under the shade of a lemon tree. While Salwah waits for her mental health consultation with Doctors Without Borders/Médecins Sans Frontières (MSF) to begin, they talk about how their lives have changed.

“Before the war, we used to have everything,” says Salwah, “but since it started we have suffered too much.”

Salwah was pushed into marriage shortly before the first wave of protests in Syria, in March 2011, when she was 15. Soon she became pregnant; her daughter was born just as the country’s strife was becoming an all-out civil war. After her husband tried to assault her, their marriage disintegrated, and he left, taking the baby. “He took my daughter and doesn’t let me see her,” says Salwah. “I have no way to contact them. I haven’t seen my daughter for a year.”

Salwah returned to live with her family in the old city of Aleppo, the industrial and economic capital of Syria. On November 25, 2012, Salwah was returning home with a neighbor. One of the streets leading to her house was closed, so they took another route. As they set off across a square, a sniper shot Salwah in the back.

She was rushed to a hospital in Aleppo, where the bullets in her body were removed. She was in critical condition, however. Her family tried to send her to Turkey for medical care, but she was not allowed to cross the border. Then her family heard of a hospital in the area run by MSF and took her there. MSF’s medical team was able to organize her referral first to Kilis hospital, just across the border in Turkey, and later to a hospital in the nearby Turkish city of Gaziantep, where she spent 12 days in the intensive care unit.

“Now I feel better, but I can’t walk,” says Salwah. As she tries to adjust to her circumstances, she is receiving support from an MSF community health worker named Lina. “Miss Lina told me the story of someone in her family with a similar problem, not related to the war,” Salwah recounts. “She gave him psychological support, and now he is doing okay. Knowing this made me feel better.”

The psychologist is ready and the consultation can start. Salwah’s mother and sister wait for her outside, smoking beneath the lemon tree. When the sun goes down, they will return to the apartment they have rented in Kilis. They won’t hear the shelling and the bombs of Syria. They won’t be afraid of losing their lives. Even so, they all long for the moment when they go back home. Asked where she hopes they’ll be in the days ahead, Salwah’s mother says, “in Aleppo, inshallah.”