Unsanitary and overcrowded conditions, particularly in the cramped mass shelters that house new arrivals, cause a host of health problems for refugees, including diarrhea, respiratory tract infections, and skin conditions. Children, as well as expectant or new mothers, are often the most vulnerable illness. Malaria is one of the biggest risks in the camps, particularly during the  rainy season, when stagnant water provides a breeding ground for mosquitoes. In January 2017 alone, Doctors Without Borders/Médecins Sans Frontières (MSF) teams tested over 31,200 people and treated the 16,812 who were found to have the disease.

Here, four MSF patients in Nduta and Nyarugusu camps describe the shelter, water, food, and hygiene challenges they face, as well as their lives in the camps and the health problems they encounter. 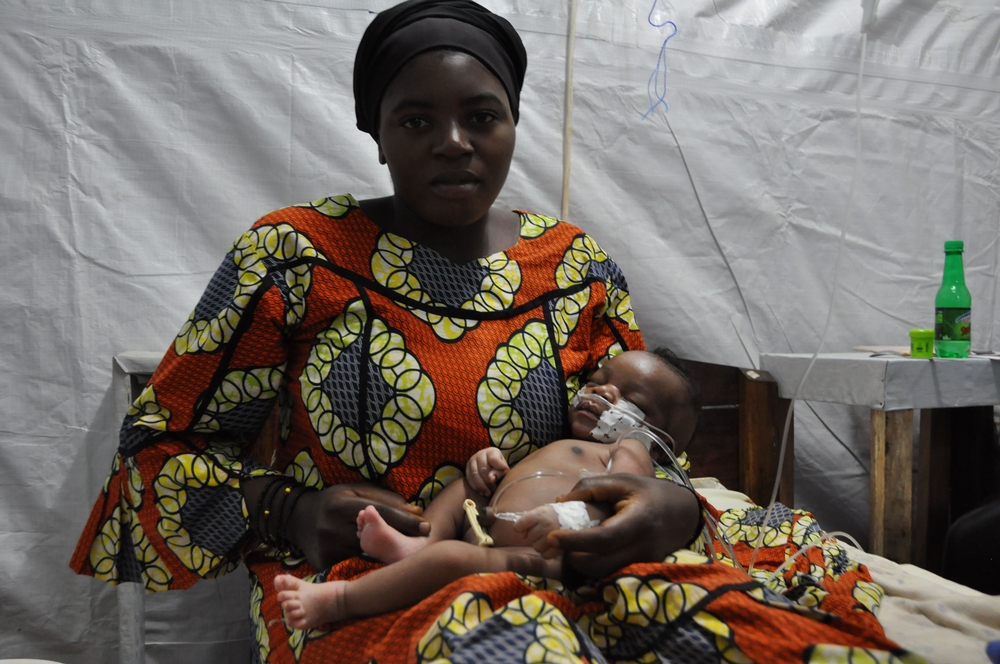 "My baby has a life of hardship ahead of him—what hope is there for a child born in a refugee camp?"

Aisha, 23, lives in Nduta Camp with her husband and two children. She recently gave birth to a third child at the camp's MSF-run maternity hospital, making her one of the 3,005 women who delivered at MSF facilities in Nduta in 2016. Due to complications during labor, Aisha's baby is being kept in the hospital for ongoing care and observation.

"I'm so happy about the birth of my son, but I`m also concerned about his future. He was born after fetal distress. He can't breathe properly, he hasn't been moving, and he still hasn't cried or made any of the noises that babies normally make. He's also unable to feed naturally, so he's eating via a tube. He is only five days old but he has already seen so much suffering. I know that he has a life of hardship ahead of him—what hope is there for a child born in a refugee camp?

When I think of the future, I feel sad. I have no money or way to provide for my baby and two older children. I've been in the camp for 10 months now but food is still a problem—I don`t have the ingredients I need to make proper meals and we normally run out of supplies long before we're given our next ration. I try my best to provide for my children but they don't eat well and they also don't have enough clothes.

I used to have so many dreams but now I try to block them from my mind—there's no opportunities for me to plan or develop myself anymore. I feel trapped here and wish I could find a peaceful place to escape to, but I don't have any other options. When I remember what happened to me back home, I know it`s better to stay in Nduta. I will never, ever go back to my country. Instead I just have to try to find a way to keep going here." 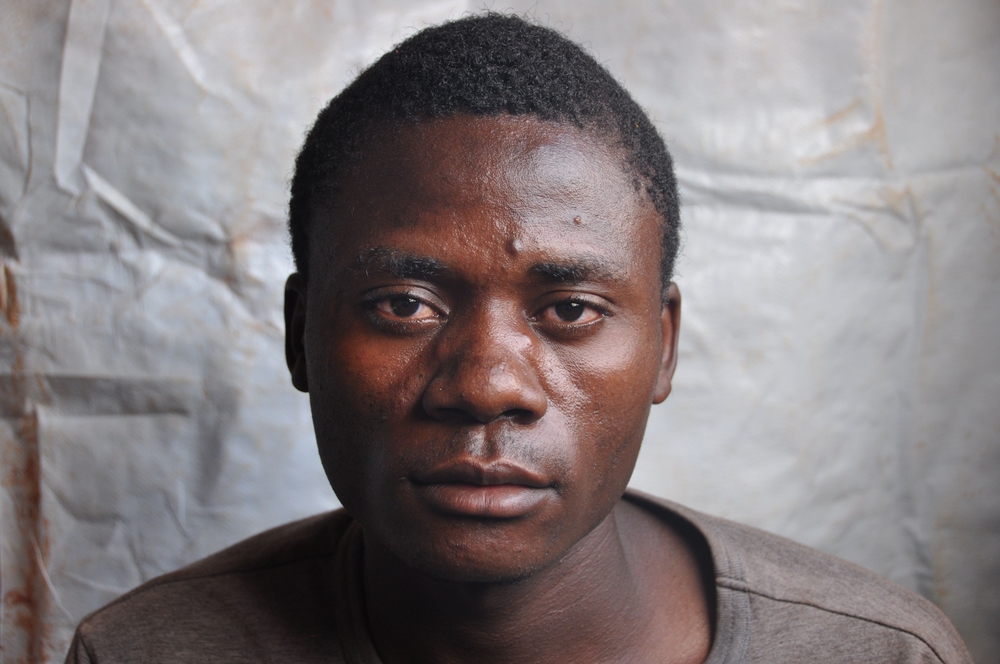 "Refugees never have a good life—it's a struggle to get enough food and water and living in a tent wears you down. But it's better than living in fear at home, so I will stay in this camp until I die."

Ramadhani, 26, was diagnosed with malaria at one of the three health posts MSF runs at Nyarugusu Camp. He is one of the 6,802 people MSF treated for malaria in January in Nyarugusu.

"I`ve been sick since yesterday evening. I have a headache and nausea and feel very cold. I can't stop shivering and shaking. I came to the MSF clinic today and the doctor here tested my blood and then told me I have malaria. I'm waiting to receive some medicine that will help me get better. I have a mosquito net in my tent in the camp and although I use it, I still got sick. I don't know how I got ill.

I've been living here for six months with my wife and two children, who are aged four and five. My wife is four months pregnant but has been having stomach pains so she was taken to the camp hospital. She's there now and I`m waiting to hear how she is. I`m really worried about her and our baby.

I have spent most of my life as a refugee. I grew up in another camp in Tanzania after my parents and I were forced to flee our country. I'm still not used to the conditions though and life here is difficult. Refugees never have a good life—it`s a struggle to get enough food and water and living in a tent wears you down. But it's better than living in fear at home. I can't and won't go back home—I will stay in this camp until I die." 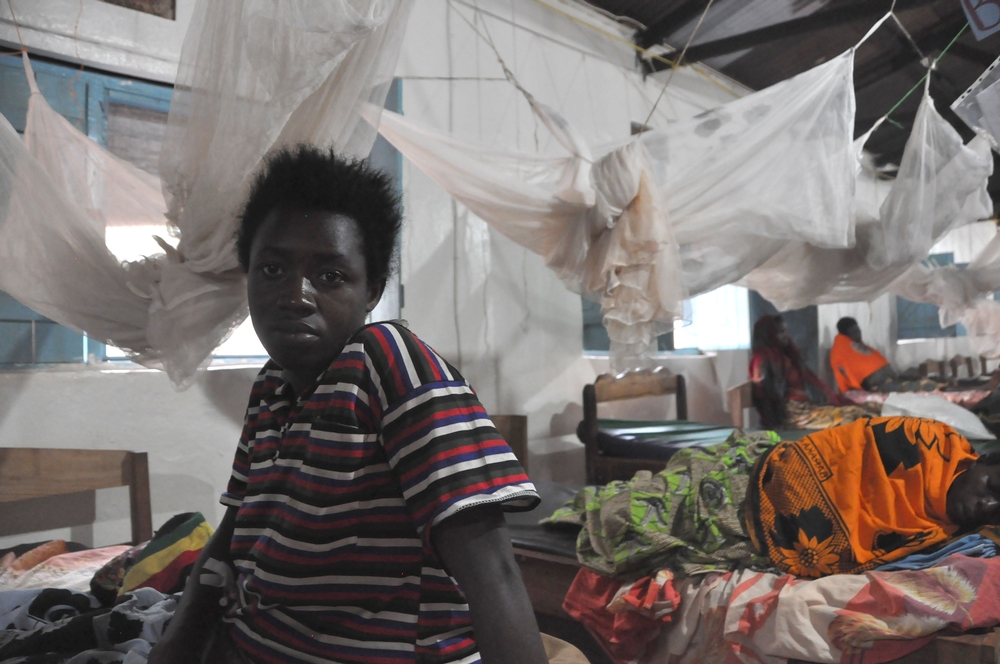 "There is a risk that I may miscarry and lose my unborn baby, who is 28 weeks old."

Mpawenayo, 22, has been living in Nduta for two months.

"When I arrived in Nduta I was given a tent, some food, some cooking utensils, and some water. It felt odd to be given these items—although I'm grateful, it makes me think of home and all the possessions that I have left behind. And despite the assistance we receive, surviving in the camp is difficult: we don't have enough food and we're always hungry.

Each day in Nduta feels like a week, and with each week that passes, my old life seems further and further away. Back home I was a student studying humanities, living a normal life, and preparing for the birth of my first child. It feels strange to think that now I am a refugee, living in a refugee camp. This is not what I expected for my life.

To make matters worse, now I am ill: I'm here in hospital because I have vertigo and awful pains in my stomach. My husband called the ambulance but it didn’t come, so we went to an MSF health post and the staff transferred me here. The doctors say I have severe malaria as well as a urinary tract infection. They've told me that there's a risk that I may miscarry and lose my unborn baby, who is 28 weeks old.

If my baby dies, I'll feel that it's my fault. I feel guilty for not being able to provide the best for my child, but it is hard for expectant mothers in the camp to look after themselves. Sitting here, I'm worried about the future. It's difficult to have any expectations anymore." 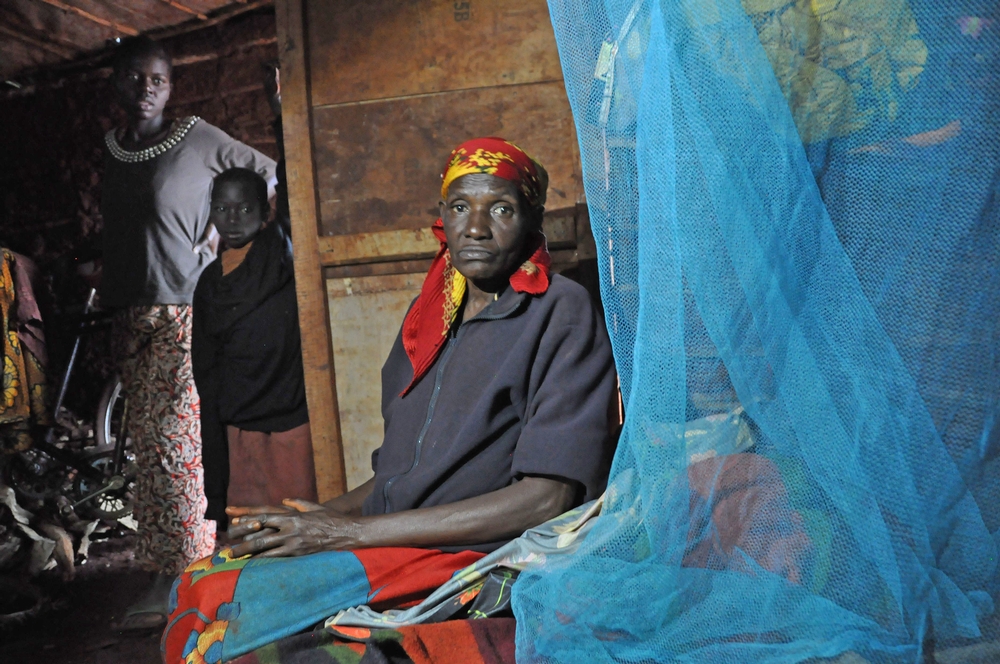 "I was feverish and could feel my heart pounding in my chest. I was so weak and shaky that my legs could barely support me."

60-year-old Theresa lives in a one-room shack in Nyarugusu Camp, which she shares with her son, his wife, and their two-year-old son.

"I've been living here for a year and a half now. Life here is very hard—it's hard to get enough food and water and the conditions we live in are very poor. It's dirty, there's dust everywhere, and it's impossible to keep anything clean. I've been ill a lot but one occasion was particularly bad—I had an awful headache, was feverish, and I could feel my heart pounding fast in my chest. I remember being so weak and shaky that my legs could barely support me. My son helped me to go to the camp hospital and the doctor diagnosed me with malaria.

Being ill made me realize how dangerous malaria is and now I'm scared of my family getting sick, especially my grandson. I know that the disease is spread by mosquitoes and so I try to protect him. Until recently, this was difficult because the mosquito net we had was torn, with big holes that the mosquitoes could get through easily. But about a month ago, MSF gave us a new net and now I sleep under it every night with my grandson. I'm so pleased to have it and I hope everyone else in this camp gets one too, so that they are protected from getting sick."