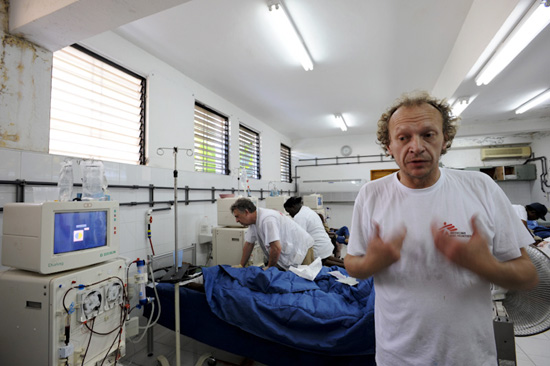 The risk of renal failure is high for survivors of Haiti’s devastating earthquake who have severely crushed limbs or dangerously infected wounds. Thus, a key component of Doctors Without Borders/Médecins Sans Frontières’s (MSF) emergency response is carried out by its team of nephrologists specializing in kidney diseases. Just after the earthquake struck, MSF sent a nine-person medical team to the Port-au-Prince General Hospital and then flew in four dialysis machines to help treat those patients in need of expert care.

On January 18, MSF put its first “crush syndrome” patient on lifesaving dialysis; a week later the team had performed more than 50 dialysis sessions. Crush syndrome is a condition in which muscle tissues damaged by severe internal injury release massive quantities of toxins into the blood, leading to kidney failure. Left untreated, crush syndrome can be fatal. Patients with septicemia, a serious life-threatening infection, are also receiving specialized care from the team at General Hospital.

Something that happens during earthquakes is wounded people are pulled from the rubble with crushed muscles and a lot of damaged tissue. Toxins come free from this damaged tissue in a leg, for example, so much that sometimes the kidney fails to remove all of this and sometimes the only solution is to give them dialysis.

Crush syndrome involves acute renal failure. At a certain moment the kidney function will usually restarts, and this can be after 24 hours, or after two days. Sometimes patients do not recover, so those people become chronic dialysis patients. For them, there is the opportunity to have a long life with dialysis.

We were very lucky because we found a dialysis center at General Hospital. It was broken down—there was no water, there was no electricity because of the earthquake. But with the MSF logisticians we could restart it in 36 hours. Once we established a renal unit and communicated it to all the other medics around town, we had an influx of patients with crush syndrome. On Monday we had the first patient and on Tuesday we already had six and yesterday we had 11. So it will continue to grow quickly.

From experiences in earthquakes in other countries, sometimes we have dialysed 300 to 400 people. At the moment, we only have 20, but this can grow very fast. That's the reason we have an outreach team, and why we have decided to send in more nephrologists, more nurses, and more equipment, because we think we will have to dialyse some patients with crush syndrome for the next few weeks, at least.

It is quite unusual that six days after the disaster you still find so many crush patients; normally you have to be as early as possible. But we saw the day before yesterday there were a lot of patients referred to our center with crush syndrome, so we think there are still a lot of patients to come.

We also actively try to detect the patients. But the most important thing we have to do is communicate to all the surgeons, all the doctors working here in Port-au-Prince. Not only MSF staff, of course, but everyone who is now working with the wounded patients, that there exists a possibility of treating renal failure.

We have a total capacity of seven machines and this means we can go up to 35 patients a day. For most of those people, dialysis is lifesaving.