A Doctors Without Borders/Médecins Sans Frontières (MSF) team managed to reach Debaltseve on February 21, three days after rebels took the eastern Ukrainian city. MSF emergency coordinator Olivier Antonin was part of the team that provided medical aid and evaluated the medical needs there. Here, he describes what he saw in the devastated city.

When we arrived in Debaltseve, we quickly saw that it had been hit hard. The bridge leading to the center of town had been damaged and we had to turn back. The town seemed deserted. It was hard to know whether people were still living in the little houses. The windows had exploded. Tree branches were split. Severed high-voltage power lines swung in the wind. Roofs stood wide open. We found a road that led toward the train tracks. To cross them, we passed through a tunnel where other signs of the war were visible—half-eaten potatoes and empty food cans littered the ground.

As we approached the center, we entered a town that did not seem deserted. There was a lot of activity in the town square. People seemed to be looking for something and wandering around. What was shocking was the haggard, stunned looks on their faces. They were so desperate they overcame the shame of asking. Politely, they asked, “Where can I find medicine?” “How can I transport my family member who is unable to move?”

The telephone system does not function. You can’t organize anything from any distance. You have to be right there on the spot. There are only three doctors left in all of Debaltseve—the head doctor from one of the town’s two hospitals and two doctors who see patients at the only medical facility. It has been improvised on the ground floor of a building on the square. We transferred boxes of drugs—supplies for treating wounded patients, for primary health care and single-use materials—along with a few loaves of bread, into another vehicle, doing so discreetly. To prevent the crowd from surging, we lined the vehicles up "popka k popke" as they say, or "bumper-to-bumper," in English. That precaution might have been unnecessary. A bit further away in the square, people waited their turn calmly at a food distribution held in a building that had been a supermarket not so long ago.

When we came back the next morning, the distribution of oil, sugar, canned food, and rice had not stopped. On subsequent days, blankets, hygiene products, candles, and plastic sheeting to seal windows were distributed. It’s cold, with mounds of snow covering the ground and temperatures below 0° Celsius. 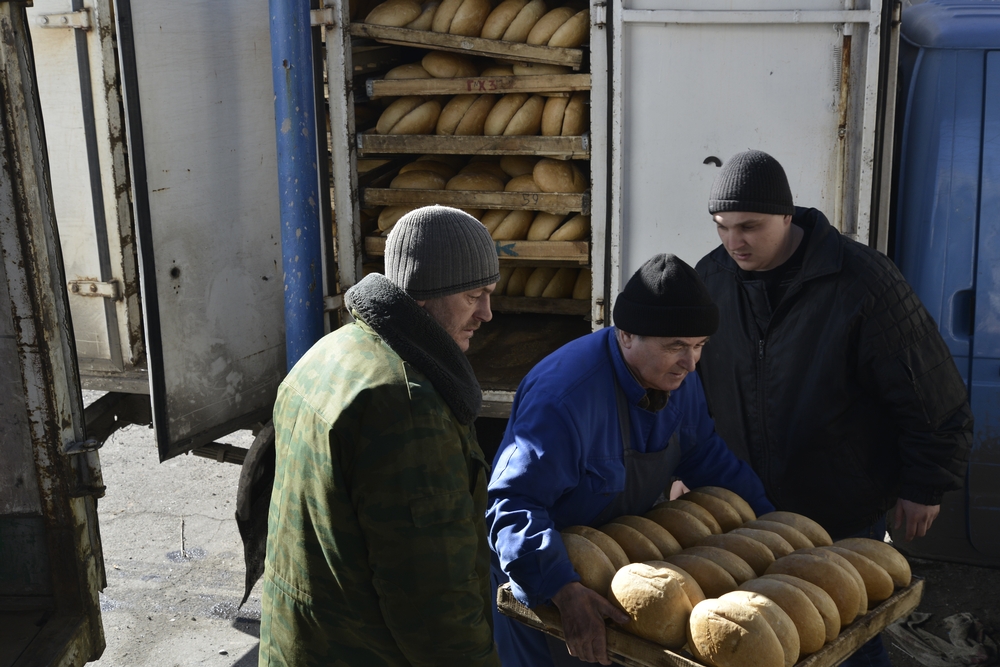 The new authorities set up a mobile kitchen in the town square to serve hot meals, where they prepare buckwheat kasha and serve hot tea. Nearby, a generator produces electricity. There, too, people are waiting calmly to recharge their cellphone or flashlight. “There’s no electricity or water,” the women tell us. “You have to fetch water from a well.”

Before the conflict, Debaltseve’s population totaled 25,000 people. How many are left in this devastated town? No one can provide precise figures, but based on the distributions, at least 5,000 remain today. They stayed through the blaze of fighting that raged for more than three weeks.”

Destruction in the street of Debaltsevo.
Olivier Antonin/MSF