Ukraine: Voices from the Front Line

View Photo Amnon Gutman
Ludmila, 66, with her husband in their home in the village of Kuteynikovo, Donetsk region, where MSF runs a mobile clinic. She says the main problem here is that drugs are not available, and if they are, they’re too expensive. The village’s doctor was moved to another town when the conflict began so the community has been without a regular doctor for months. The local pharmacy is closed because it has not been possible to get a supply of medicines since the conflict began. Residents must travel to the nearest larger town of Amvrosiyevka to purchase drugs at one of the private pharmacies, although the price of medicines has increased significantly and many people cannot afford it. Now an MSF doctor visits twice a week to provide free consultations and medicines.
Amnon Gutman
Click to hide Text

Since May 2014, Doctors Without Borders/Médecins Sans Frontières (MSF) has supported around 100 medical facilities on both sides of the front line in Ukraine with medical supplies, in addition to running an ongoing psychological support program. To address difficulties people in rural areas face accessing health care and medicines after more than ten months of conflict, MSF is also running mobile clinics in 25 locations in Donetsk and Luhansk regions.

Below are testimonies gathered from people who are feeling the impact of the conflict every moment of every day: 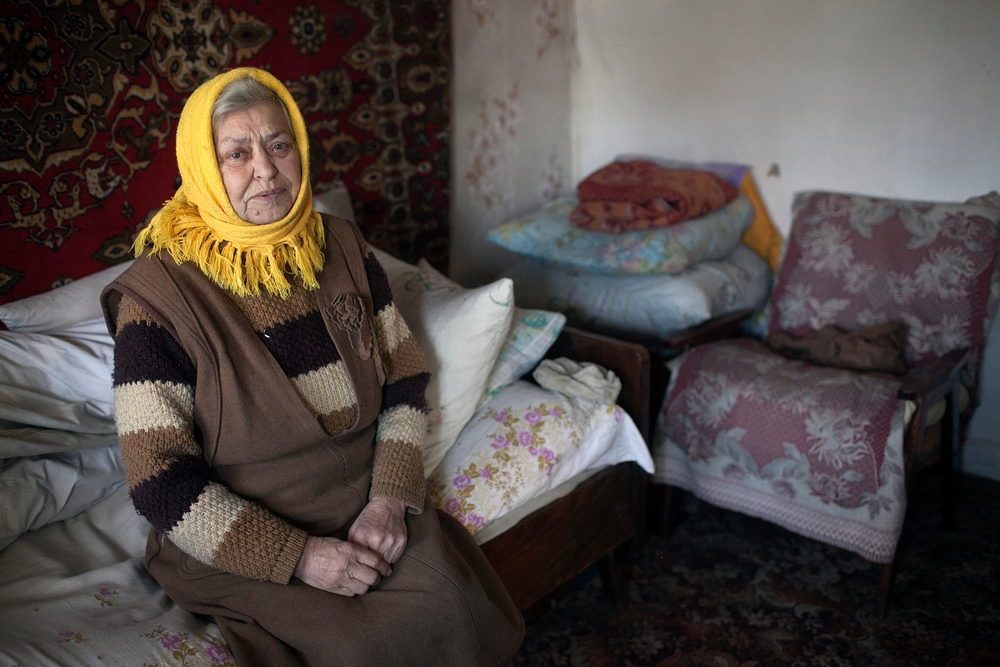 "I’ve been living in Kuteyniekovo since the 1960s. My husband died 17 years ago and I don’t have any children. I haven’t received my pension for eight months. The food in my cellar was stolen, but some people helped me by bringing some potatoes and biscuits, and I received some humanitarian aid twice. I couldn’t manage to buy coal this year, so I heat the house with some firewood.

I have many health problems: angina; and problems with my ears, sinuses, and joints. I can’t afford to buy medicines. I received some drugs I needed from MSF, but before that I lived without them. I was just using plants to treat myself.

Our village was shelled in August. Once I went down to the cellar, but the sound of the shelling was so loud I preferred just to lie on my bed instead.

I can’t leave, I’m too old. I was born here and I’m going to die here. I worked hard all my life. I’ve now experienced two wars. I have buried my husband and my baby daughter who died when she was born. Nothing good can happen here, I don’t have hope." 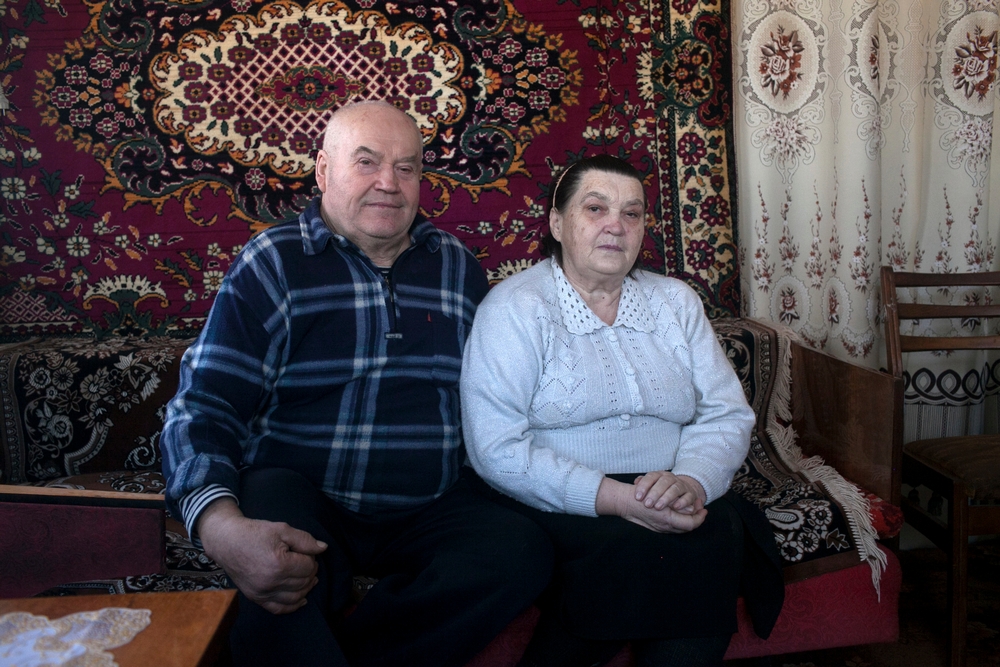 Ludmila, 66, lives with her husband in Kuteynikovo, Donetsk region, where MSF runs a mobile clinic.

"Our lives have changed a lot since the conflict started. There is no stability, we try our best to survive. The main problem is money, we don’t receive our pension. It’s impossible to get it in Donetsk now and the banks in the area are closed. The only way to receive our pension is to cross the front line and come back. Once we went to Dnepropetrovsk [about 155 miles away on the other side of the front line] to get it.

My husband had gastric cancer and had surgery five years ago. I have diabetes as well as complications with my heart, high blood pressure, and a gastric ulcer. I have enough insulin for the next month, but after that I don’t know. In December I was ill because of my diabetes. I went to Kiev and stayed with my granddaughter so I could get treatment. I spent one month there and I managed to receive my pension. But I spent it all on medical expenses.

The problem here is that drugs are not available, and if they are, they’re too expensive. The price of drugs has doubled. There was a pharmacy here where we could buy basic drugs, but it closed [because it was not possible to get supplies]. So then we had to go to Amrovsievka, Ilovaysk, or Donetsk, but to get there we need money. Besides, there hasn’t been a doctor here in Kuteyniekovo for many months." 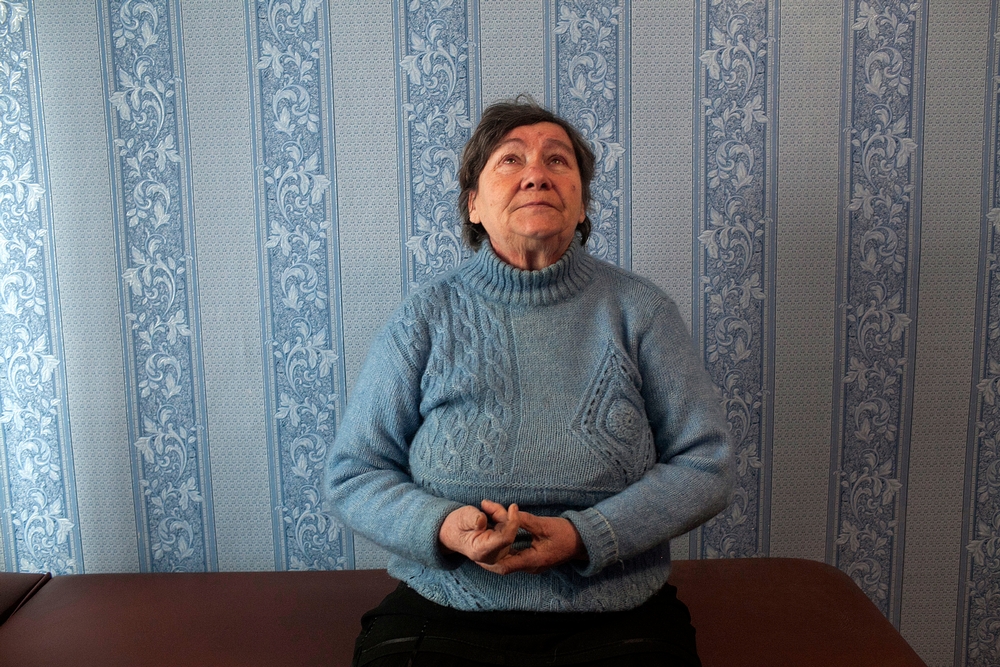 “I’ve lived here all my life. I was a storekeeper, but retired in 2009. When the conflict started many people left Uspenka, mainly to Russia. My son left too, but he came back, and now the majority of people have returned. Our village wasn’t directly hit by shelling—it was used as a base to shell other villages and the fields around [us] are mined.

The biggest problems here are unemployment and the lack of money. I stopped receiving my pension in July last year. I grow some potatoes in my yard and also have chickens so I can sell the eggs. My brother lives in Russia and sends me some money every month as well.

I have heart problems and high blood pressure. Now many people face difficulties when they need to buy drugs, as they’ve become more and more expensive since the conflict began. It’s possible to find some medicines in pharmacies, but they are too expensive now.

We haven’t had a doctor in Uspenka for many months—the previous doctor died before the conflict. So people had to go to Amvrosievka [about 14 miles away] if they needed to see a doctor. Now Dr. Wael from MSF comes here and there are long queues to see him. I’m very grateful to MSF, they help people here a lot.” 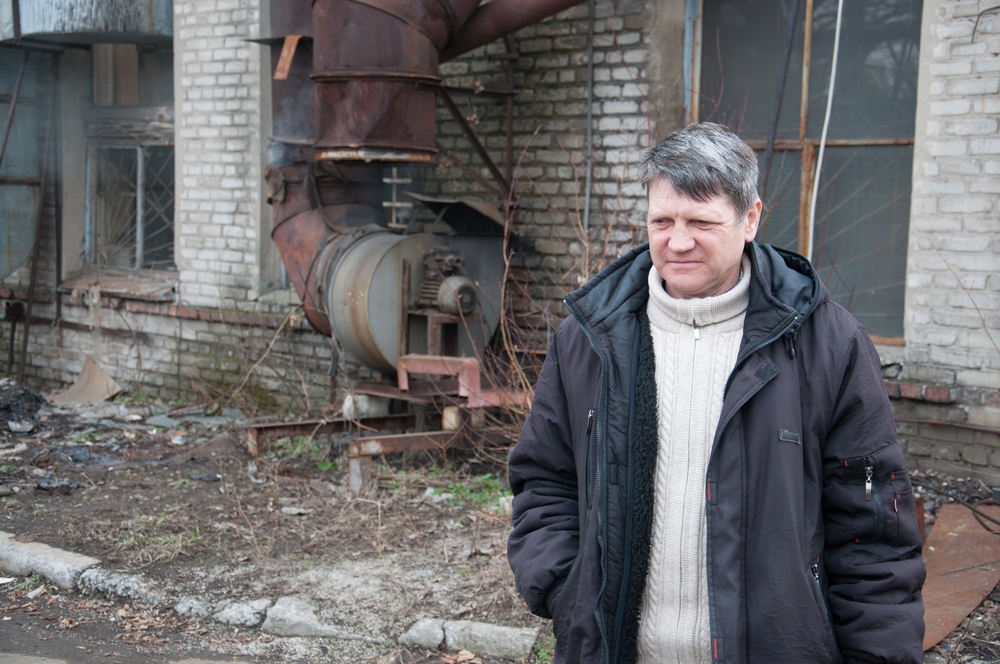 Serguei, 49, lives in Lugansk, and is a member of the Blind Association where MSF provides mental health counseling.

I contracted measles when I was eight and lost my sight. I have been living in Lugansk for 32 years. I moved here just after graduating from a special school for handicapped kids. I was doing some work making lightbulb sockets. It was a regular job, I was paid, and I also received a pension from the government. Sometimes the work was sporadic and the salary as well, but with the pension, I had everything I needed.

Now the business here is not working anymore, so I don’t get a salary. Since July, I haven’t received the pension. We received some money once in October, but that’s it. People now have to rely on humanitarian aid, but for the past months we haven’t been receiving anything because Luhansk is isolated. We now live in very difficult conditions: we have to eat the food we stored before the war, the sugar and the cereals we have. Fruit and meat are too expensive, we just buy bread and some dairy products we get at cheap prices from a local dairyman. I don’t know how long we can keep holding on.

My wife is suffering from a chemical burn she had many years before, but we can’t get the necessary medication from the local pharmacy anymore. She still has some from her stock, but only for the next six weeks." 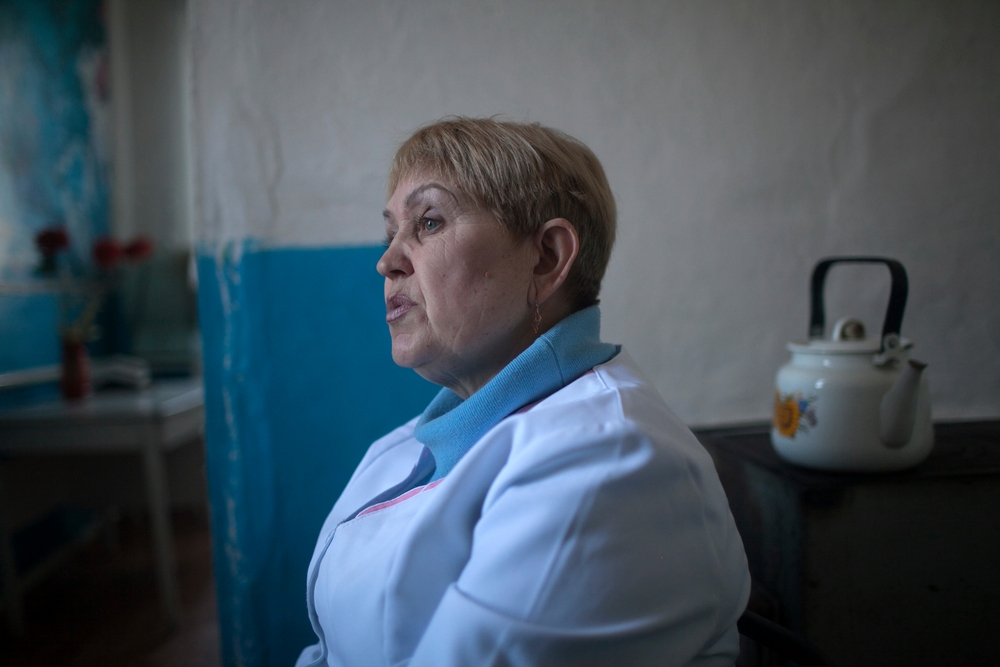 Svetlana, a nurse, works in the health center in the village of Kuteynikovo, Donetsk region, where MSF runs a mobile clinic.

“Many people left Kuteynikovo when the conflict started. The majority went to Russia. People have come back, but not everyone. Before there were 1,600 people in the village, now there’s around 1,000. There were many young people, but they’ve mostly left, so now this is a village of elderly people.

So the most common health problems here are heart disease, high blood pressure, diabetes, and problems with joints. It is very difficult for diabetic patients to get insulin. There was a pharmacy here, but it was closed because of the problems with getting supplies.

In September our village doctor was transferred to another town, Metalist, because the health center there serves more villages. He comes back once a week and now Dr. Wael from MSF comes twice a week. We’re very happy to have his help. It’s very important that the drugs are given for free because people do not have money. Businesses are not functioning, so there is a lot of unemployment and people are poor. Dr. Wael is a kind person; he’s become like a member of our family. He always comes here in a good mood and even after seeing 100 patients, he’s still smiling.

We’ve been working without salaries since the summer. We received it once in January. People often ask me why I still work without receiving any money. I just say I belong to a kind of people who do their job despite the difficulties. People here are very strong. We survived for months just from growing some vegetables in our yards. My husband was able to go to Russia to work and bring some money here.

Although our village was shelled in August, I didn’t leave. Kuteynikovo is my home, I can’t forget it. My house is here, my grandchildren. The shelling came in the morning and at night; we didn’t know when to expect the next bombs. There was no electricity, no water. It was very scary.

Now it’s quiet, but I don’t think it’s the end. People here live in constant fear that the fighting will start again. If the shelling returns, I won’t stay here. I will run from the war because it’s impossible to experience it again." 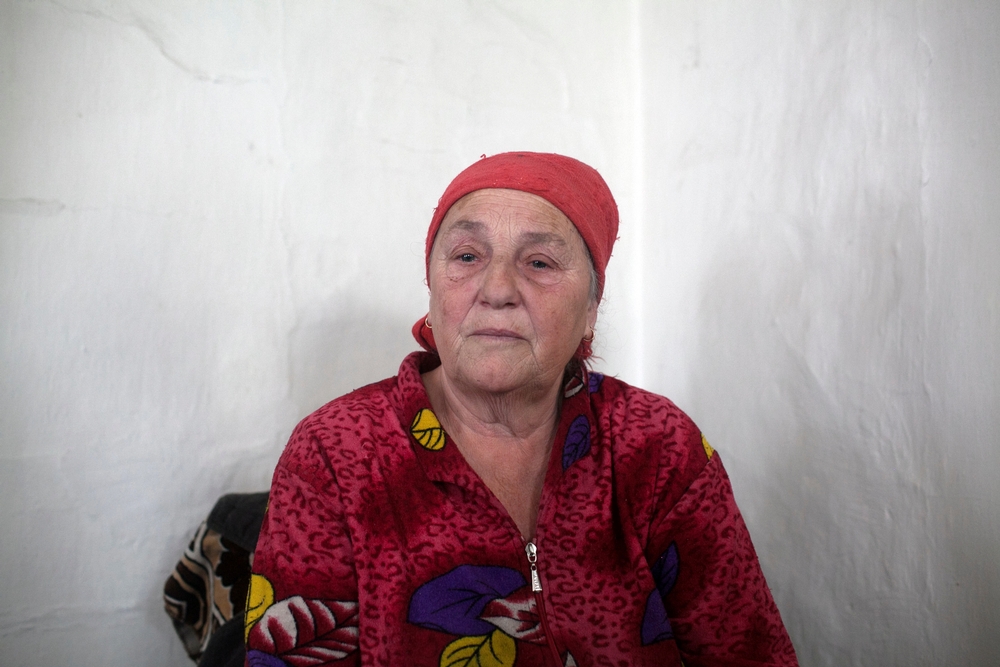 “In August our village was shelled. It felt so close. We stayed in the house, we had nowhere to run and my husband couldn’t move because he was disabled—he had no legs and was in a wheelchair. He told me I should hide in the cellar, like everyone else. But I didn’t, I couldn’t leave him. So I stayed and we lay together on the bed. We expected the worst. We were ready to die together.

We were married for 51 years. He died suddenly last month of cerebral thrombosis. He was 78. He used to sit in his wheelchair near the road and drivers would stop and give him some money, food, or cigarettes. You can see a wreath by the road where he used to sit every day. I received 1,000 UAH [about $43] in humanitarian aid in December. But I spent all my money on my husband’s funeral. A place at the cemetery costs 2,000 UAH.

I haven’t been receiving my pension for eight months, so I can’t buy medicines. I was given the drugs I needed for hypertension at the MSF clinic. I want this war to stop. What did we do wrong? We worked hard for all our lives, we paid taxes. Why is everything taken from us?”