An Urgent Mission in Syria

In late March 2012, an MSF team crossed the Turkish border into Syria in an effort to provide medical aid in the Idlib region. 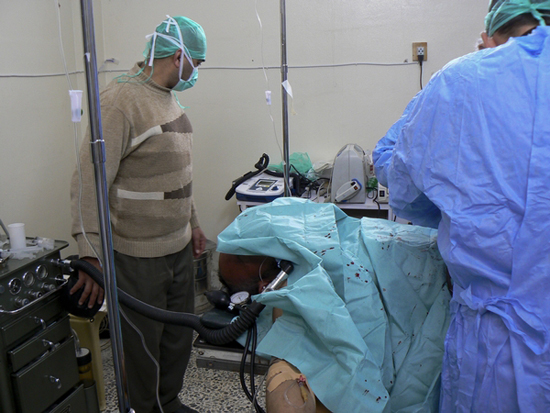 Staff performing surgery in the Idlib area of Syria, while it was still possible to do so.

In late March, an MSF team crossed the Turkish border into Syria in an effort to provide medical aid in the Idlib region. The two-person team was composed of a surgeon and an anesthesiologist. To evaluate needs, they also sought to observe the treatment that wounded patients were receiving.

Their first observation was that medical workers were so terrorized that they would offer only first aid in cases of extreme emergency. To treat broken bones, for example, they would simply use makeshift splints. In dealing with hemorrhage, they applied compression bandages even when they had access to technical resources enabling them to provide more appropriate and complete care.

"They told us that the risk was too high," the MSF surgeon explained. "We were told that, 'being caught with a patient is worse than being caught with a weapon.' A Syrian colleague also told me that that meant death both for the patient and for him."

The team also observed the targeting of hospitals and medical facilities by armed forces. In a small town that the team visited, a health center that served as an improvised hospital had been burned down. There was nowhere else to treat the wounded. Another health center, still in good repair, had only one consulting room.

In another town, the team found an actual, functioning hospital. It had a medical team, supplies and a well-equipped operating room. "We performed as many procedures as we could," the MSF surgeon said. "Then we had to leave in less than 10 minutes after being warned that the army was coming and launching an attack on the city. Later, we heard that the hospital had been severely damaged and that it has not yet resumed functioning."

Fear is ever-present. Elsewhere in Idlib region, in northern Syria, the team was greeted at a public hospital whose operating room is closed. The staff refuses to perform surgery for fear of reprisals and will thus provide only first aid services that require 10 to 20 minutes. "'If the tanks arrive, I can be warned in time,' the chief doctor explained to us. 'I can get all the patients out and remove all traces of their presence.'" (The family remains nearby and can thus move the patient quickly.)

The MSF team asked what happens if a patient is in serious condition. The Syrian doctor responded with a helpless shrug. Then he added that some patients had managed to reach Turkey.