Voice From the Field: "People Living in Dadaab are Broken" 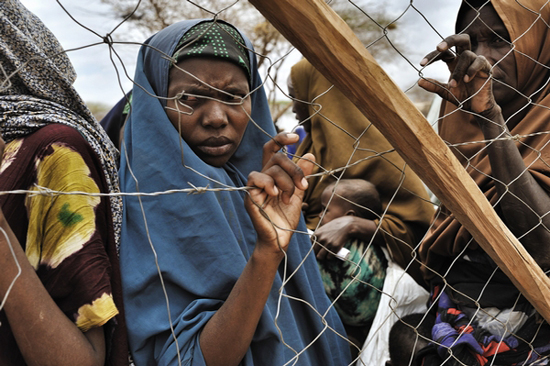 Somali refugees wait outside the MSF health post on the outskirts of Dadaab's Dagahaley camp.

Dadaab 20 Years On: Shadows of Lives

Abubakar Mohamed Mahamud has worked with Somali refugees in northeastern Kenya since the war in Somalia began more than 20 years ago. Originally a nurse specializing in nutrition, he is now Doctors Without Borders/Médecins Sans Frontières (MSF)’s deputy field coordinator.

“The crisis in Somalia is not going to end soon. History is repeating itself and this is a never-ending problem. What I see today is what I saw in 1991: desperate people who fled their war-torn country, leaving everything behind, only to end up in a camp where living conditions are below what is humanly dignified.

“I started working with Somali refugees in 1991, at Liboi refugee camp, next to the border with Somalia. MSF was responsible for the medical screening of the refugees. The living conditions were terrible. There was nothing there: no water, no toilets, and no decent infrastructure. There were several outbreaks of dysentery. MSF was running an emergency hospital and several feeding centers within the camp.”

As more and more refugees crossed the border, and the security situation got worse, three sprawling refugee camps—named after the nearby town of Dadaab—were set up 80 kilometers [about 50 miles] away in the desert, with space for 90,000 people. Today, almost half a million Somalis are struggling to survive in the camps.

“I left MSF and Dadaab for a couple of years, and came back in 1994 to work in Dagahaley [one of Dadaab’s three camps]. The situation then was totally different. It was relatively calm and stable. The refugees were getting used to their environment and finding ways to cope. There were markets, schools, and the camps looked more like a Kenyan city.

“MSF was providing primary and secondary health care in the three camps, but there were very few epidemic outbreaks [and very little] malnutrition at that time. I continued working for MSF until 2003, when the projects were handed over to other organizations.”

The period of relative stability in Dadaab came to an end in 2006, when renewed fighting in Somalia, combined with flooding, drought, and widespread hunger, caused many more people to leave their homes.

No Space for Newcomers

“When I came back to Dadaab in 2009, the situation was totally different again. The number of refugees coming to the camps was overwhelming. The camp was overcrowded and the infrastructure was the same as ten years earlier.

“Registering for food was also very slow, and it took a long time to receive the food rations provided to the refugees. Those that had families already living in the camps had to rely on their relatives to share food with them. More and more people settled outside the camps where they were left without infrastructure or protection. It was only after years of lobbying that two more camps were opened during the summer of 2011.

“At the start of 2011, we saw more and more refugees coming who were suffering from malnutrition. MSF’s existing hospital in Dagahaley camp was soon overcrowded, and we had to increase our capacity to treat the numbers of children. We also faced a measles epidemic.

“MSF is also providing mental health care to the refugees. Many are suffering from severe post-traumatic stress disorder and trauma. For the people who have lived in the camp for 20 years, the mental health program is also important. They see no chance of future improvement, and some don’t have any hope left. People living in Dadaab are broken.”

The security situation in and around the camps deteriorated dramatically in October 2011, with the kidnapping of two MSF staff members and a spate of explosions and shootings. Since then, all non-essential services in the camps have been suspended.

“MSF has continued to work in the camps with Kenyan and refugee staff, providing both primary and secondary health care to the new refugees. However, should there be an emergency situation like the 2011 malnutrition crisis, it will be very difficult to cope. The international community needs to find a solution for this desperate situation. They need to understand the complexity of the situation and the desperation in which people are living.”