"Without Freedom I Cannot Dream": An Afghan Refugee in Greece

Mitra, a 16-year-old refugee from Afghanistan, shares the story of his difficult journey from a detention center in Greece. 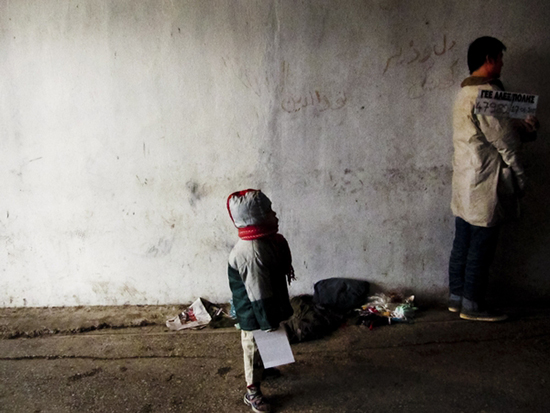 A small child from Afghanistan detained in one border police station in Evros region in 2011.

Greece has become one of the main entry points for migrants and refugees trying to reach Europe in hopes of finding a better future. The already-limited response to the medical and humanitarian needs of these people has been adversely impacted by the financial crisis affecting the country. The Greek government has also increased its law enforcement efforts to stop people before they get into the country, rendering passage through the Aegean islands—a commonly taken route—even more dangerous.

Sixteen-year-old Mitra left his native Afghanistan after his father was killed. He shared his story from a detention center in Northern Greece in Spring 2013.

“My father was working for the military,” says Mitra. “Our house was in Kunduz.” Local Taliban elements warned his father to stop working for the state; when he refused, they killed him and threatened the rest of his family.“I was also in danger,” says Mitra. “My cousin told me to leave Afghanistan. My five brothers and sisters moved with my mother at my grandfather’s house. I haven’t spoken with them lately.”

The group met up with smugglers who were paid to take them into Turkey. “We went to a place where there were 600 people waiting and we started walking together for hours,” Mitra remembers. “Walking in the mountains was difficult. The smugglers were using a wooden stick to force older people to walk faster. We reached Van and from there we traveled to Istanbul, where we stayed for two weeks.”

Next the group had to cross the Evros River, which separates Turkey from mainland Greece. “We were 25 people and there were plastic boats that we inflated and used to cross the river,” says Mitra. “Four people were boarded in each boat.” Two boats capsized and the passengers were forced to swim. Of the eight people who went into the river, only seven came out. “It was four o’clock in the morning,” says Mitra. “We couldn’t find the way. We reached a village and a resident called the police."

"They took us to a big detention center. When I was asked about my age, I said that I was 16 years old and the interpreter wrote 19. The following day I was released and I went to Athens. There I found a second Afghanistan—there were many Afghans in the city. I stayed in Athens with a friend of my cousin.” Mitra hoped to leave Greece and make his way to Italy. “I went to Ioannina, where I stayed in the fields,” he says. “Then I went to Patra—I kept sleeping in the fields and inside an abandoned factory with many other Afghans, for seven months. I wasn’t lucky, I didn’t find a way to leave Greece, so I returned to Athens.”

After a few months, Mitra tried once again to make the journey to Italy. “I went to Ioannina, I took a truck from there to Kozani, and then to Albania. But when I entered Albania the police arrested me and they took me back to the border. The Greek police arrested me and sent me to a detention center in northern Greece.”

“Without freedom I cannot dream,” says Mitra. “The police took me to a hospital for medical examinations to prove that I am a minor. They told me that they would release me but I am still here.”

Despite everything that has happened, Mitra remains hopeful. “When I get out I will relax,” he says. “Anything that is in my fate may come. I want to learn English and Greek. I want to become prime minister to change all of this.”