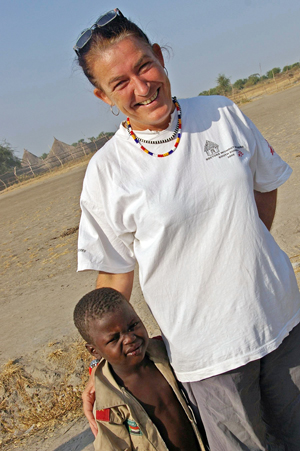 During the response to Zimbabwe’s cholera epidemic earlier this year, medical teams from Doctors Without Borders/Medecins Sans Frontieres (MSF) started to work in prisons across the country to treat cholera patients and prevent the spread of the deadly disease. As the four-month intervention is concluding, MSF’s project coordinator in Zimbabwe, Pip Millard, gives insight into the challenge of curbing an outbreak in penitentiaries.

Why did MSF start working in Zimbabwe’s prisons?
During our cholera intervention earlier in the year, we assisted a couple of prisons where prisoners fell sick with cholera. This was the first time the authorities allowed help from an international organization in the prisons. And at the beginning of the year, prisons had the worst and highest death rates in the history of the country. We found high numbers of prisoners malnourished due to the lack of food and health facilities, which had become almost non-existent. We found a complete lack of water and sanitation and many of the prisoners were walking around half-naked. The situation was dire, and with each prison we visited we found the same problems over and over again.

It became clear that the Zimbabwean prison service was overwhelmed by the situation and that the inmates were suffering as a result. The ministry of justice publicly admitted that it could not handle the food and health crisis inside the prison system. The prison system is just like the healthcare system in Zimbabwe—deprived of human and material resources, lacking sufficient funding and struggling with unmotivated staff. Previously, prison farms were self-sufficient but a lack of resources to buy much-needed items such as seeds and fertilizers have contributed to a food security crisis, not only in these prison farms but also in the prisons and hospitals they were sustaining. Many of the rural areas are dependent on food aid, but prisons have been neglected by aid agencies and prisoners have had to rely on family members or the bare minimum food from the prison in order to survive.

But when needs are high all over the country, why focus on prisons?

As a humanitarian organization our mandate is to help the people that need our assistance the most. The prison population is definitely an extremely vulnerable group as they are usually last on society’s priority list. Also, when people “outside” are struggling, some of them have at least a chance of developing coping mechanisms. When there is no food in the stores, for instance, they can try to find it at local markets, move across the border, or build up networks to help one another. In a prison, that is not possible. When there is no food, you starve. When there is a cholera outbreak and there is no treatment, you die.

What has changed since MSF started its intervention in July?
A lot has changed for the better since we first set foot in a Zimbabwean prison in February 2009. The number of prisoners in our nutrition program has reduced dramatically. We have treated and cured many inmates, provided medical supplies, blankets, plates, and cups as well as disinfectant and containers for water and food storage. In all of this, we have been working closely with the medical staff of the prisons, providing training, support and supplies. Now they are better prepared to manage the nutrition programs independently.

In the prisons we have assisted, everyone now has access to clean water, including the prison officers. We have installed water tanks, fixed plumbing and constructed latrines and wells. The prisons are generally much cleaner, although problems such as lice and rats still persist. The morale of the prisoners and prison officers has also improved, as has the relationship between the two. Despite this good news, however, the crisis is not over. There still remains a food shortage within the Zimbabwe Prison Service due to lack of funds, and we are approaching the hunger season as the year’s harvest begins to run out.

Has the government done anything to improve the situation?
There was a presidential amnesty in September. Reportedly, 2,513 prisoners were released across the country to ease the desperate overcrowding. Since then, however, we have witnessed the prisons we are working in quickly fill up again. One reason for this is that prior to their release there is no rehabilitation, as there are just no resources available. Another reason is that the economic crisis “outside” leaves many no other choice but to resort to crime.

The overall situation in Zimbabwe remains extremely difficult for prisoners and ex-prisoners alike. When inmates are released, there is no financial support for food or bus fares home. Two prisoners from one of the prisons where we are working were behind bars again after 72 hours, after stealing US$2 from a schoolboy. Another man, a 21-year-old who had been in prison for five years, was released. His home was 185 miles away. He walked six miles down the road and then turned back to the prison feeling very despondent as he didn’t know what to do. He hadn’t received a single visitor during his entire prison term and said his father would not even know whether he was alive or not. We took him to the bus stop, gave him his fare and some food and hoped he arrived home safely.

Is MSF the only NGO assisting in Zimbabwe’s prisons and what is the way forward after the intervention ends?
Now, other international organizations, particularly the International Committee of the Red Cross (ICRC), as well as local NGOs and church groups, are assisting in prisons throughout the country–some with similar nutrition and water and sanitation programs, others with small donations such as medical supplies or food.

By mid-December our current programs will come to an end as we were able to achieve significant progress in the prisons where we worked. However, MSF will continue to monitor the situation of the prisoners and is ready to intervene where necessary.