Afghanistan: A Family Caught in the Conflict

A family in Helmand is driven to MSF's Boost Hospital after being stalked by danger and violence on the roads and at home. 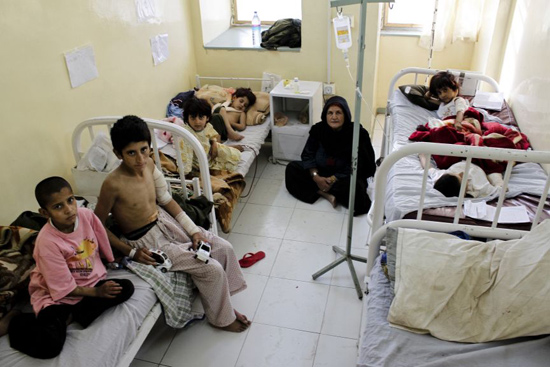 Grandmother Reda and her six grandchildren, who were wounded when a shell exploded near their home, sitting at Boost Hospital in Lashkargah.

Most of the people crowding the inpatient department at Boost Hospital in Lashkargah, the capital of Afghanistan's Helmand province, have been affected by the ongoing war in Helmand. In one room, a grandmother named Reda* sits cross-legged on the floor, surrounded by six of her grandchildren, including 14-year-old Abdul, whose abdomen was pierced by a piece of an exploding shell.

They’re from Nad Ali district, an hour north of Lashkargah. Reda, along with the children's uncle, Ali, has been tending to the young ones for the last four days, while at the same time worrying about the fate of their father. In their own words, this is their story.

Reda:  Last night, they came to our village with their guns. They took over the mosque; they took over the roof of every house. They harassed us the next morning as we went to the mosque to pray. We have a really big family; I live with my sons, their wives and children. We all live together in the same house.

Ali: That same morning one of my brother’s children woke up sick, so he went to take him to a doctor. On the way there, they were told to turn back because the road was full of landmines. Even though the little boy was still sick, they had no choice. They had to come home.

Reda: All morning we could hear bullets flying past really close to the house. Suddenly the shooting stopped and there was complete silence. The women stayed inside, and the men and children started to move outside.

Abdul: I was sitting on the window sill outside, and my father was lying down. My little nephew, Zabiullah, was sitting next to me. The thing was impossible to see or hear. It came so quickly. I only saw an airplane flying over and then suddenly, this thing—they call it Hawan here—exploded in our garden in front of us. I remember seeing a piece of shell fly into Zabi’s head. He died instantly, blood everywhere.

Reda: Three of my grandchildren were killed: two boys, five and six years old and one girl, Haifa, who was eleven. The mothers were safe because they stayed inside. Nine other members of the family were wounded, but the children’s father was in a very bad state. He’s still in another hospital getting treatment, but we don’t have any news of him so far.

Abdul:  We heard that our house wasn’t totally destroyed, but we haven’t been back yet. Every day people tell us there’s shooting, more trouble in our village. We can’t go back but we can’t stay here in Boost hospital forever either.

Ali: Landmines and fighting control our lives. If there were no mines, if they stopped fighting, it would be easier. My brother couldn’t take his son to the doctor because of landmines, but then they were both killed at home.

*All names have been changed to protect the anonymity of the patients.

MSF chooses to rely solely on private donations for its work in Afghanistan, and does not accept funding from any government. In 2011, MSF will extend its work to other conflict affected provinces.