Afghanistan: "Health Needs Will Only Increase"

One year after MSF returned to Afghanistan, Country Representative Michiel Hofman talks about choices, challenges, and the way forward for MSF in the country. 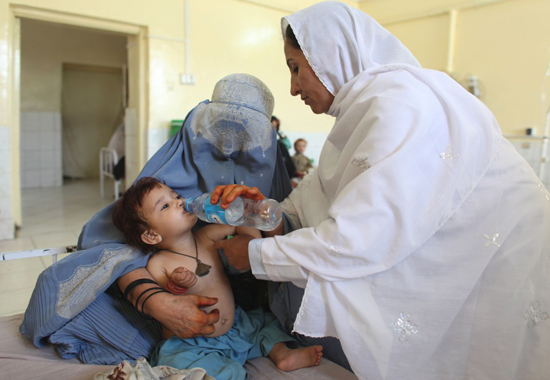 An Afghan nurse helps rehydrate a young patient suffering from diarrhea in the pediatric ward at Boost Hospital in Lashkargah, the capital of Helmand province.

One year after Doctors Without Borders/Médecins Sans Frontières (MSF) returned to Afghanistan, Country Representative Michiel Hofman talks about choices, challenges, and the way forward for MSF in the country.

MSF returned to Afghanistan in mid-2009, after an absence of five years that began when five members of its team were killed in 2004. What was MSF’s assessment of the current situation, and how has it shaped its medical response?

In Afghanistan, as in most conflict situations, the assumption is that insecurity will have an adverse effect on people’s health and on the availability of critical health services. So our first focus was on the regions where the fighting was most intense and prolonged.

In situations of war, as in Afghanistan, it’s difficult—and sometimes impossible—to get any reliable health information. But it quickly became apparent that in the most conflict-hit regions the usual effects were indeed visible. Many rural health clinics were now dysfunctional, as qualified health staff had left the insecure areas, and the supply of drugs and medical materials had become difficult. It had also become problematic for people to reach secondary care facilities, as the insecurity was preventing many Afghans from traveling freely.

As this breakdown of essential health care is bound to grow more pronounced the longer the conflict goes on, MSF decided to concentrate on the most intense regions of conflict and also to focus on secondary care—such as surgery and maternal healthcare—as this is where the most critical lifesaving medical care is provided.

For MSF to gain access to the areas where it now works, it was essential to get agreement from the relevant parties to the conflict. Why was this both a pragmatic and a principled choice for MSF?

MSF chooses, out of principle, to work completely impartially, meaning all our choices are based on the needs of the patients—a principle which is enshrined in both International Humanitarian Law and medical ethics. In conflict zones, strict neutrality needs to be observed in order for patients to trust that the care they receive is only determined by their medical needs, without any political or military agenda behind it. This means that all warring parties must agree not to interfere with the medical choices, the patients, or the staff, and must agree not to target our health facilities. In return, MSF promises that its resources will not be used to benefit the military effort of any of the warring parties.

This is a pragmatic arrangement, based on direct negotiations with all belligerents, to ensure impartiality in conflict zones. In Afghanistan, warring parties include the Afghan army and police, the American army, the British army in Helmand, the German army in Kunduz, and various opposition groups such as the Taliban. It is crucial to ensure MSF interacts with all these armed groups in exactly the same way.

This is possible because of MSF’s independence, especially with regards to funding, which puts us in the position of being able to refuse money from any government. With so many governments involved in the war in Afghanistan, this complete financial independence is vital in ensuring MSF’s neutrality is accepted.

MSF has a "no weapons" policy in the health facilities in which it works. Is this unusual in a context like Afghanistan, and why is it so important?

A strict ‘no weapons’ policy is the most visible outcome of our agreements with all warring parties. For the safety of patients, it is crucial that no armed people are in or near the hospitals, as the presence of anyone who is armed means the facility becomes a target of war.

In most conflict situations, this principle is clearly understood, and a ‘no weapons’ policy in hospitals and health centers is well established as an integral part of providing health care in conflict zones. Afghanistan is unusual in that this was the first conflict setting where I had witnessed a large presence of armed people actually inside the health facilities. This included international forces, private security guards, local police, local army, and other unidentified armed people. In a situation like this, it is impossible to ask the warring parties to refrain from attacking the hospital.

What have been the main challenges for MSF in implementing activities over the past year?

The main difficulty has been re-establishing an MSF infrastructure in Afghanistan from which to implement programs. To work anywhere, you need a solid base of staff and supplies, and as MSF had closed everything down when we left in 2004, we needed to start again from the beginning. At the same time, our first assessments showed clear needs, so the inevitable delays in providing the health care which was so clearly lacking were very frustrating. There are many other ongoing difficulties, but these are part and parcel of working in a conflict zone: the restrictions imposed by the security situation, the many different warring parties that need to agree with your medical action, the political uncertainty which leads to a great deal of corruption, and irrational bureaucracy that really hinders getting medical supplies into the country. All of these factors make for a complex mix of challenges.

What are some of the obstacles people face when trying to reach health facilities like Boost, Helmand’s provincial hospital? and how does MSF plan to respond?

From anecdotal evidence, mainly from patients telling us their stories, it seems that the biggest barrier for people from this region is insecurity. To travel even a short distance can be both hazardous and expensive, as transport costs increase with insecurity. Other factors are that the hospital’s services are either unknown or mistrusted, meaning people prefer to go to private clinics, or else to Pakistan. Once MSF has a better idea of the main barriers that prevent people from accessing health care in the most critical regions, we intend to invest more in early detection and safe referral systems. Early detection is a crucial component, as even those people who manage to make it to the hospital often arrive too late, having decided to risk the journey only when the health situation of their relative has become desperate.

MSF is working in Ahmed Shah Baba hospital on the eastern outskirts of Kabul. Why choose this relatively stable urban center to provide health care?

The population in Kabul has increased dramatically over the past 10 years, from around one million people to anything between three and five million today. This is definitely related to the insecurity, as there are many displaced people and returnees from the Afghan refugee camps in Pakistan and Iran, as well as people who have come to the capital for economic reasons.

In Kabul, we also found what is often referred to as the "humanitarian circus," meaning some 1,800 non-governmental organizations (NGOs) and a quantity of UN agencies. Despite all these aid workers, very little assistance was being given to the population of Kabul. This seems to have been a consequence of the "counter-insurgency" logic, whereby aid that traditionally comes from Western nations follows the military logic of the Western troops. The result is that aid money from any given country tends to go where their troops are based. Kabul does not have a large presence of Western troops, as it is not the focus of the conflict. As a result, NGOs and UN agencies, most of whom depend on funds from the West, do not have the finances to implement programs for the people here. This is why MSF decided to work in Kabul, in order to address the needs of the most vulnerable groups, such as displaced people and returnees.

In the last year, areas previously untouched by conflict are now becoming unstable and violent. Has this had any effect on MSF’s work?

We returned to Afghanistan so as to focus on the areas of conflict. The fact that the war has now spread to most parts of the country means that health needs will only increase, as will the need for our presence. In 2009, we concentrated on the south and east of Afghanistan, as most northern and western regions were less affected by insecurity. Now we need to look at many more places for MSF to work.

Starting medical activities in new places can be complicated. In order to safeguard our impartiality and to protect our national staff from the pressures that they may face from the communities and warring parties, we need to have expatriate staff on the ground. This requires explicit agreements with all warring parties, which take time. As 2010 draws to a close, we have a small team in Kunduz province who are negotiating the possibility of an MSF health project in the area.

MSF chooses to rely solely on private donations for its work in Afghanistan, and does not accept funding from any government. In 2011, MSF will extend its medical work to other conflict affected provinces.