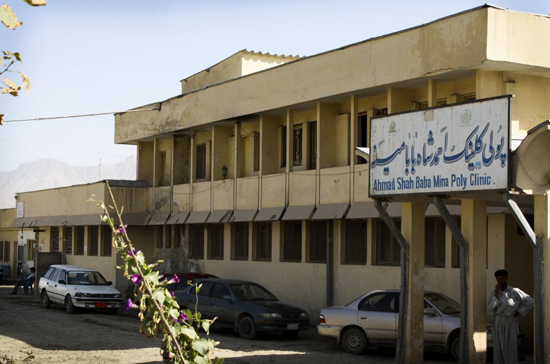 By 11:30am most patients in Ahmed Shah Baba hospital, in eastern Kabul, have been seen. They arrive early in the morning, receive their consultations and treatment, and return home before the hottest part of the day begins. Just before the staff take their lunch break, there is one patient left in the emergency room, and two pregnant women in the maternity ward. Only the vaccination room and its waiting area are still bustling with women in bright blue burkas and their young children. The register shows that the staff have already vaccinated 150 children today.

"We can only conclude that things are getting worse. Insecurity is increasing, health care is faltering. And as always, it’s the ordinary people who pay the price."

Ahmed Shah Baba is a sprawling neighborhood, and it’s growing fast. When MSF stopped working here in 2004, its population was approximately 80,000. Today nobody knows, but even the most conservative commentators estimate that the figure has doubled or tripled. People come from Jalalabad, and even refugees are returning from across the border in Pakistan. Most hope to find work in Kabul, where foreign aid is pouring into Afghanistan, but many are disappointed and find high jobless rates.

Working in the emergency room sheds light on these problems. The doctors on duty explain that they see many people with injuries. A fair number are the result of road accidents, as Ahmed Shah Baba lies between the two very busy roads that connect Kabul and Jalalabad. But an equally large number of injuries stem from fighting—mainly knife wounds but also the occasional bullet—over land or because people simply cannot deal with being without work.

MSF is helping make the clinic - gradually developing as a district hospital - into a fully functional emergency unit. Until today, many patients requiring emergency care needed to be transported to other health centers, at least one hour away. MSF will boost the current facilities, add an operating theater and an in-patient department where people stay overnight under medical observation, and generally work to improve the quality of care provided and drugs administered.

The support is just starting. Yesterday was the first time an MSF doctor diagnosed and treated a patient. The woman had come in with burns all over her face, arms, and legs after a gas cooker exploded in her kitchen. An MSF physician was the only female doctor present and therefore the only person who could check under the woman’s burka. She dressed severe burns across the woman’s chest. Today, an MSF nurse was called in to assist with a delivery, and the birth of a healthy girl went smoothly.

“We are absolutely not planning to jump in and take over. It is amazing to see how the clinic has continued functioning without support,” says MSF Project Coordinator Sylvie Kaczmarczyk, referring to the withdrawal three months ago of an NGO that had managed the hospital since MSF’s previous involvement had ended. “We are starting with repairs to some of the building and construction of new areas, so that in the future the hospital will also have all the facilities needed for a range of emergency medical care and function fully as a district hospital.”

No guns, no fees allowed

A ‘no weapons allowed’ policy is in effect in the hospital. This morning a policeman was in the emergency ward carrying his gun and had to be informed of the policy by Dr. Sattar, the hospital director. Today nine guards are receiving their first training, including instructions on how to convince all visitors to leave weapons behind at the entrance. “That rule applies to policemen and military, but equally to members of ISAF,” explains Kaczmarczyk, referring to the International Security Assistance Force in Afghanistan.

Another priority is to ensure that nobody is paying for consultations or treatment. Dr. Sattar proudly points at a new sign at the entrance of the delivery ward. It reads, “No one is allowed to give presents or offer payment to the staff of the clinic. If someone sees this happen, please call the director of Ahmed Shah Baba hospital.”

MSF’s return to Afghanistan is important, concludes Kaczmarczyk. “At first glance, this is just a good MSF project—in an area of rapid urbanization with services that cannot keep up and where the population faces general difficulties accessing medical care—but that does not necessarily make it specific for Afghanistan. What is crucial is that we use our presence here to get a clearer view of what is happening in the country. From the bit that we know today, we can only conclude that things are getting worse. Insecurity is increasing, health care is faltering. And as always, it’s the ordinary people who pay the price.”

The support to Ahmed Shah Baba hospital marks the return of MSF to Afghanistan after five years of absence, following the murder of five colleagues in 2004.

Within weeks, MSF will also start boosting the hospital in Lashkargah, the capital of Helmand province which is at the heart of the fighting between ISAF forces and the Afghan army on the one hand and the armed opposition on the other.