MSF is tackling child malnutrition in the conflict-ravaged Afghan province of Helmand. 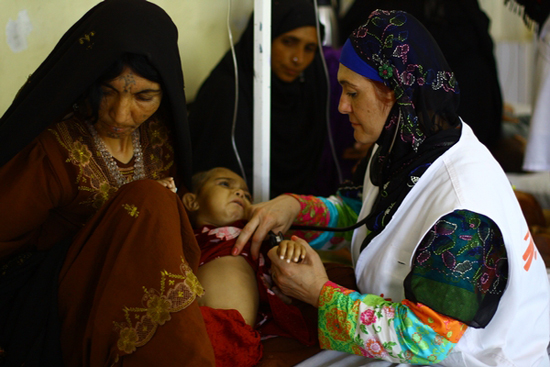 An MSF staff member examines a child for malnutrition at Boost hospital.

“She was vomiting and had diarrhoea, and she kept losing weight,” says Mariam of her five-month-old granddaughter Nazia. “Her mother just didn’t have enough milk to feed her. We went to a private clinic but they couldn’t help us, and finally we drove here from our home district of Sangin. Nazia is feeling a little better now.”

Nazia, who still has a distended belly and a clearly visible rib cage, is one of the patients in the Doctors Without Borders/Médecins Sans Frontières (MSF) therapeutic feeding center in Boost hospital in Lashkargah, the capital of Afghanistan’s Helmand province.

Boost hospital, where MSF has been working since 2009, is one of only two hospitals in all of southern Afghanistan. Helmand is one of the country’s most war-ravaged provinces, and has seen intense fighting over the past decades. It is home to a largely poor, rural population, even if there are signs of a growing middle class in Lashkargah.

MSF opened its feeding center in December 2011 to tackle the chronic problem of malnutrition among children in Helmand. This specialized unit helps children on the verge of starvation gain weight through assisted feeding.

“Some children weigh as little as two kilos [about 4.5 pounds] when they first come in,” says Christwish Wenyika, nurse supervisor of the feeding center and pediatric ward at Boost hospital. “Malnutrition is one of the main causes of death among children under five years of age here in Helmand.”

Seven months after opening, the 22 beds of the feeding center are full. About 15 new children arrive every week—some less than a month old.

Malnutrition is a big problem in southern Afghanistan, and one of the main reasons for this is poverty. Even when there is food for sale in the markets, many families—particularly large ones—often cannot afford to buy what they need. Because of this, many mothers cannot produce enough milk to feed their babies.

“It is heartbreaking to see the condition some of the children are in because their mothers don’t have enough to eat,” says Christwish. “We start with assisted feeding immediately, as soon as they arrive. The different supplements provide vital nutrients that the children are missing.”

Another contributing factor is a lack of education. Many mothers have never been taught how best to position their babies while breastfeeding, which means that not enough milk is produced. It is a vicious cycle, as the less a baby breastfeeds, the less milk the mother produces.

Cultural factors also play a part. “In some communities there is a belief that breastfeeding leads to ageing, for example,” says Assadulah Muhamad Amim, an MSF nurse supervisor. “We are working very hard at not just treating the children, but also at teaching families and communities through health education.”

Most children stay between one and three weeks in the feeding center, by which time they are well enough to be discharged.

“I’ll never forget one woman who came in with newborn triplets,” says Assadulah. “[She] came from Marjah, a district close to Lashkargah, and was very attentive to her children, but at the same time realized she couldn’t feed them all. She and the triplets ended up staying 20 days in the hospital, and it was incredible to see how healthy they were when they left. They still come back every two weeks for checkups.”

All patient names in this article have been changed.