After 24 Years of Independent Aid to the Afghan People Doctors Without Borders Withdraws from Afghanistan Following Killings, Threats, and Insecurity 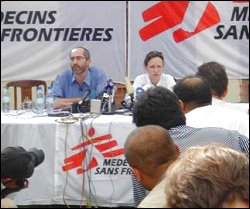 At a press conference in Kabul, Kenny Gluck, MSF Director of Operations and Marine Buissonnière, Secretary General of MSF announced MSF's closure of all programs in Afghanistan.

Kabul, 28 July 2004 - With a deep feeling of sadness and anger, the international medical humanitarian organization Doctors Without Borders/Médecins Sans Frontières (MSF) announces today the closure of all medical programs in Afghanistan. MSF is taking this decision in the aftermath of the killing of five MSF aid workers in a deliberate attack on June 2, 2004, when a clearly marked MSF vehicle was ambushed in the northwestern province of Badghis. Five of our colleagues were mercilessly shot in the attack. This targeted killing of five of its aid workers is unprecedented in the history of MSF, which has been delivering medical humanitarian assistance in some of the most violent conflicts around the world over the last 30 years.

Although government officials have presented MSF with credible evidence that local commanders conducted the attack, they have neither detained nor publicly called for their arrest. The lack of government response to the killings represents a failure of responsibility and an inadequate commitment to the safety of aid workers on its soil.

In addition, following the assassinations, a Taliban spokesperson claimed responsibility for the murders and stated later that organizations like MSF work for American interests, are therefore targets, and would be at risk of further attacks. This false accusation is particularly unjustified as MSF honors the separation of aid from political motives as a founding principle. The sole aim of the organization is to provide assistance to populations in distress in the name of medical ethics and solely based on their needs. This threat undeniably constitutes a refusal by the Taliban to accept independent and impartial humanitarian action.

Over the last 24 years, MSF has continued to provide health care throughout difficult periods of Afghanistan's history, regardless of the political party or military group in power. "After having worked nearly without interruption alongside the most vulnerable Afghan people since 1980, it is with outrage and bitterness that we take the decision to abandon them. But we simply cannot sacrifice the security of our volunteers while warring parties seek to target and kill humanitarian workers. Ultimately it is the sick and destitute that suffer," said Marine Buissonnière, Secretary General of MSF.

The violence directed against humanitarian aid workers has come in a context in which the United States-backed coalition has consistently sought to use humanitarian aid to build support for its military and political ambitions. MSF denounces the coalition's attempts to co-opt humanitarian aid and use it to "win hearts and minds." By doing so, providing aid is no longer seen as an impartial and neutral act, endangering the lives of humanitarian volunteers and jeopardizing the aid to people in need. Only recently, on May 12, 2004, MSF publicly condemned the distribution of leaflets by the coalition forces in southern Afghanistan in which the population was informed that providing information about the Taliban and al Qaeda was necessary if they wanted the delivery of aid to continue.

Humanitarian assistance is only possible when armed actors respect the safety of humanitarian workers, more than 30 of whom have been killed in Afghanistan since the beginning of 2003. The killing of our colleagues, the government's failure to arrest the culprits, and the false allegations by the Taliban have regrettably made it impossible for MSF to continue providing assistance to the Afghan people.

Until the assassinations, MSF provided health care in 13 provinces with 80 international volunteers and 1,400 Afghan staff. Our projects included the provision of basic and hospital level health care as well as tuberculosis treatment and programs to reduce maternal mortality. In the coming weeks, MSF will complete the hand over of its programs to the Ministry of Health and other organizations. As MSF leaves Afghanistan, we mourn the loss of our five colleagues. At the same time MSF takes this decision with great sadness for the people we will fail to assist.