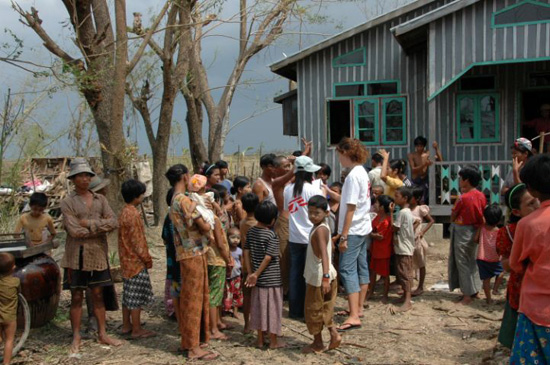 With an international conference of donor governments meeting over the weekend in Yangon, Myanmar, Doctors Without Borders/Médecins Sans Frontières (MSF) Emergency Coordinator Jean-Sebastien Matte describes the needs that remain more than three weeks after Cyclone Nargis struck the country.

"Yesterday, our teams who are traveling by boat to reach the most isolated areas, managed to reach further villages around the Bogaley area. In these villages we found people who had had run out of food and who had not eaten in three days. They were crying and begging for food."

Apparently the Myanmar authorities have now declared that all international experts will be allowed in the country.

Since the cyclone struck, three weeks ago, MSF has been trying to get more international aid workers into the Delta, particularly those with expertise in emergency situations. The aid assistance that has been brought into Myanmar to date still remains significantly below what is needed for the cyclone survivors. The overall aid effort has been considerably hampered by the lack of international staff on the ground.

Now, hopefully, MSF will be able to bring more international emergency experts into Myanmar - most urgently to the Delta region, the worst-affected area. However, in the coming few days we will see if this new declaration by the authorities becomes a reality followed by action.

Yesterday, before the declaration, the authorities refused 5 MSF visas. To date, less than ten MSF international emergency workers have been given permission to work in 4 locations in the Delta area. Currently we have more than 20 staff in Yangon waiting to get to the Delta region. These aid workers are needed to accelerate the pace of our relief effort and to support the life-saving work being carried out by the national Myanmar staff over the last 3 weeks.

Is this still an emergency situation for those affected by the cyclone?

Yes, it is of course a serious emergency for all those who have not yet received any help in the three weeks since the cyclone struck. Thousands of people have not seen any aid workers and still have not received any assistance. Yesterday, our teams who are traveling by boat to reach the most isolated areas, managed to reach further villages around the Bogaley area. In these villages we found people who had had run out of food and who had not eaten in three days. They were crying and begging for food. We were able to distribute some emergency food rations. However, unfortunately, there are many more villages like this with people in desperate need.

Normally, in a situation like this, MSF would send in a lot more international staff with experience in emergency response to natural disasters. As a result of the inability to bring all our international staff we needed into the country, three weeks after Cyclone Nargis struck the Irrawaddy delta, our aid deployment looks like we have only been on the ground for seven days.

Despite the huge effort and commitment of our national staff, we clearly lack the expertise and experience of our international teams. Aid could be delivered much faster if they were present.

What is the medical situation on the ground?

The most immediate needs are for food and shelter items. Much more food is needed. Our initial stocks of basic relief materials, such as jerry cans and plastic sheeting are almost completely depleted. So, MSF is now planning to send in additional cargo planes with vital supplies

People also urgently need shelter as it rains heavily each day. Our teams on the ground are seeing lots of respiratory infections because people either have no shelter and are in the wild or they are gathering in pagodas, monasteries, and some schools whenever they can find them. So far, our teams are coming across a few cases of diarrhea each day, so we haven’t seen any serious outbreaks of disease. However, we are really just crossing our fingers and hoping that an outbreak doesn’t happen.

Are you managing to deliver aid directly to the affected-populations in Myanmar, despite the restrictions to the numbers of international staff that were allowed in?

In the first phase of our aid operations, our sole focus was obviously to get urgent supplies and medical care to those most affected by the cyclone. All the aid MSF has brought into Myanmar is controlled by MSF, from arrival in the country to distribution to the cyclone survivors. To do this we relied, and continue to rely, heavily upon our national staff - most of whom have worked for many years with MSF in Myanmar and many of whom are in senior management positions.

These national staff have done, and continue to do, vital work. We are confident of the integrity with which our teams have carried out their work to help those affected by the cyclone and of the services these MSF teams managed to supply on the ground.

We are in constant contact with these MSF teams who tell us of their progress and the challenges they face. Obviously, in a situation like this, the delivery of aid can be complicated. We are aware of a couple of instances when we lost partial control over our distributions of aid, but were able to amend this.

For instance, in one village the military insisted that they were in charge of distributing the rice. However, a senior MSF Myanmar doctor intervened and the military allowed us to distribute our own rice to those who were in need. On another occasion our team was simply not large enough to simultaneously carry out medical consultations, water and sanitation in addition to food distributions. So we gave a number of bags of rice to a local village committee to distribute themselves. Thankfully these instances represent a very small fraction of total aid distributions and local MSF teams were able to correct them.

Since the cyclone struck, MSF has more than 250 staff on the ground in the Delta, with a total of 33 medical teams. An average of 500 medical consultations are carried out on a daily basis and to date MSF teams have reached approximately 120,000 people and have distributed at least 310 metric tons of rice, more than 84,000 cans of fish, 16,500 liters of cooking oil, and 13,500 plastic sheets in the Delta.